I've now finished my Goblin army, using the figures that came with the Battle of Skull Pass box set (7th Edition Warhammer) together with a few additional items to create the more exotic units.

I've created all the likely options for a Goblin force and can now pick and mix to create 24 point armies to suit.


Fired with enthusiasm, I'm now building up an Empire army using a mix of figures I've had hanging around for years.😀

Not a lot more to say about these after my last post, but thought I'd post the finished articles for your amusement.

I've produced a number of elements using the Dwarves from thr Battle of Skull Pass boxed set, from which a 24 point HotT army can be selected.

The Blade & Shooter bases are worth 2 points each, the Hero bases are four points and the Artillery worth 3 points.

I managed to produce six Blade units, three Shooter units, a Hero base and a Hero (General) base and a single Artillery unit. Twelve units in total.

I also took the opportunity to have a go at designing a Movement Template/Widget. I was pleasantly surprised how well this turned out.

Every Army has to have a Stronghold. At 28mm scal this must be a minimum of 200 paces square (or 80x80mm). This is a good size for me as the intended storage box has compartments 87x87mm.

The rule book suggests that a Dwarfen Stronghold should represent a grand bronze door as an entrance to a cavern. A quick search on Thingiverse and I found both a cavern entrance and a rock face.

Combining these two in 3D Builder, with a 85x85x5mm base, created an excellent Stronghold!

All that was needed was a little sand, flock and fine gravel together with two miner's spades from the Skull Pass set.

All the base's upper surfaces were covered with PVA and fine sand, painted with a cheap "Craft" acrylic paint and had some fine gravel + Summer field flock added to finish them off.

Now on with the box set's Goblin Army together with some extras to complete arounded force like a Lurker, some Wolf Riders and Bats (Flyers).

The files I've created so far can be found here; https://www.thingiverse.com/thing:4786466

Posted by TimsTanks at 10:01 No comments:

Ideas for Playing HotT in 28mm

Ever looked at those old Warhammer World miniatures gathering dust and wondered what you could do with them?

Ever wondered how you might have a go at playing Hordes of the Things in 28mm?

Why not put the two ideas together and come up with one solution!! 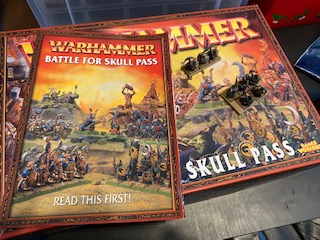 Yes, my latest "brainwave" was just this. It's not like I've already got a tabletop full of 12mm figures to finish painting, but you know what it's like when a new idea for a project comes to light!

I've always enjoyed HotT and have collected numerous 10 & 15mm armies over the years. I also have a fair few GW fantasy figures from the "Good old days". I always thought it would be fun to repurpose them for HotT, but never got around to the re-basing this would entail. 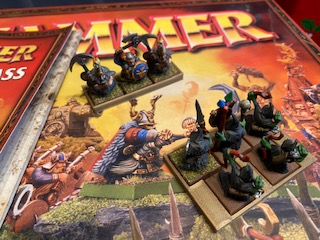 Enter the inevitable 3D printer. What if I could come up with sabot bases that would enable me to create HotT units simply by clipping the already based GW figures, into groups?

Well to be honest, it wasn't anywhere near as difficult as I thought, well not for those based on 20x20mm slotta bases anyway. 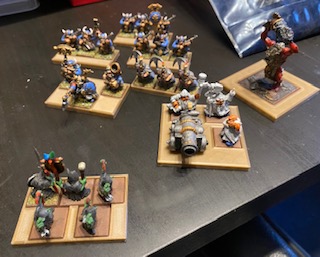 HotT units in 28mm are 60mm wide and a variety of recommended different depths - with a proviso that they can be as deep as required to accomodate the model.

So if I produce sabot bases 62mm wide I can accomodate three figures on 20x20mm bases side by side.  This works to produce all sorts of different units i.e. Hordes, Heroes, Artillery, Shooters etc. 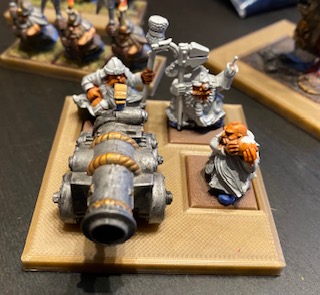 What won't work so well will be those figures on 25x25mm bases. Knights & Riders are ok - two mounted figures side by side - but foot units will only ever be two figures wide.

To prove the point I've taken my old unfinished Battle of Skull Pass boxed set and tried to create two HotT armies from the figures therein. All the foot figures are on 20x20mm with a few mounted goblins on 25x50mm slotta bases. 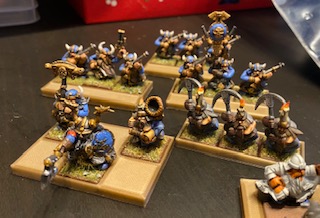 You can see the few test prints within this post. Painted the same base colour as their figures with the addition of some flock and you would hardly notice. There is obviously some tolerance in the base sizes as some are a tighter fit than others. Where they are loose a simple blob of blutac solves the issue.

I think this idea gives you the best of both worlds. It allows you to create 28mm HotT units easily, whilst still leaving the original figures unmodified and available still to play Warhammer if you should choose. 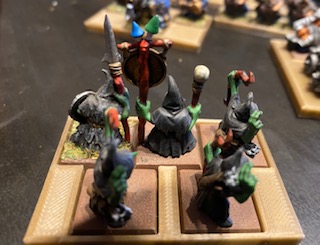 I will see where this takes me over the coming months and try and produce some 25mm base versions too. 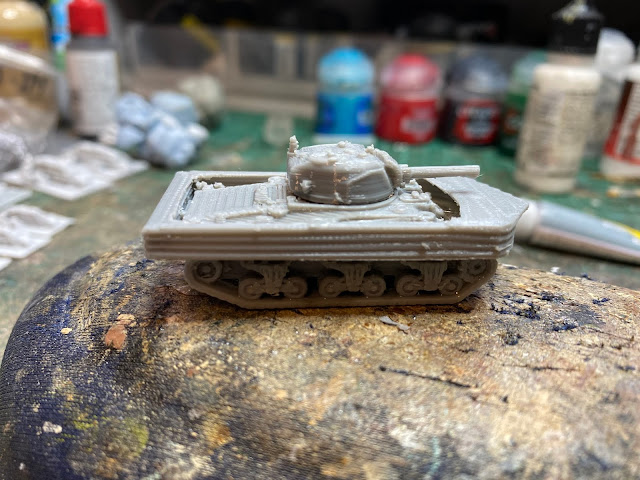 Well not a lot has happened over the last few days, except I've printed off a few experimental 1-130th AFV's for perhaps another project! 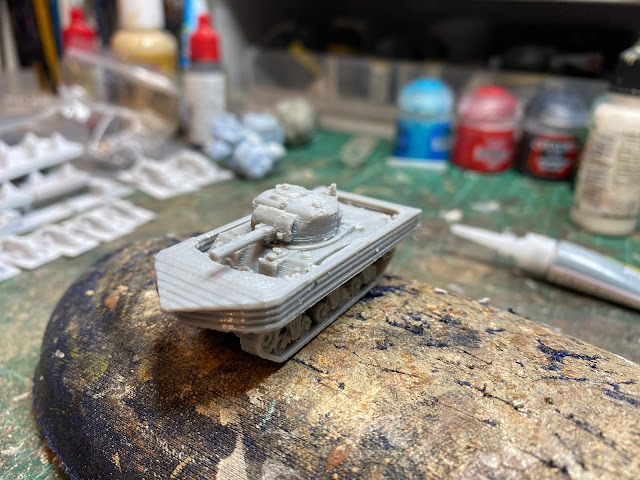 Minifigs US 12mm- Based for BKC II

Finished these figures the other day for use with my Late war US AFVs. 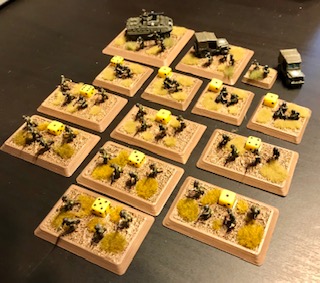 As mentioned before, I chose the Minifigs WW2 US Paras & Support weapons as their uniforms bear a resemblance to the late war M43 Combat Gear.

To suit BKC II I created a Command and HQ base with figures and vehicles and a two figure FOO/FAC base with a seperate Jeep.

The infantry pack stretched to 7 bases (each of four figures) together with two mortar and two MMG bases. All the bases have the addition of a 7mm die to enable lives/hits to be recorded when using the figures for a variety of different WW2 rule sets. 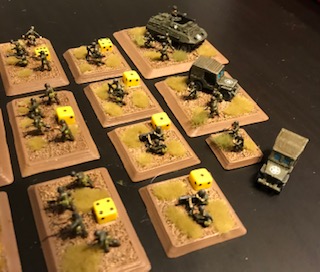 There were several more MMG & Mortar bases than I required, but I will repurpose these for my upcoming IDF army bases. 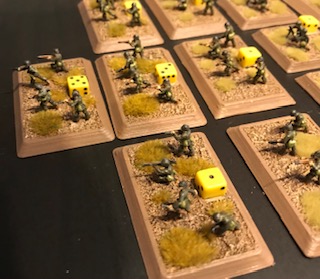 Minifigs are a good alternative/supplement to Pendraken figures. They are good value for money, well proportioned and detailed. If you don't need too many, they are a good way to collect a variety of figures without having too many left over.

As promised, here's how I based the Victrix British Infantry figures.

Whilst my usual method of mounting my 10/12mm figures on printed bases incorporating a 7mm dice to indicate hits/lives left would probably suit Rapid Fire rules, I decided to base these more in line with those shown in the Rapid Fire Reloaded rule book - i.e. 2 per square base. 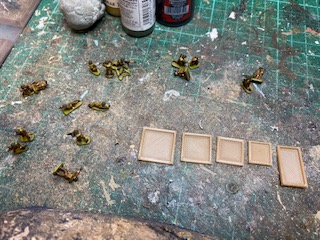 I printed a variety of different sized bases, all with a base thickness of 1mm and a raised lip around the outside edge of 2mm in height. 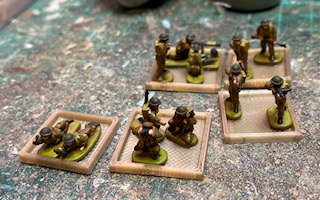 These I tried with the figures to find which worked the best and I decided on a 17x17mm for two infantry (standing or kneeling), 15x20mm for two prone figures and 20x20mm for crew served weapons and command bases (3 Figures). 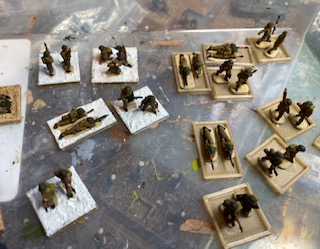 I secured the figures to the base with superglue and then built up the base to the level of the raised lip using artist's acrylic paste. I painted these in Vallejo Game Camouflage Green which is a nice summer grass colour. 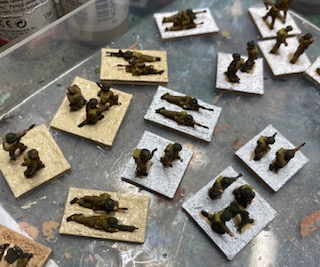 I wasn't happy with this finish for two reasons; firstly the acrylic paste settled too much when it dried leaving dips in the bases around the figures and secondly the green colour I had chosen didn't provide sufficient contrast for the figures to stand out when viewed on the tabletop.

Back to the drawing board.

I re-textured the bases using Vallejo White Pumice which solved the settling problem. Sufficient contrast was achieved by repainting with Vallejo Iraqi Sand, followed by a Brown Wash. 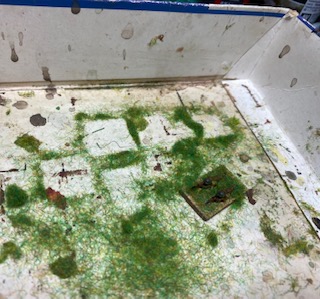 Once dry, the figures were sprayed with matt varnish on the only dry day we've had for about a month! 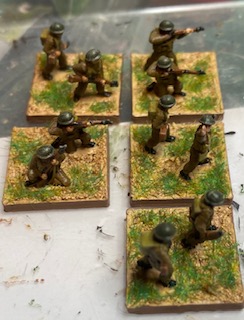 The final step was to apply a little Summer Green 2mm static grass.

I'm very impressed with these little figures and have treated myself to a couple of sprues of the German Infantry to match them, I'll post some pictures when I get them painted.

I can see sales of these figures and their associated AFVs getting a big boost when The Lardies finally publish Dave Brown's 'O'Group Rules later this year.

Whilst creating my late war armies it got me thinking about some of those post-war conflicts that used a mixture of WW2 and Cold-War equipment. 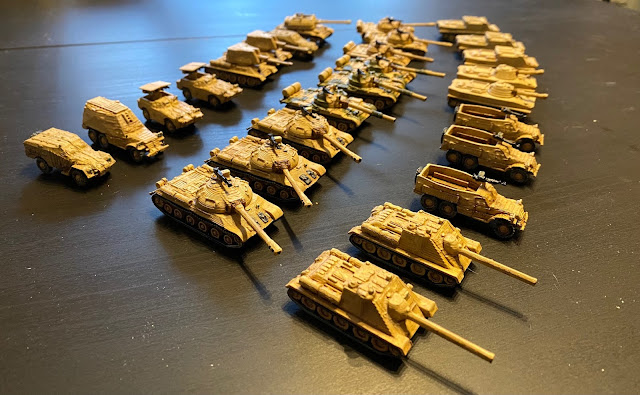 One that piqued my interest was the 1974 invasion of Cyprus. 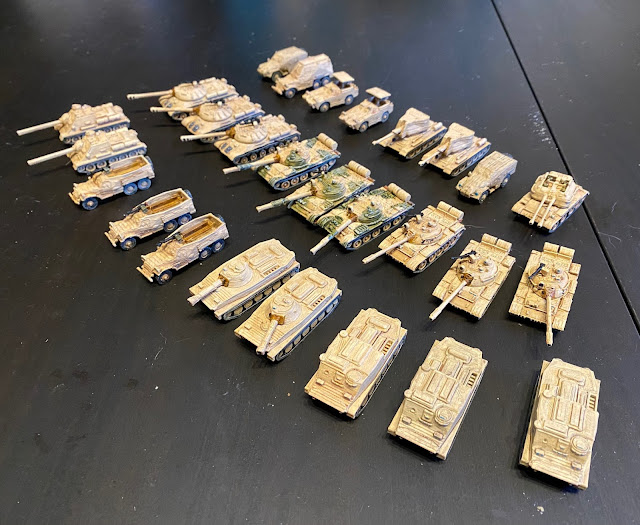 A couple of my work colleagues from the 1980-90's had been serving at UK bases when this happened and had many interesting tales from their time spent as part of the UN peacekeeping force. 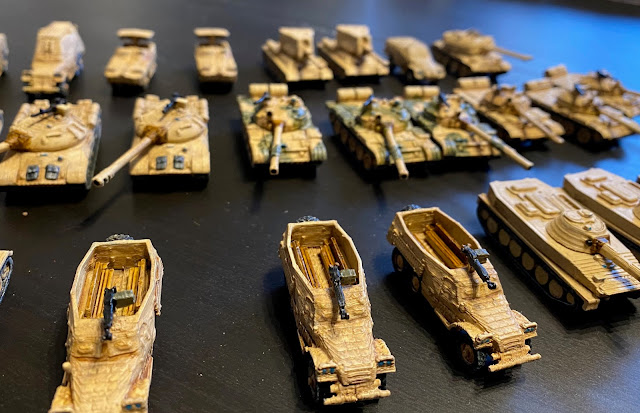 There weren't many armoured encounters, but those that happened involved some interesting vehicles. On the Turkish side there were M47's and M113's and on the Greek side a handful of T34/85's and some very old Marmon Herrington armoured cars. Could be an interesting excursion? 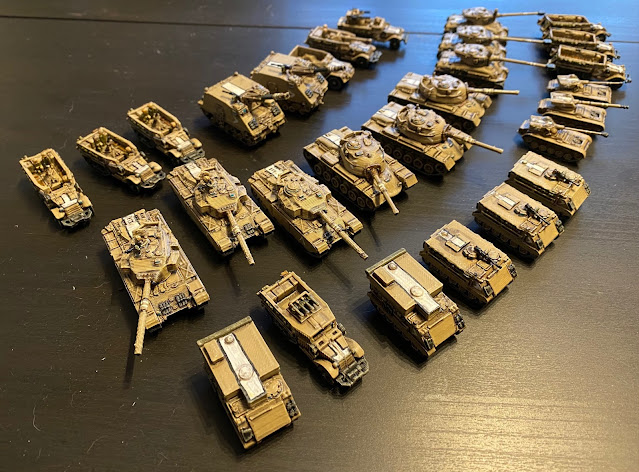 Similarly, the early India/Pakistan Wars with Centurions taking on M48s and Chaffee's, AMX13's, Shermans and of course the Vickers MBT. 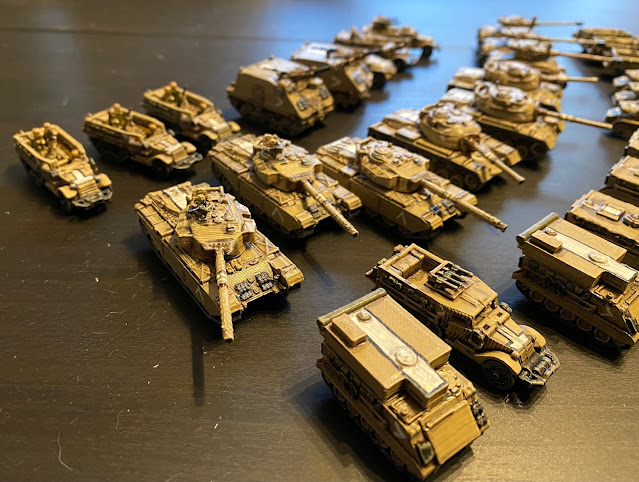 But to start off I decided to go with the Arab/Israeli conflicts of 1967-73.

Whilst the generic Arab army was made up of mainly straight forward late Soviet WW2 & Warpac vehicles from Bergman's 1-100 files the only unique addition was the 122mm SPG on a T34 chassis that I found elsewhere in Thingiverse. 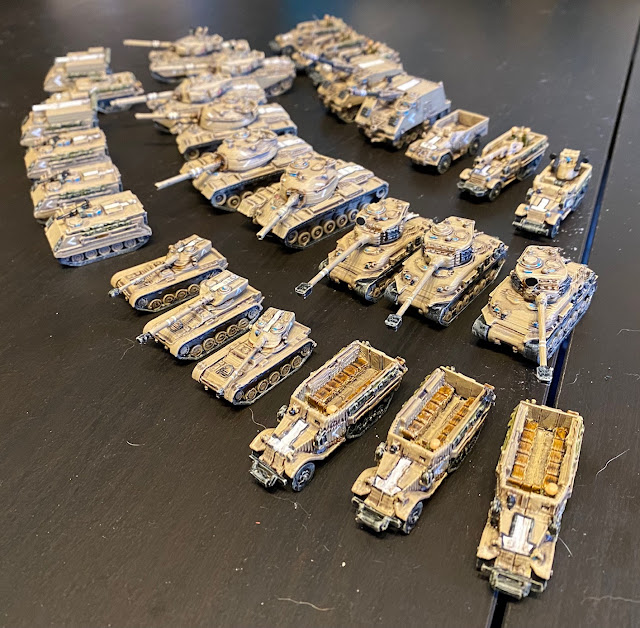 The Israeli forces however, presented lots of opportunities to try out some simple 3D sculpting! 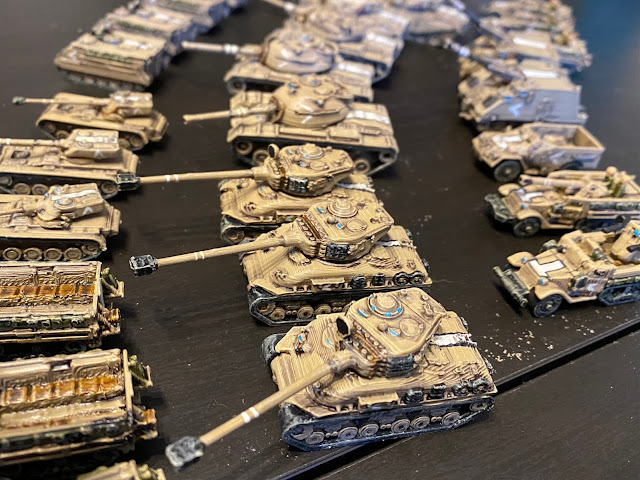 Obviously the M3 Half track is easy enough to come by, but it offers lots of variations you can add to your army. In my case a 90mm SPG (actually a Pak 40!), a ATGW version with SS10's (Taken from a BRDM1), 120mm Soltan Mortars (from a SDKFz251 mortar carrier) and a 20mm Anti-Aircraft Maxon Turret. All had additional storage added to the vehicle sides.

Other vehicles were found elsewhere on-line like the AMX13 and some were specifically IDF versions that had already been modified and uploaded i.e. replacement Diesel engined M48's and Centurions. I even found a couple of Fast Jets for air support!

Minifigs have provided infantry suitable for the two sides which one day I'll get around to basing......

Continuing the very late war theme I have also added a US Army too. 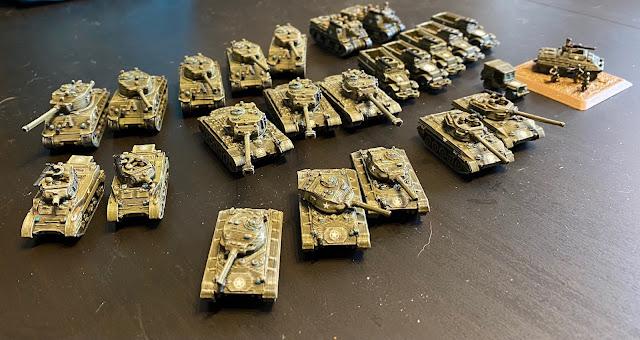 This one consists of;-

The Command Base shown in the picture consists of some Minifigs figures and a M20 Armoured Car. 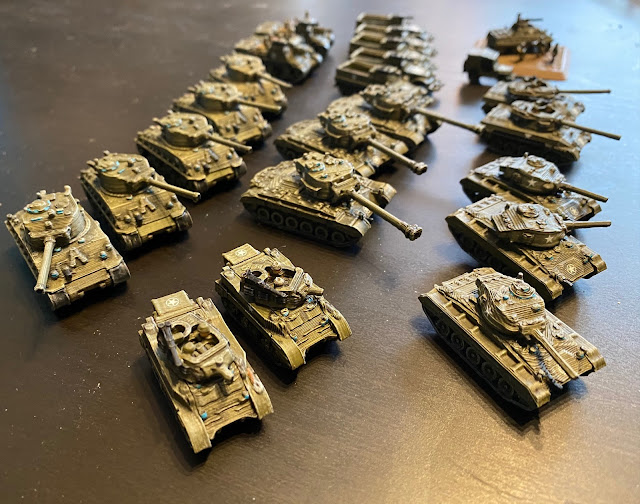 The infantry bases are all made up of Minifigs US Paras as I thought these looked like they are wearing the newer M1943 Combat Jacket/Trousers. These are nicely sculpted figures needing little cleaning up and quick to paint up. 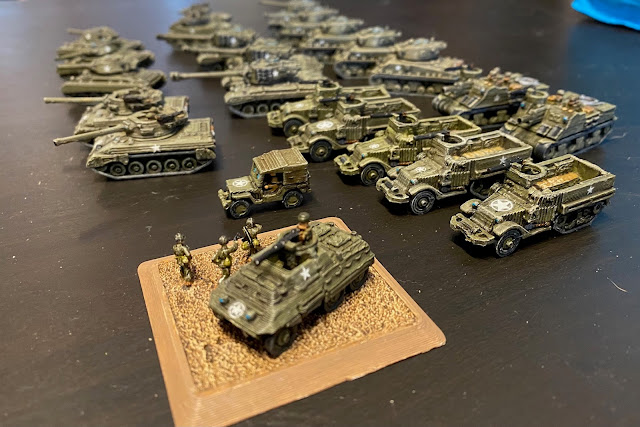 All these were created from Marco Bergman files that had been sliced up in 3D builder to minimise the cleaning up required and mazimise the detail.
Posted by TimsTanks at 09:16 1 comment: