Another terrain item in my drawer was an mdf kit for a terrace of three houses I'd bought at Colours way back in 2017!

Sadly, to my shame, I cannot tell you who made this, but I remember being impressed by the finished items on the stall which led me to make the purchase. 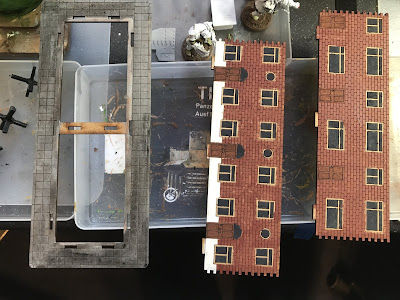 At the time, I thought their approach was novel as they included a laser etched sheet of card (pre-cut to size) to simulate the slated roof. Today this is quite a common approach, but not then.

The model was straight forward to build and makes into a one-piece building -  that is no removable roof to allow figures to be placed inside - although the bottom is open so you could place the whole model over figures if you wished. The model is mounted on a nice base that represents a stone slab pavement.

Unusually there are separate mdf window and door frames to add to the outside of the building. These stand a little more proud than the real items might, but they do add to the three dimensional look of the item. Sadly. one round frame was missing...too late to do anything about that...should have built it earlier!

The etched detail (brickwork, frames, doors etc.) are nicely rendered and give two alternative looks to the building - on one side the windows & doors are of a more modern design that the other.

The card slated roof was attached using double-sided tape. The first time I've tried this and it went extremely well. The card sticks down smoothly and evenly and is ready to be painted straight away.
The whole model comes un-painted and I opted to do the majority of finishing prior to assembly which I think was the best approach.

Finished, the building looks great, another addition to my 15mm terrain piece box!
Posted by TimsTanks at 09:36