So far, for my 1/130th Scale 3D Printed armour, I have been utilising a mixture of Minifigs and Pendraken 10mm figures based to (Primarily) suit Blitzkrieg Commander rules.

Two new things have appeared on the horizon that have got me thinking of other options for armour games. 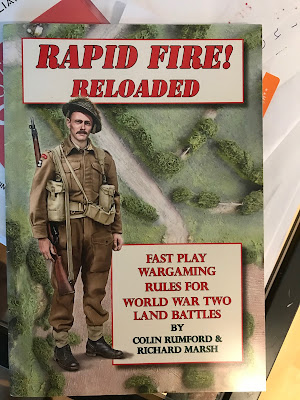 I shelled out my £5 for the new Rapid Fire rules and was really rather impressed. They are in a very well-produced, full colour, glossy papered pamphlet/booklet. The concept is really a very cut back version of Rapid Fire 2 – i.e., the bare minimum required to give you broadly the same results. The rules include O.O.B. for British & German forces for a Normandy Scenario which is also included at the back of the booklet. Now I’ve always shied clear of Rapid Fire basing before as they tend to put figures in pairs and remove individual casualties…. however, as a confirmed Wargame’s butterfly, this might present me with an excuse to purchase some of the new plastic figures from Victrix?

Internet research has revealed that their figures are packaged in what equates to roughly a company strength with support elements (MMGs, Mortars etc.) – or around 180 figures per box at £27. 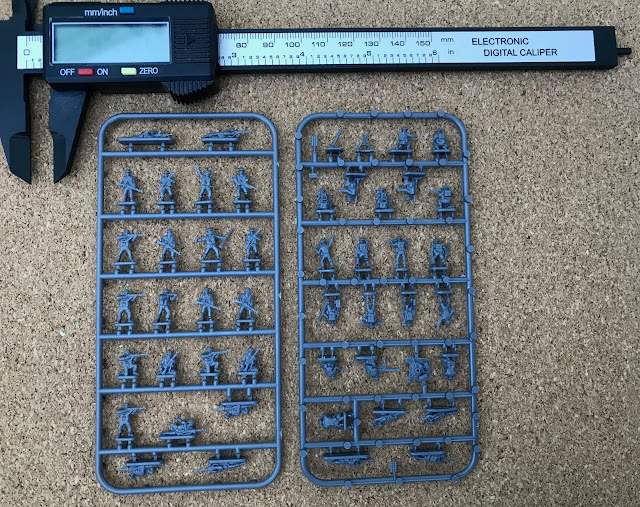 This works out about 15p per figure comparing very well to the metal manufacturers. I couldn’t really justify buying two boxes (£54 worth) of toy soldiers so turned to my old favourite…eBay.

As I suspected, I was able to purchase individual sprues at a very reasonable £7.95 delivered for one infantry & one heavy weapon sprue.

When they arrived, I was very impressed as well as surprised just how diminutive they were. They represent late infantry armed mainly with MkIV Lee-Enfields not SMLEs and have the later style respirator case on their hips. IF I had to criticise them in any way it would be for the lack of Bren Gunners. There are only two on the sprue (One prone, one advancing) when there is clearly enough figures for four sections on each infantry sprue.

They are crisply moulded in neutral grey plastic, with no perceivable flash to remove, so zero cleaning up.

They are reminiscent of the PSC offerings in their poses which I guess is part of the limitation of single piece mouldings. There are a reasonable selection of poses, with many individaul figures and at most only 2 duplicates of any one pose on a sprue. There are 23 infantry figures on the one sprue and a similar number on the heavy weapons sprue that include a MMG team, 3" Mortar Team, 2" Mortar Team, PIAT Team, Sniper, officers and rangefinders, a couple of mortar bomb cases and figures carrying up ammunition for both mortars and MMG. These latter two poses are (for me) probably the least useful but I'll base them up and use them as standard infantry.

The detail and proportion of the figures really is exceptionally good indeed. They are attached to the sprues only through their bases, so it is possible to paint them on the sprues which is a big bonus.

Obviously, some of the weapons are a little delicate at this scale so be careful when handling the figures.

I’ve decided to paint and base these figures to suit Rapid Fire, so have printed out some simple bases with shallow outer lips to mount them on.

I will then build the up the terrain level the match the figure’s base.

Painting is quite simple for the British figures as luckily; I still had a small amount of PSC Khaki primer in my rattle can to give them all a base coat.

The webbing was picked out in Vallejo Dark Yellow. The woodwork on weapons was given a coat of Vallejo Leather Brown and the metalwork and boots Citadel Matt Black.

Helmets and heavy weapons were painted in Vallejo Russian Green and hands and faces picked out in Flesh.

Then an overall coat of brown wash before basing.

I’ll do a part two when the basing is completed.