Early start this morning as we are driving South to Bayeux. First stop the Bayeux CWGC Cemetery and the Memorial to the Missing.
The largest British WW2 Cemetery in France, we took in Cpl. Stanley Bates VC's grave before marvelling at the largest collection of German burials we've ever seen within an allied cemetery.

Across the road the Memorial to the Missing listed 5 Hereford Regt. soldiers with no known graves amongst the others.
Next door to the memorial was the Bayeux War Museum. In the grounds was a stone commemorating Robert Capa the photographer responsible for the dramatic action shots taken in the opening  moments on Omaha Beach. 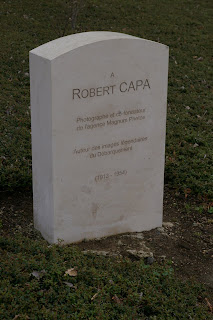 Also in the grounds were a Churchill Crocodile (less its armoured trailer), an M10 Tank Destroyer, an M4 Sherman and a German Hetzer Tank Destroyer.
Roland was back on form once more persuading 7 Scousers to join us as a "party" and getting the entry fee reduced from 7€ to 4.50€!!! This museum covered the entire Normandy campaign from D-Day to the German defeat at Falaise. Very good and well worth the visit.
Afterwards we take a walk around the town and have a Kebab for lunch before visiting the Bayeux Tapestry ..... Fascinating. 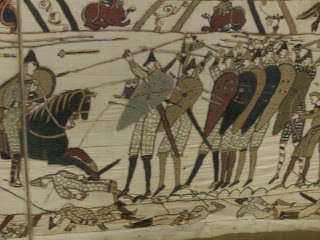 The temperature was now around 18'c so we spent the rest of the afternoon drinking Coffee and watching the world go by. Once we'd all finished we decided to venture out to Villers-Bocage about 15km south of Bayeux.
Here we were able to retrace Michael Wittmann's famous attack on the 7th City of London Yeomanry (CLY) on Hill 213.
Afterwards we stopped at the Jerusalem CWGC, which is Normandy's smallest cemetery with only 48 graves. The youngest soldier killed (Pte. Banks) aged only 16 is buried here.
For our final meal we decide to dine out on the harbour front on Port en Bessin. Going to be an early start tomorrow to get back to Calais.
Posted by TimsTanks at 22:01