The Hereford Model Shop has started to stock a lot more 15mm plastic stuff just recently to compliment their Battlefront FoW stock. This comes from the two manufacturers working in this scale currently - PSC & Zvezda - the latter as part of their "Art of Tactics" board game range. 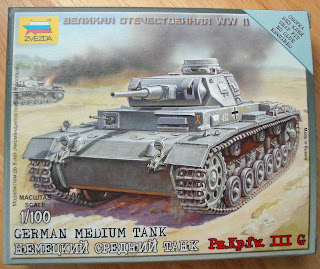 As part of my build up of forces to cover the various Crossfire scenarios in the book "Hit the Dirt", I decided I could do with some early war German Armour. The Zvezda Panzer III fitted the bill perfectly so I bought three of them! 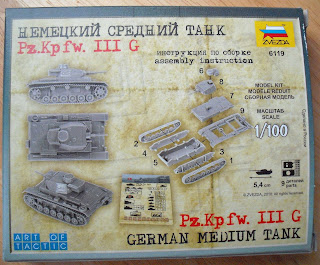 As per all the kits in the range, the model is neatly boxed with the rear of the package detailing assembly by way of an exploded diagram of components. 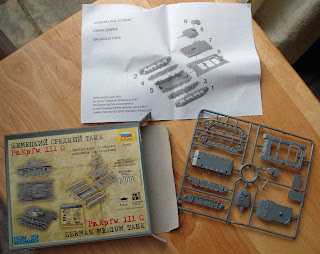 Inside there is a single sprue moulded in grey plastic, another assembly diagram printed on paper and the usual stats card for use in the game. 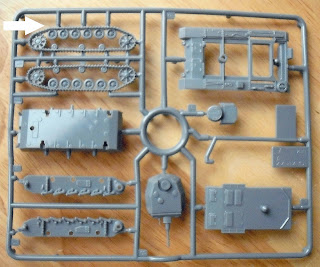 The moulding is crisp and there is little if any flash. The kit comprises 9 parts in total + there's a moulded flag you could attach for use in the "Art of Tactics" game. The plastic is not the hard type of plastic used by PSC and other model manufacturers, it's more flexible than that. This has positives and negatives - the fine parts will be more robust in handling, however the material is difficult to sand effectively.

You'll notice I've arrowed the running gear assemblies. This is because of the three kits I bought, two were like this sprue, where the tracks required you to cut through 10 runners to separate them. The other (a newer design?) had the tracks connected by just 5 runners - which was far easier to deal with.
Start by assembling the hull. The two hull sides are located by pins top & bottom. They are tight fits (I guess the kit is intended to be snapped-together) and you need to take care to make sure they are fully home. I assembled the kit using Hornby Polystyrene Cement which appeared to do the job, even though the model isn't made from normal polystyrene.

Next you can attach the running gear. Being in one piece this is potentially a very quick job! However with the 10 attachment points on the sprue to be cut through this is not the case. Each runner joins the track in the dip between a track link and the waste plastic is quite difficult to remove (see picture above). It won't file off because the plastic is too flexible, so the only answer was to carefully trim it away with a sharp knife. In the end (as I'd three of these to assemble) I hit upon cleaning the front and back ones carefully with the knife but leaving the top and bottom ones alone, as they'd be either under the mudguard or on the base - both out of sight.

Now most of my reference material show the road wheels as being in pairs like the Panzer IV. These however are single wheels - is this a variant I'm un aware of or just a restriction of a one piece moulding? I'm unsure, but to be honest when completed you won't notice on the table. 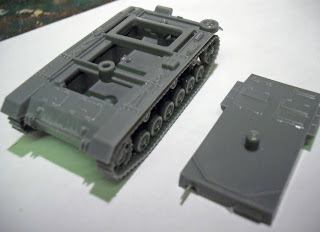 Now attach the hull top pieces. First the mudguards and glacis plate unit was attached, followed by the hull top. The latter has a finely moulded MG barrel in place so take care! All the pieces are easy to fit as the locating pins/holes only allow the model to be assembled one way, This is the hull complete! 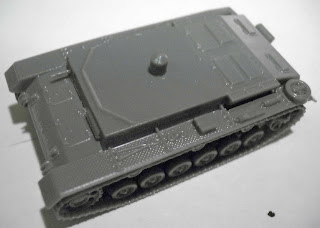 Close examination of the hull top parts reveals tooling markings where the mould has been milled out, however these are so fine that they don't show through once you've given the model a coat of primer.

All that's left is to assemble the turret. This is moulded in two parts - turret + cupola/stowage box combined. The cupola simply pushes onto the locating pin at the reart of the turret part. This is quite a tight fit and I couldn't get it to go fully home on any of the three I assembled. This doesn't show up too much on the finished model. If you try and use cement then this holds the cupola up even higher still - so probably best just push-fitted. 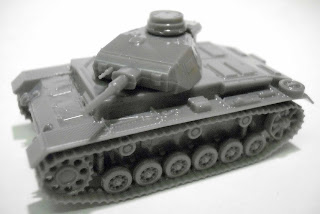 And that's it!  A finished tank. 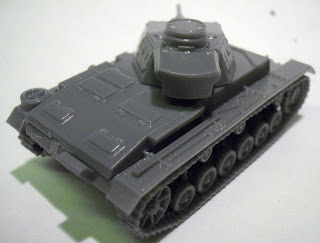 The turret is a good tight fit, but still rotates OK. Alongside a FiB French infantryman, it looks to be to scale. Time now to get them painted...... See Part Two for details!
Posted by TimsTanks at 22:35