Well it was that time of year again.....the annual visit to Penarth Leisure Centre to have a look around Crusade. It's not a bad little show, but to be honest I had had enough after 2 hours. Where something like WMMS keeps me going for 6 hours or more.

The Leisure Centre is a bit cramped, the traders taking up half the hall and the demo games are crushed together in the other half. A good mix of games (IABSM demo etc.) on show, but hard to move between them to view them at their best.

By my reckoning, the traders seemed to primarily be selling terrain pieces, but I could be wrong. Surprisingly, there was little eveidence of 15mm Flames of Warhammer, in fact most WW@ was 20mm. Not very much that was really new, but it was nice to see MJ Figures there for the first time - a chance to finally get a few more Falklands 15mm figures!

As well as this there were the usual military history displays, Napoleonic & DBA competitions, lectures and of course the Bring & Buy.

This was well stocked (though I don't think there was as much on sale as last year), but there were few true "bargains"- I guess people can't afford to part with their unwanted goodies for peanuts anymore. All the same I managed to find a hardback book on WW2 Fortifications for a pound and a Baccus Polemos Napoleonic wargames starter set for just £35! 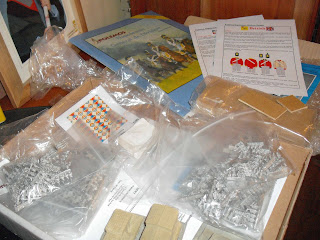 This set retails at £95 and comprises the 2nd edition Ruleset, painting guides, two armies (each consisting of 10 Foot bases, 12 Cavalry bases & 4 Artillery - about 700 Figures in total), 3 Timecast buildings and enough pre-cut mdf bases for all.

After the fun I had with the ECW rules from this stable, how could I resist trying the Napoleonic version?
Posted by TimsTanks at 20:43