Having taken a look through the rule books at Colours, I hurried home and placed my order. 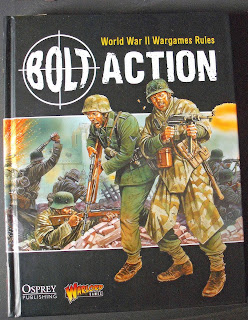 Initial look gives me a WW2 40K kind of feel. But I'm not put off by this as I like the idea of an easy to learn game with a WW2 feel - which is what most reviewers seem to be saying.

I also like the idea of small army sizes - I like collecting & painting figures more than anything so these rules will give me bags of excuses to carry on.

The big question is what scale?

I bought the Warlord 28mm Germans as soon as they came out, assembled and painted them.

But now I've sold them in favour of the Crusader Metal figures I picked up from Ian Allen Bookstores, for a song.

Nice chunky figures that are easy to paint, I bought these and the Brits for just £28 the two boxes (24/box)

These are perfect for Bolt Action - with a box of infantry, heavy weapons and 45mm anti-tank guns you've got more than enough for a 1000pt army for less than £50.

Ok, so the detail doesn't quite measure up to Warlord's standards, but they're adequate. 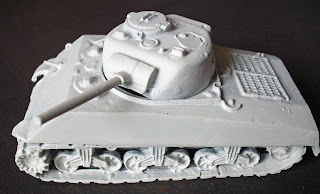 But now I've pre-ordered the new Flames of Warhammer Starter set.....just for all the nice miniatures.....