Now for the tricky bit, making the hedges.
I was persuaded by my dear wife to purchase some rubberised horsehair from a very nice man we met at the recent IPMS show near Bristol. He took us through his hedge making methods and showed us the examples he'd made on his stand...and we were sold.
To be honest I'd often read about rubberised horsehair and its mystical properties where model making were concerned. As I'd never ever seen it anywhere for real I wondered if it really existed, but here it was and you could buy various different sizes of pieces too. I also learnt that it is still used in the furniture making business so if you have any local upholsterers you may already have a source?
This particular piece was 25mm thick, 150mm wide and 460mm long. And only cost £8. 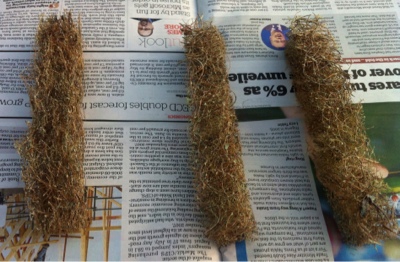 Having teased the edges a bit by hand to give the hedges a slightly more natural look, I sprayed them with matt black paint. 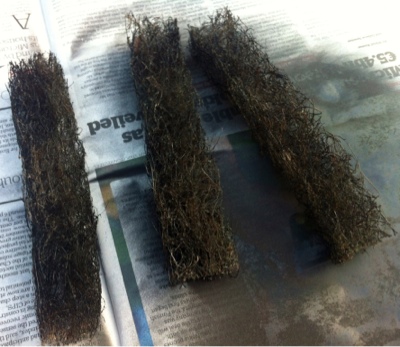 Once dry I sprayed them with some spray mounting glue I bought cheaply at a Wilkinsons Store (£3 I think) before dipping the hedges in flock. The flock was some really old stuff from Games Workshop that I'd had lying around for years. 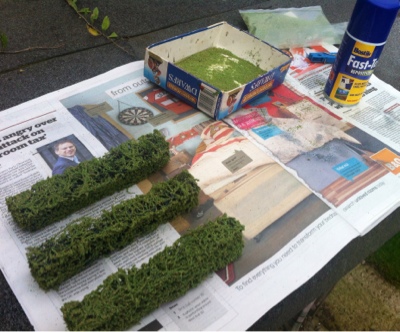 It was a fairly lightish green but doesn't look too bad once applied. The spray mount I was to find to my cost, never actually dries completely. However when I thought it seemed dry enough, I sprayed the hedges with some very dilute PVA via an old pump atomiser (ex-air freshener I think) to seal the flock in place. I then left them overnight to dry.
The guy on the horsehair stall used ordinary hairspray to attach the flock.....maybe I'll try this next time? 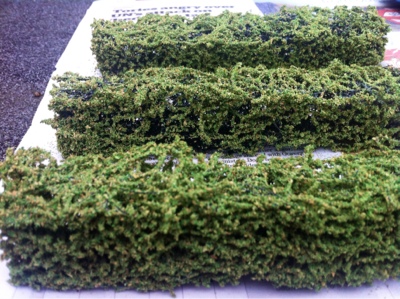 Once dry it was time to attach the hedges to the banks. I used high tack PVA for this. 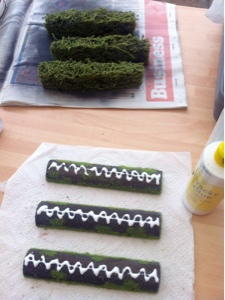 I was worried that gluing a flat bottomed hedge to a round topped bank might result in a poor bond, so I placed some weight on the top whilst the glue set, to maximise adherence. 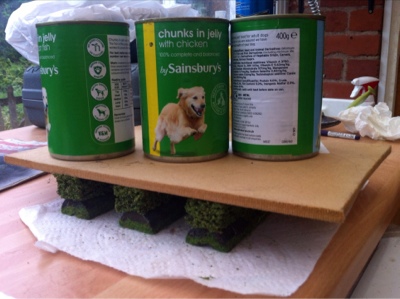 The next morning I discovered that the spray mount still had some life in it! When I lifted off the weight, the hedges, whilst well glued to the banks, stayed squashed down as flat as a pancake. :-( 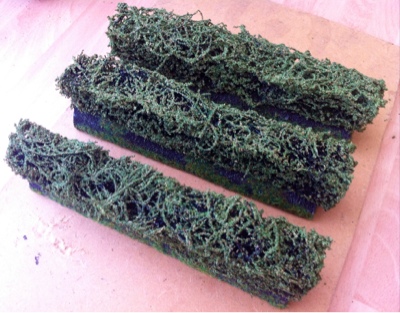 A bit of judicial tugging and teasing saved the day and got them back to their full height (phew).
So there you are....finished 150mm lengths of bocage. Each cost me about £1 to make.
See the finished article in part three.
Posted by TimsTanks at 22:16