Having never been to see  the site of the Doullens Conference of 1918 , this was to be the starting point for Day Four of our Tour. The rest of the plan looked something like that shown below. 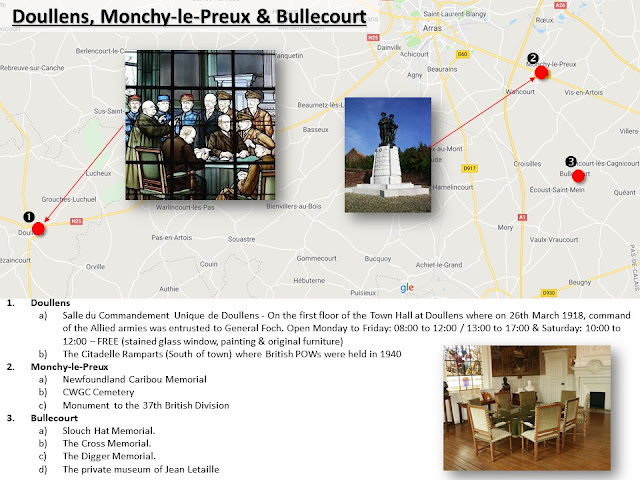 The Doullens Conference was held in Doullens, France, on 26 March 1918 between French and British military leaders and governmental representatives during World War 1. Its purpose was to better co-ordinate their armies' operations on the Western Front in the face of dramatic advance by the German Army which threatened a breakthrough at that moment of their lines during the War's final year.


The conference was successful in forming a more unified command. It agreed the creation of an Allied Commander-in-Chief with the power to co-ordinate Allied operations collectively. The members attending the conference believed that General Ferdinand Foch was the most qualified figure for the nature of the role, and placed him in executive charge of co-ordinating the operations of the Allied Armies on the Western Front. (Source: https://en.wikipedia.org/wiki/Doullens_Conference)

Following this, we made our way to Monchy-le-Preux.

This village was one of the keys to the northern end of the Hindenburg Line, giving the Germans ideal observation over any advance from the British trenches in front of Arras five miles away. Third Army’s commander, General Sir Edmund Allenby, ordered the capture of the village and surrounding high ground, as objectives for the first day of the offensive – 9 April.


North of the village, Essex Yeomanry and 10th Hussars, supported by the Royal Horse Guards, galloped eastwards, looking to exploit any breakthrough.  Meeting machine gun fire, they veered into its streets, as ordered and then ventured out once more to escape shelling this time, only to be driven back.  The arrival of the cavalry in the village enabled the struggling infantry to establish a defensive firing line.  By deepening shell holes, deploying machine guns and establishing two dressing stations, the dismounted cavalry stiffened the infantry’s resolve.


They provided rapid reinforcements, leadership and organisational proficiency at a crucial time, before the arrival of tanks and infantry secured the village.  600 cavalrymen were casualties and many more horses died. The animals were tethered in the open, as their riders took cover, while attempts to take them to the rear during a ‘box barrage’ only increased the killing.
(Source:- http://ww1centenary.oucs.ox.ac.uk/battle-of-arras/%E2%80%98war-horse%E2%80%99-at-monchy-le-preux-%E2%80%93-11-april-1917/)

Next we ventured to Bullecourt. Whilst we have no connection to the Australian forces, it was a battlefield we had never visited before.

South of Arras, the plan called for two divisions, the British 62nd Division and the Australian 4th Division to attack either side of the village of Bullecourt and push the Germans out of their fortified positions and into the reserve trenches. The attack was initially scheduled for the morning of 10 April but the tanks intended for the assault were delayed by bad weather and the attack was postponed for 24 hours. The order to delay did not reach all units in time and two battalions of the West Yorkshire Regiment attacked and were driven back with significant losses. Despite protests from the Australian commanders, the attack was resumed on the morning of 11 April.


After the initial assault around Bullecourt failed to penetrate the German lines, British commanders made preparations for a second attempt. British artillery began an intense bombardment of the village, which by 20 April had been virtually destroyed. Although the infantry assault was planned for 20 April, it was pushed back a number of times and finally set for the early morning of 3 May.


German resistance was fierce and when the offensive was called off on 17 May, few of the initial objectives had been met. The Australians were in possession of much of the German trench system between Bullecourt and Riencourt-lès-Cagnicourt but had been unable to capture Hendecourt. To the west, British troops managed to push the Germans out of Bullecourt but incurred considerable losses, failing also to advance north-east to Hendecourt. (Source: https://en.wikipedia.org/wiki/Battle_of_Arras_(1917)#Battle_of_Bullecourt_(3%E2%80%9317_May_1917))


Then on our way back to the gite we stopped off in Auchonvillers for tea and then went for a walk around the Newfoundland Park. Another fantastic day...