What else have I been up to?

Well having just been in hospital for a few days I now have a new knee joint and plenty of spare time to get on with some painting and blogging!

Another Forged in Battle item I acquired from Firestorm Games in Cardiff, was their Tiger 1.  As with all their range, the hull is cast in one piece from cream resin with integral base. 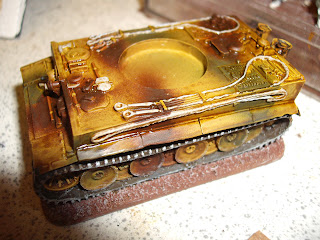 The detail is exquisite making this a pleasure to paint......and that's all there is to do to the hull as there's no assembly required whatsoever. 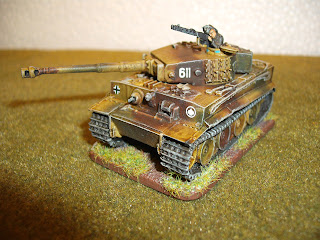 The turret is cast in white metal as is the separate 88mm gun, commander's hatch and the optional commander figure with integral MG42. These need a little cleaning up (just trimming mould tags really) and then assembly with superglue. The weight of the completed turret gives the whole vehicle a bit of heft not too dissimilar to a Battlefront effort. The tank markings came from left over decal sheets from Dragon 1/144 German armour kits. These, whilst slightly small, look the part and are far better than my hand painted efforts! 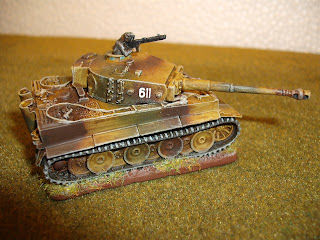 All things considered a fine little model. At just £6.75 (with Firestorm's discount) this presents very good value for money I feel. If you buy a platoon of three together they work out even cheaper.

Also as I move towards collecting sufficient equipment to game D-Day actions I need to start acquiring some "Funnies" for beach clearance. 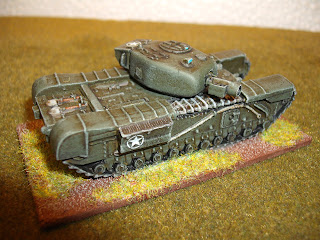 The first of these is the Battlefront Churchill AVRE complete with Petard mortar. This I guess is one of their earlier efforts that is still in production? The fit of parts needed quite a bit of attention and left some big gaps to fill. As with many of their vehicles the two track units are cast in white metal while the hull and turret are grey resin. The gun, hatches and optional commander half figure are also in metal. The track to hull fit was particularly poor leaving a noticeable gap between the upper exposed sections of track and the hull. 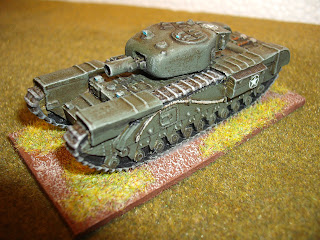 All this aside, I am more than happy with the finished article. Yes it could have had fascine mountings etc. but it looks the part and will fit in nicely with my other armour. The allied stars were bought from QRF who do packs of two sheets for £2/pack - a bargain! I know that most British vehicles didn't display many if any allied stars, but I think they help lift what can be a rather bland plain green model into something a little more eye catching. I call it artistic licence and the "Rivet Counters" will just have to get used to it!