For a number of years I have had the idea that I would like to put on a demo game of one of the major infantry actions of the Falklands war - perhaps Goose Green or Mt. Longdon.

This was put on hold because I couldn't find suitable rules (I'd even had a go at writing my own) nor were there suitable figures.

About 3-4 years ago I came across the MJ Figures range of Falklands 15mm figures at a WMMS show. Now there was a source of suitable figures all I needed were some rules.

With the introduction of CWC this became a reality, so I quickly got my order into Shieldwall Games who distributed the MJ Figures range.

I eventually got my order after a bit of a wait and set to painting them up. 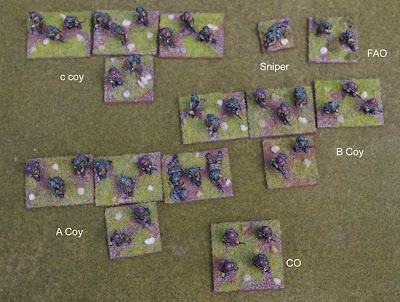 To start with I ordered enough Paras/Marines to start making up a Battalion of four companies. Each company has three infantry bases (each representing one platoon) with an HQ base. As you can see I had enough figures for three companies at this figure ratio with a CO base (four figures), an FAO and a Sniper base. 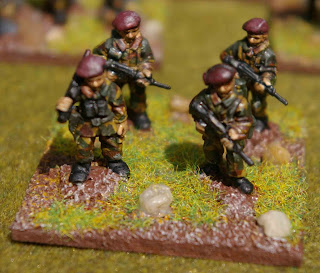 The figures are very well sculpted. Capturing the character of the British Infantry of that time perfectly. Figures are mainly armed with SLRs and equipped with '58 Pattern Webbing. The range has a core number of sculpts, and these are then available with helmets or berets and with/without Bergans. The metal they are cast in is a little brittle so you had to be careful when straightening those rifle barrels. 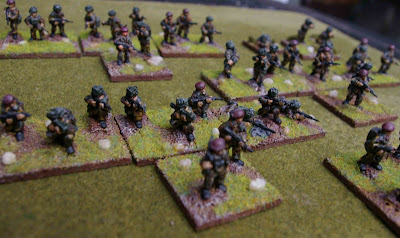 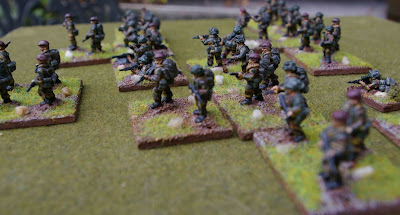 As I remember, the range also included the Scimitar Light Tank, 105mm Field gun and some Special Forces figures.

There were also Argentinian Troops to match. Though this range was slightly less structured. Every pack seemed to include at least one 3.5" Rocket launcher and overall the mix of poses/equipment was less useful. they did, however look the part in their parkas with goggles mounted on their helmets etc. 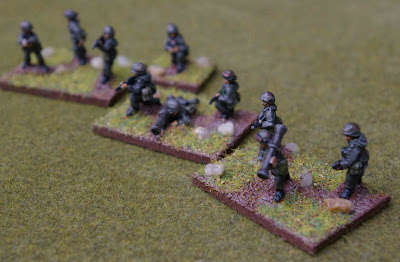 I just bought myself one pack to be going on with, but I think there were also packs of dug-in troops, 105mm Light Guns and Panhard Armoured Cars available in the range.

Sadly, Shieldwall Games seemed to disappear. At the time, there were a lot of quite irate posts on TMP about undelivered orders etc.. and that seemed to be the end of my dream.

Geoff from QRF has been promising a Falklands range for a couple of years but nothing has appeared just yet and to be honest there weren't any other ranges of figures that fitted the bill.

Imagine my excitement when I stumbled on this website MJFIGURES.CO.UK the other day!

Yes they're back (well almost). I contacted Mark via the site and he hopes to have the range back in production by September 2011.......I can hardly wait.
Posted by TimsTanks at 12:42