Crossfire Preparation for Next Game

The next game planned is another scenario from the excellent "Hit the Dirt" book - Assault on Tula, on the road to Moscow. 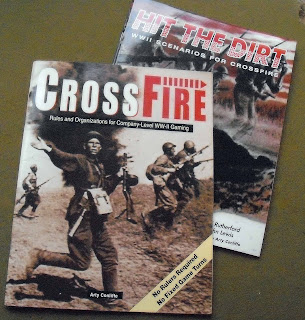 Set in October 1941, this will pitch a 2 company battalion (supported by 3 STUG IIIGs) of the Grossdeutschland Infantry Regiment against a scratch Soviet company with support elements dug-in around the outskirts of Tula.
In preparation I've been painting like a mad thing to get my German force ready so I can give them an outing.
The core of this army was the Forged in Battle Waffen SS infantry I'd originally intended for BKC. I simply rebased the NCO figures as PCs and split the HQ base into a CC base and a 50mm mortar base.

In my lead mountain I had the FiB 81mm Mortar and HMG sets, so I set about painting them as soon as I could to give the army some fire support.
The BC base was simply the HQ base I'd made already for BKC with a FiB Kubelwagon and some Peter Pig figures I'd had stored away for years.

In fact to make up the battalion I repainted a further 35+ PP figures and rebased them on mdf as the second company. I had originally based and painted these for PBI some years ago - but to be honest my painting skills (and particularly my basing skills) have moved on such that I couldn't live with them any more! In front of the BC base are two FO's for the 81mm & 50mm mortars and to the left a SMG squad for protection. 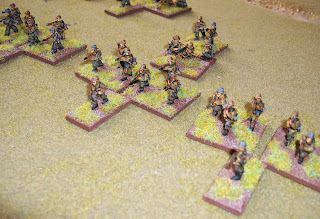 The Peter Pig company is made up of 3 x 2 squad platoons with PCs. The CC has a HMG in support.
The FiB HMG teams are very well sculpted. The MG42 is slightly inaccurate with holes in the barrel jacket down both sides, but isn't the end of the world. The loader figures are really sculpted to feed from the right which is the wrong side. If you look on FiB's website they've assembled their painted samples incorrectly. However you can reposition him to the right quite successfully instead. The third figure in each team, is either an NCO directing fire or a figure pulling a spare barrel out of it's case - nice touch!

The Fib 81mm Mortar teams are also very well sculpted. Each team has a mortar and three crew figures to serve it. 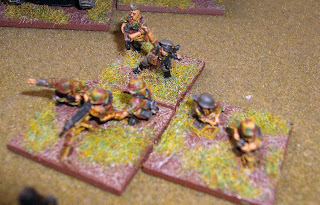 The FiB based company has the rather animated Officer figure as their CC, a 50mm mortar team  and HMG team making up the company command group.

Strictly speaking the army list states the armour support should be Panzer III's - but as I don't have any this is the best I can do. Let's hope Si's OK with this!
Well that's it. They're all in the Really Useful Box ready to Rock-'n-roll - let's hope my dice rolls are a bit better than last time and I can get my head around commanding this many figures? Battle report to follow.........