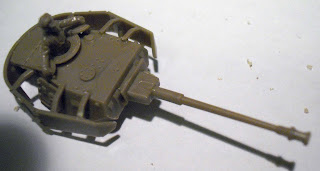 The turret goes together simply. There is a turret top and bottom, rear box, Schurzen plates and gun barrel to glue together. You then have the choice of open/closed commander's cupola and a choice of two commander half figures. One figure wears a side cap and is head and shoulders out of the hatch. The other wears an officers cap and is proud of the turret holding the two hatch halves with outstretched hands - a classic tanker pose!

The gun barrel can be drilled out with a 1.5mm bit to give a little more realism. 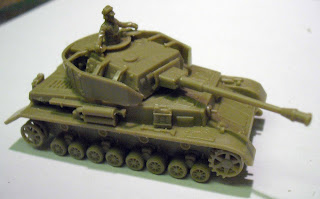 Now with the three sub-assemblies complete I could put the vehicle together to check the build so far. 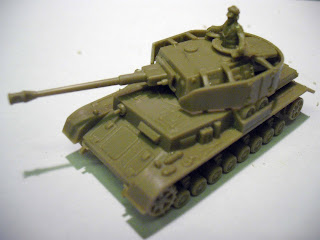 The fit of the upper and lower hull parts looks perfect and the turret is a good tight fit.
Next to the painting process. First everything was primed white. 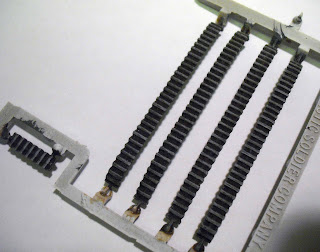 The tracks were painted on the sprue - dark grey followed by sepia wash and finally dry brushed light grey. This include the short length of spare track for the front of the vehicle. 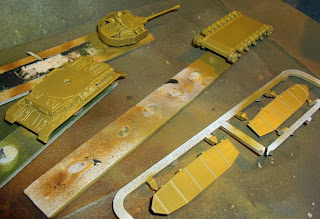 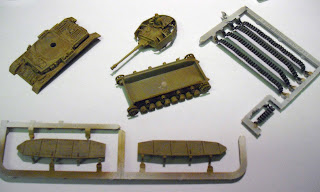 Now they're all dry the final assembly can begin. 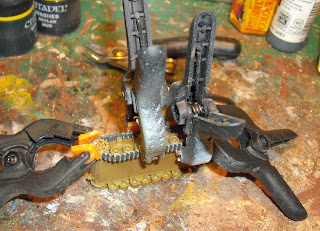 The track links have moulded guides on the inner faces to help locate them between the two halves of the Drive Sprockets and Idlers. There is a top run of track for each side which undulates between the return rollers and a straighter length to go on the road wheels. With the addition of the paint (3 coats including primer!) I've made fitting these a bit more difficult for myself. At first it didn't look like they'd actually meet! However, with a little care they soon fitted correctly but needed clamps to hold them in place while the glue went off! See Above. 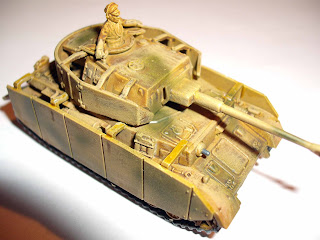 Once the track links were fitted the upper hull can be glued to the lower and the Schurzen plates attached. The plates are cleverly grooved to allow them to be glued to the edge of the mudguards. This means that they are quite strongly attached and not just dependent on the four brackets! These incidentally, glue to the top of the hull.

The camouflage pattern I chose is just lightly sprayed panzer green random lines. More than ample on such a boxy vehicle. You can just see the spare track links on the front. I had to trim them slightly to get them to fit between the tow brackets, but this is more likely the three coats of paint than it being moulded too big! 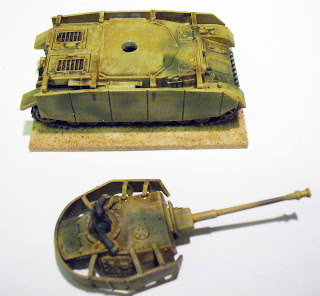 The vehicle was based on mdf from Warbases with a coating of PVA and sand. The commander painted dark grey and washed black to simulate his black uniform. 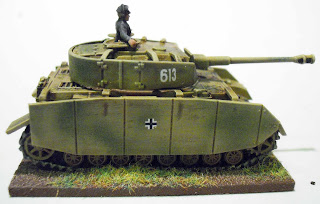 The decals came from a Dragon 1/144 kit but look fine I think. The turret hole in the hull top was enlarged to make the turret turn freely. I had to do this because when it was a tighter fit, every time I turned the turret I broke the Schurzen brackets off the turret roof. 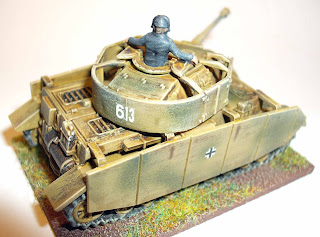 The exhaust was painted in Vallejo Smoke glaze which simulates rust beautifully. 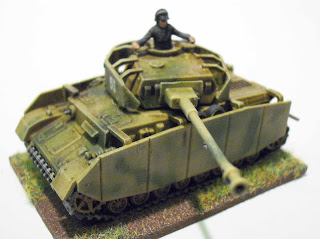 The base was finished with the usual coat of dark earth followed by dry-brushed buff. Two coats of varnish are sprayed on to protect when handling and finally some static grass glued on with PVA.
I don't usually do the comparison thing (mainly because I don't have the vehicles to compare!) but this time you're in luck. The next few pics show the PSC Panzer IV alongside an old Panzer IV from Battlefront.
Without reaching for my steel rule, they look to be a good match and would easily sit well alongside one another on the table.
And there you are, all finished.