When I bought the Panzer IIIs I couldn't resist buying just one half-track to go with them! I've always loved the look of the German armoured half-tracks - my favourite scene in "Saving Private Ryan" is when the US Paras knock-out the rather rattly Sdkfz 250 in the field of crops just before they find Ryan for the first time. 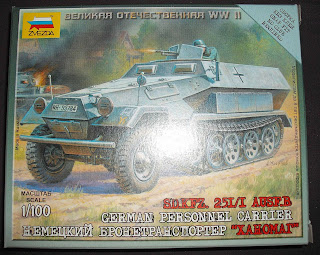 I've been patiently waiting for the PSC kits of the Sdkfz 251 Ausf D's to go with the Battlefront example I already own, but as I'll be painting them up in Dark Yellow for late war scenarios, I thought I could treat myself to an early example to be finished in Dark Grey to go with my Panzer IIIs. 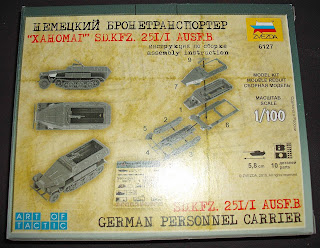 The box has the usual exploded assembly diagram on the back together with three views of the finished article. 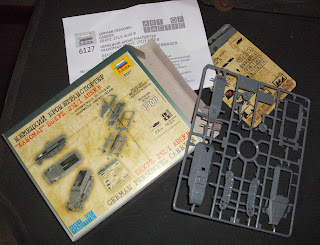 Inside the box there's the single sprue (moulded in the same flexible grey plastic the Panzer III's were made from), the "Art of Tactics" data card and a sheet of paper with H&S advice like don't eat the model etc.... 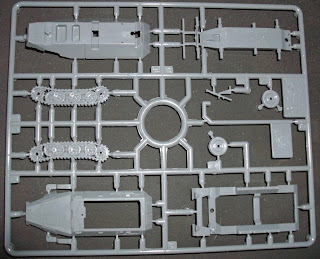 The sprue is nice and clean with little if any flash. The kit comprises 9 parts including the little MG34 + the usual flag. The sprue is quite busy and, as with some parts of the Panzer III,  there are a large number of runners that all have to be cut through to release the parts. With this being a small model, there is little room to do this with side cutters, so I had to get in there with the knife.....if you find the same problem take care! 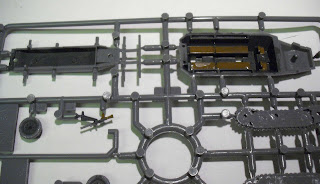 After washing the sprue in washing up liquid to remove the mould  release agents and leaving it to dry overnight, I decided to pre-paint the hull interior as it would be impossible to do so after assembly. The lower hull is well detailed with driver & co-driver seats, side-mounted bench seats and behind them, stowage bins for the crew's kit. 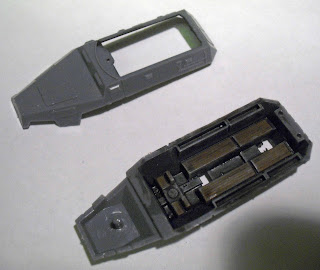 Assembly starts with the hull top and bottoms being removed from the sprue. The runners join the parts on the very edges of the side armour plates, so you need to take care cleaning them up to ensure you still have that nice straight edge on the angled joints. I tried filing them off with emery boards, but the soft plastic doesn't sand effectively. In the end I trimmed them very carefully with a sharp knife. 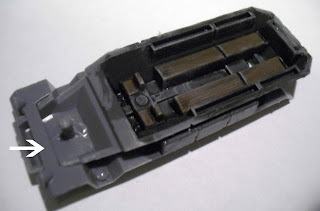 The next stage I found somewhat fiddly. This may just be my big fingers, but all the same it needs care. The front & side mudguards are moulded as one piece. To assemble them on the model it is necessary to feed the front of the lower hull underneath the bar separating the two front mudguards (see arrowed above) and the clip the hull into place. 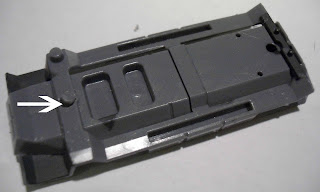 To do this you need to locate a pin moulded in the lower hull (see arrowed above) through a hole moulded in the mudguard assembly. This wasn't easy as the plastic was too flexible and deformed as I tried to get it through the hole. I got there in the end, but as before, take care! 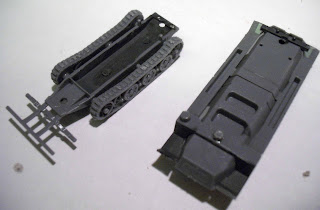 Next assemble the rear track units onto the chassis. I painted the inside black because I thought it might be visible through the floor. 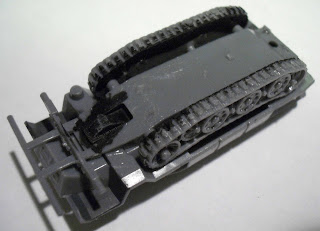 The finished chassis was then attached to the lower hull. The front wheels were left off and only attached after completion of the painting process. They were painted, seperately, while still on the sprue. 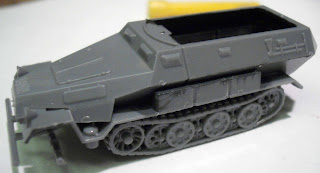 Finally the upper hull was attached and the model is now ready to paint. 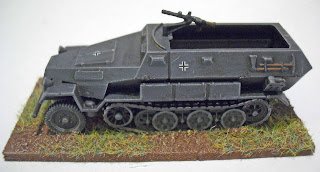 Once painted (as per the Panzer III see previous blog entry) the MG34 was fitted together with the front wheels. You'll see from the sprue, that this is the only armament supplied with the kit.

I've seen only one picture with this type of MG bracket mounted on the front rather than the rear - this was captioned as an Ausf A (see above) - so I'm not certain how accurate the kit really is. If you buy a FoW crew you'll get a gunner so it doesn't realy matter - but if you don't you're stuck with this! The Jerrycan came from a PSC Panzer IV. 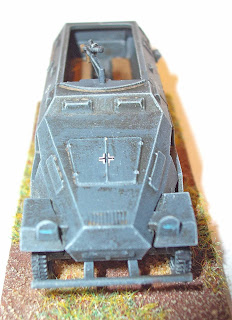 The model was based on mdf in the same way as described for the Panzer III. The decals came from Dragon 1/144 kits once again. I think that the only difference between the Ausf B and more common C is the access hatch on the nose plate (see above). I guess this could be easily removed with a knife to make the model an Ausf C instead? 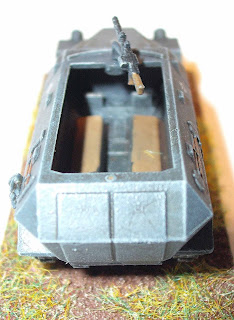 There are no crew figures or external stowage items for this vehicle as you'd get with PSC, so if you want the half-track populated you'll need to source some figures. I know you can buy a four man crew (including one figure manning the gun) from battlefront - I've bought them for my FoW model. Another source might be the FiB Kubel or Schwimwagen kits which have more seated figures than you can fit in the cabs.

In conclusion
The Pro's 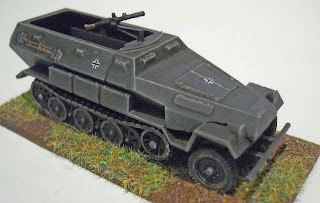 The Con's
Ok so there are a few picky "Con's" to consider? But what's not to like? The model only costs £2.75 and you can buy as many or as few as you want rather than being committed to buy in multiples of 5. At this price the models cost about the same as the 1/144 versions from Minifigs or Dragon so has to be excellent value for money. Thoroughly recommended.
Posted by TimsTanks at 20:34