Before I could start with some serious painting, I realised that spraying the halftracks would probably undo all the good work already spent on the internal details. Somehow I was going to have to mask the interior. 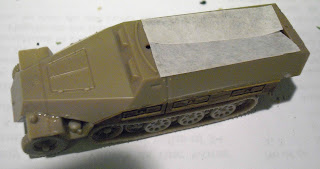 To do this, I cut some bog standard decorator's masking tape and attached it around the top of the hull. Simples... 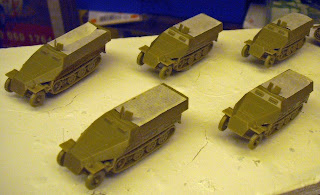 The first step was to undercoat them all in white primer to ensure single coat coverage with the top coat. 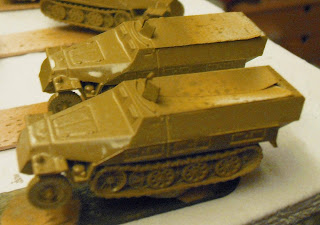 Each AFV was blutac'd to a lolly stick (to make them easier to hold), and then sprayed Vallejo Model Air Dark Yellow. 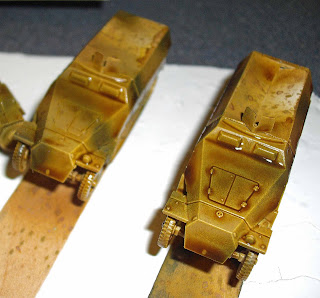 This was left to dry and then a diluted coat of Vallejo Sepia wash was oversprayed to emphasise the areas of shadow. 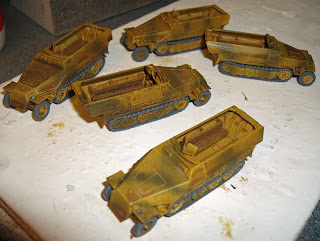 When dry the camouflage pattern was lightly oversprayed in Vallejo Model Air Panzer Green. That done the masking tape could be removed and the finishing touches added.
The tracks and tyres were painted Vallejo Dark Grey and then given a coat of Fleshtone and Black wash respectively. The Fleshtone does an excellent job of simulating rust!
The headlight lens was picked out in Sky Blue and the whole model lightly dry brushed with Vallejo Buff to pick out the many angular edges. 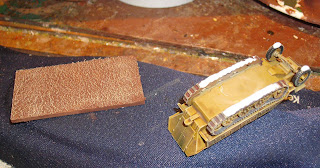 A 6 x 3cm mdf base from Warbases was prepared with a coat of Vallejo Grey Pumice, painted Earth Brown and dry brushed with buff and left to dry. Then the vehicle was glued to the base with PVA glue. 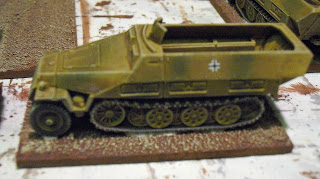 The final step was to add national markings decals on the hull sides. These were from my seemingly never ending stash of Dragon decals left over from their 1/144 range.

Well that's the vehicles finished.......just the crew to be done now.....or more correctly, five crews!
Posted by TimsTanks at 20:23