Next job was to prepare all those wonderful extras included on every sprue. With care it's possible to paint these items whilst they're still on the sprue to make it easier to handle them.
The gunner figure needs his right arm/MG42 gluing on, and I added a rifle to each of the unarmed figures. 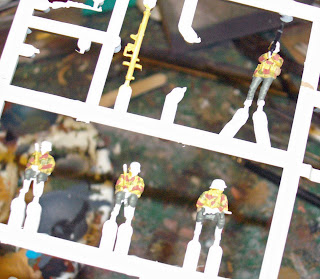 The figures were painted to match my FiB Panzer Grenadiers. Field grey trousers, smock base coated dark yellow with green and red brown splodges on top. 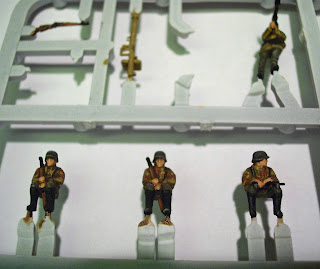 Helmets & mess tins dark grey and then the boots and equipment in black. Finally they were washed sepia and dry brushed buff.
The stowage received similar treatment. The jerrycans were painted dark yellow to match the vehicles. 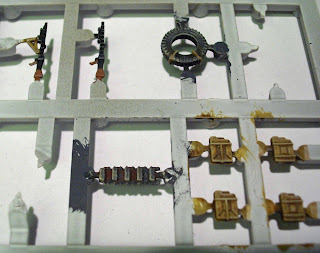 The packs were painted in greys and greens with straps in black and brown.

Once all were dry, they were removed from the sprues (carefully) and cleaned up. Where needed the paint was touched up before final assembly!

PSC have really excelled themselves this time. The sculpting of the figures and stowage is exquisite. The figures have character (even though two on every sprue are identical sculpts) and are well scaled and detailed. The stowage is fantastic and could be used to enhance any of the PSC range. And finally the weaponry - MG42's, Rifles and a Panzerschreck..........
Posted by TimsTanks at 20:41