More Thoughts on Rules for WW1 in 10mm

Ok so it looks like BKC II might be a good starting point for a set of fast play WW1 rules. But what does every good set of WW1 rules cover?
Well here's a summary of the specialist rules covered off in the various sets I own;-
Command & Control - limited comms. / fog of war / lack of initiative etc.
Gas / Chemical weapons
Air Support - very limited ground attack capability / arty. Spotting
Stosstruppen - elite infiltration tactics
Indirect MG barrages - and the use of MGs in defence
Trench Warfare - bunkers / dugouts / pillboxes / barbed wire
Artillery - pre-planned barrages ( Rolling, box, lifting, hurricane etc) / on/off table field guns / counter battery fire
Tactical Advances 1914-18 - just the shear change in warfare during this short period.
Mining
And last but by no means least.........
The early AFVs - armoured cars at first followed by the tanks later!
So there you are. All I need to do is bolt some rules for these onto BKC II and I'm good to go!
No pressure.....
By the way, here's the rest of my research material...... 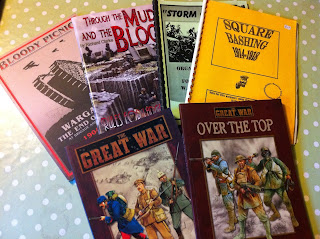 Sent from my iPad
Posted by TimsTanks at 19:44