Thoughts on Rules for WW1 in 10mm

I've made a start looking at what I'd need to do to BKC II to turn it into GreatWar Commander. I want to be able to fight Western Front actions, primarily between 1916-18. I will have British and German Armies so will be looking to simulate their weaponry and tactics.
My first exercise was to carry out a review of BKC II itself, just to make it clear in my mind that it was a good starting point. I thought it might be helpful to share my thoughts with others who might be thinking along the same lines.
Phases: includes scheduled fire - this fits in nicely with the preplanned bombardments so much in evidence during WW1.
Initiative: the tactical doctrine concept is ideal to allow for differentiation of troop quality/type.
Command Phase: the Warmaster based command system allows for an element of confusion and unexpected actions. This could be ideal to depict the lack of communication etc during an infantry attack?
Might be worth considering whether to make command bases anymore vulnerable than they would usually be to reflect the high attrition amongst front line officers?
Movement/Terrain: no need to alter. Should be applicable to WW1 as much as WW2 as is weather etc.
Firing: one thing I like about BKC and it's derivatives is the simplicity of the firing mechanisms. All hits being worked out the same - small arms/AFVs/Arty/Air Support - allowing hits to be combined against a target - perfect for simulating mutual support.
There are mechanisms already there for fortifications etc.
I like the way medium mortars (trench mortars?) are treated as direct fre weapons rather than mini artillery pieces. I think it would be good to come up with some special rules for indirect MG fire (beaten zones/corridors) and German antitank weapons.
Artillery Mechanisms: perfectly usable. Need to consider the use of fire plans, different types of barrage (creeping, box etc) and the issues with poor comms. at the time (field telephones with vulnerable cables etc) as well as on and off table artillery.
Air Support: could be modified to suit if I choose.
Close Assault: should be directly transferable.
Engineering: covers man pack flamethrowers. Wire, obstacles, demolition etc.
Fortifications, BUAs are all there as well.
End Phase: all would work well.
My first thoughts on what needs to be added/altered are;-
HQs - consider preplanning their movement and leaving the troops they command to try to see if they can keep up? Or perhaps, have the HQs on a per planned route, whilst their units have fixed orders (i.e. advance/hold/etc) and would keep on advancing despite whatever attrition they suffer until they either achieve there objective or break?
Storm troopers - elite forces stats. from CWC or FWC?
Chemical Weapons - stats from CWC?

You can see some of my research material here! I've got more sets of WW1 rules than I know what to do with. 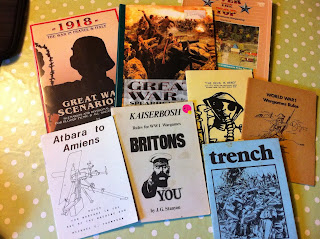 Sent from my iPad
Posted by TimsTanks at 20:56