One thing I'd always wanted was the option to buy the vehicles individually - I can even remember debating this with Will Townsend at Crusade 2011.

Therefore when the reinforcements range of single sprue bagged kits was announced, I was very pleased. 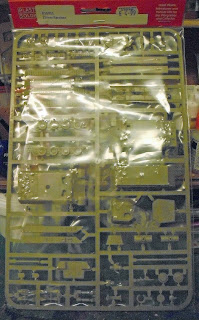 However am I the only person who thinks at £5 a shot I'm having the mickey taken out of me just a little bit?

Now currently the PSC Panther, the subject of this article, cost £17.95 for a box of five. Excellent value at £3.59 a piece! How come buying one on it's own in a plastic bag with no instructions warrants a £1.41 premium? See what I'm getting at?

Anyway, I didn't need 5 Panthers so there was only one thing for it and I bought a single one at £5 from the Hereford Model shop. 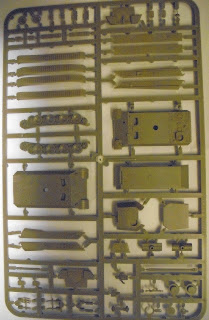 All the parts come on a single sprue of sand coloured hard polystyrene. As ever they are cleanly moulded and offer loads of alternatives. 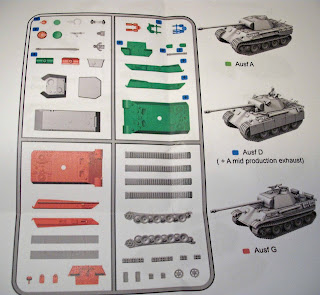 As stated above, there are no instructions with the kit. In many cases from PSC this would not be a big issue as the model is self-explanatory. However this model will build up as either the Ausf A, D or G and as a consequence includes two hulls and various other ancillary bits and pieces. 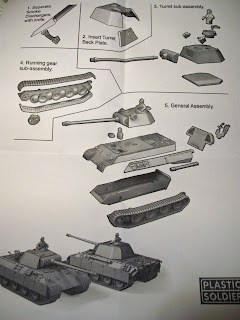 It is good then that all the PSC instruction sheets are available on their website to download and print off. I'd decided to build the Ausf G (the red bits in the diagram above) as I already have a Forged in Battle Panther Ausf G to go with it.
I built the model as a series of sub-assemblies as suggested on the instructions starting with the turret. 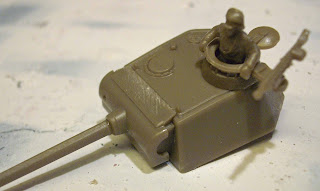 Be careful to follow the instructions and glue the rear plate in before the turret base. The main gun barrel had the muzzle brake drilled out with a 2mm bit twisted between finger and thumb.

The anti-aircraft MG34 had a little bit of flash to be cleaned off from around the butt and then glued into the mount that was part of the commander's cupola ring. I decided this was too exposed and delicate - unlikely to survive the rigours of a good wargame - so I cut it off. 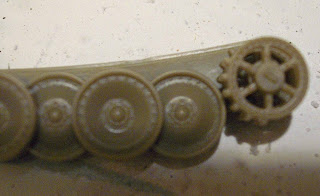 Next up were the track units. Starting with the drive sprockets glued in place so the outer face was clear of teeth.

Then add the upper track length. This is shaped to go around the rear idler and simulate a degree of sag running up to the drive sprocket. Just behind the drive sprocket you can see a quite prominent ejector pin mark, which is a shame.

Then stick the bottom track length in place. The inner edge of which should be flush with the rear of the wheels. 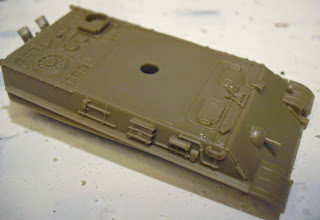 Now the hull top assembly. This needed two sides, two hull hatches, a rear plate, spare aerial container, exhausts and hull MG to be fitted in place. The sides incorporate nice pioneer tool detail. There is a half figure you can place in either the driver or MG gunner position if you wish as the hatches are separate and there's a void beneath where they fit.
The rear plate takes the combined exhaust assembly which also had the holes opened up with a drill bit to add to the reality.

This left me with four completed sub-assemblies and a hull floor. 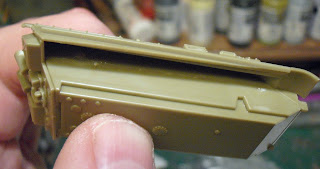 Next glue a track unit each side of the hull - you can't get this wrong they'll only fit one way round.

And that's it. Just drop on the turret and that's the Panther finished. 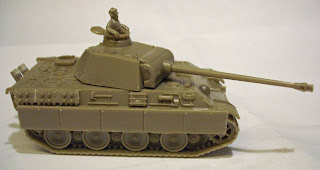 There are a few extras you can use if you wish to enhance / personalise your AFV. There are two jerrycans, tool boxes, track links and "Bazooka" plates. 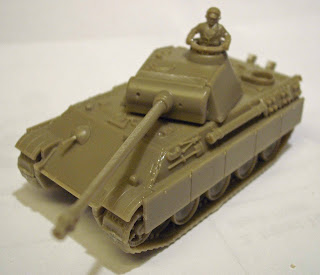 I chose just to add a few track links to the hull rears and the bazooka plates. The latter should make painting the finished vehicle a little simpler (less tracks) and also serve the purpose of hiding the ejector pin mark mentioned above. 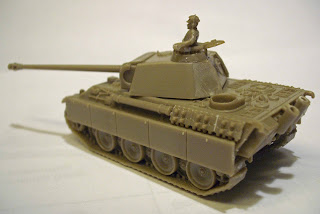 And there you are, a rather nice little rendition of the Panther Ausf G.

As ever, a pleasure to assemble, leading to what seems to be a robust little model (AA Mg aside!)...now to get this and all those other vehicles painted.