I bought myself the PSC T34's when I first saw them back in January 2011. I thought then (and still do) that the advent of 1/100 quick build models was one of the most exciting Wargaming innovations of recent years.

I enjoyed the build and made it my first ever build report. I also know from the blogger stats that this is my most visited page, so I guess an awful lot of you must feel the same.

I'm probably more of a modeller at heart than a wargamer, so building the PSC T34 seemed a breeze. However I've seen posts since that comment on the level of assembly with PSC kits and how long it takes to get them to the table.

Well I bought myself the Zvezda T34/76 the other day........now this is a totally different kettle of fish! 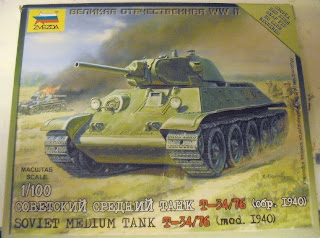 As ever, the kit is boxed with artwork on the front and some details and shots of an exploded + finished model on the back. 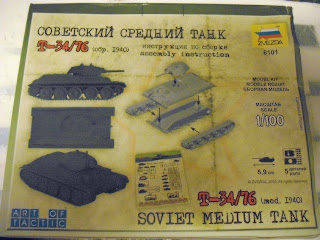 Inside there was a sheet of simple assembly instructions and a single sprue of slightly flexible plastic parts - 5 in total (less the Art of Tactic flag)! 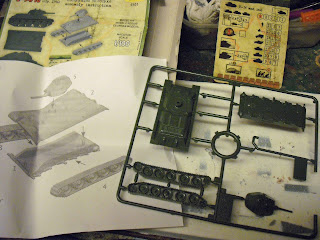 Now for the ultra-quick assembly brigade this bodes well when compared to the PSC version which contains a minimum of 15 parts to come up with the same vehicle. 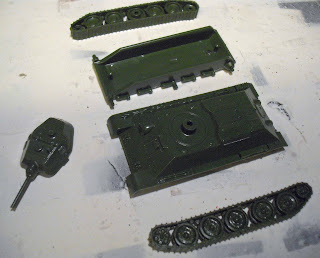 Cleaning the parts up requires a very sharp knife and a lot of care. You can't easily file or sand this material; cutting off the excess is the only answer. To be honest a write up of building this model would only insult your intelligence! It is simplicity itself and takes seconds. 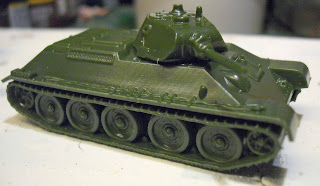 And, as you can see, the finished article is impressive.

This version is (to me anyway) the more common 1940 model, whereas the PSC model contains parts for the 1943 model as well as the later 85mm armed turret. Detail as ever is more than just adequate and I'm sure the kit will paint up well. So I'd better get on with it then...........