When I saw the new 15mm releases from Zvezda I was excited to find they'd taken the plunge and modelled the little German Sdkfz 222 Armoured Car.

I've loved the shape of this AFV ever since I first made the Tamiya 1/35th version in the 1970's. 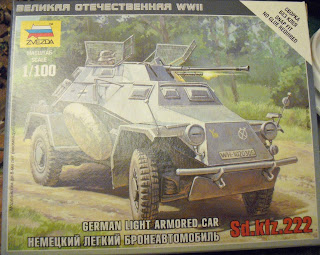 As ever the model comes packed in a cardboard carton which displays both evocative artwork and three views of the finished model. 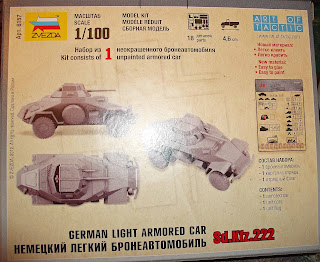 Inside the carton, the model is on two quite busy sprues of grey plastic. 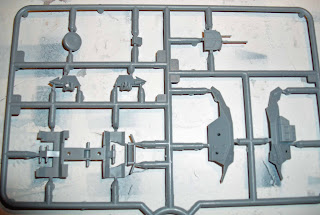 Moulded in a harder plastic than some of the the earlier kits in this range. 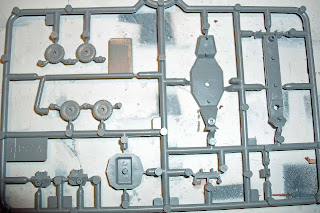 As you can see from the pics this is quite a "complex" model compared to some (see the T34 build I'll be covering next!) 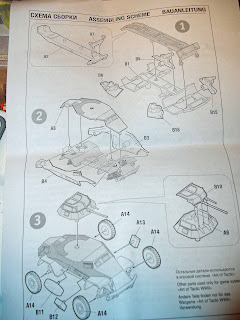 So it's a good job they've included a quite detailed assembly instruction leaflet! 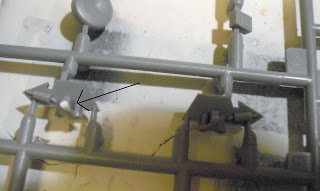 Close examination of the parts revealed that there was no flash, but one of the stub axles was broken off. This could easily happen when the carton was packed, and was solved by gluing a short length of plastic rod in it's place (see arrowed above)

The four inner wings with moulded on suspension and stub axle are quite fiddly to fit. There's no risk of getting them mixed up because they will only fit one corner. I've used ordinary polystyrene cement on the assembly even though you can get away with just snapping the kit together - I guess I just like the added security. One thing to watch out for though, put too much cement on one of the location pins and they wont push fully into their respective location holes!
Now I tried to fit the two sides first and then the hull top. This didn't work! I think next time I'll fit the hull top first and then the two sides after.
The sides are actually quite fiddly to fit as well. I found it easiest to locate the rear pins (furthest from the camera in the photo above) first, followed by the centre and finally the front pins.
To complete the hull all that remained was to fit the two small storage bins on the doors and the five wheels (one covered spare and four road wheels).
Finally all that's left is to assemble the turret. This is simply a case of gluing the combined 20mm /7.92mm gun mount (with moulded on anti-grenade netting) to the single piece turret. Simples!
And that's it. The turret is a secure fit and rotates nicely. The model looks small against over sized metal 15mm figures, but I'm sure its correctly to scale. I think it looks great.
If I had any criticisms, it would be that the model seems a little over complex for a "snap together" kit. Probably in the same way their Sdkfz 251 was a little fiddly too.

Don't get me wrong, it's not beyond anyone to assemble, just a little challenging for the very young (Or old for that matter).

When finished the parts aren't a perfect fit - there are gaps that you can see light through. I think that painting will overcome this...we shall see.