On opening my parcel from PSC I was very excited to see the amount of components with the game. I was slightly disappointed they hadn't lashed out on a bit of bubble wrap to protect the box top and extra scenario sheet from the artillery sprues - both are dented from being packed so tightly - but that's a minor point.
The printed card components are all really good quality as is the folding game board. This will make a good portable gaming surface for any wargames - green one side, brown the other.
The large number of 15mm figures all look lovely. I haven't tried to remove them from the sprues yet so I haven't had a chance to see if the British bayonets break as easily as they say that they do, on the web. 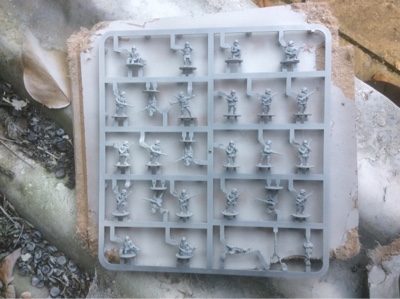 Looking at the sprues got me thinking that maybe the majority of painting could actually take place whilst the figures are still attached? 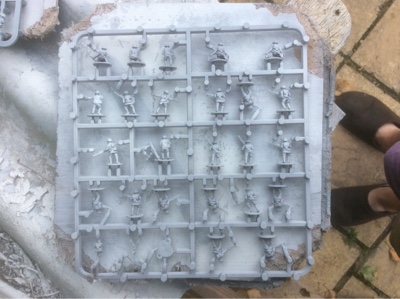 If this would work I think it would greatly speed things up and get them on the table ASAP. So I'm going to experiment with one of each sprue. 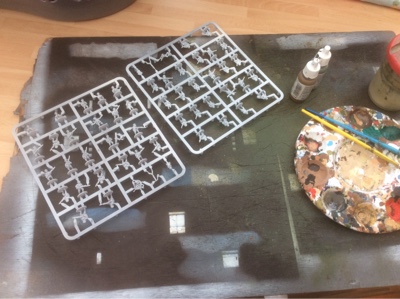 Firstly I primed them in white using GW Spray primer,  then using Vallejo Acrylic English Uniform and Field Grey slightly watered down and with a bigger than normal brush, I painted all the uniform areas taking about 5-6 minutes for both sprues. The detail on the figures is good and I had to dab the paint on around rifle slings and such like. 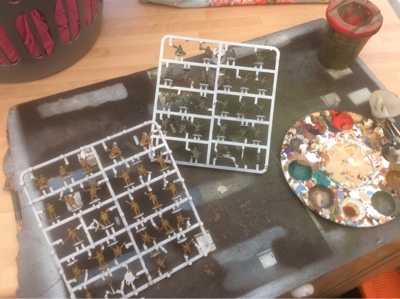 The way the figures are attached means that there will be either touching up of helmets, uniform or bayonets once they are cut off. Not too bad. The figure bases are attached to the sprue at the unseen underside so facilitate you painting the bases whilst on the sprue as well - a real bonus.
As they are primarily gaming pieces for this board game, I'm not going to texture the bases just paint them grass green. However they are really good figures and I suspect they will be forming the core of many a 15mm WW1 army over the coming months.
Much as I love the artillery bonus figures (£24 if I'd had to buy them) I can't quite see yet how you use them in the game? I've only skimmed through the rules once so may have missed something. If anyone can tell me please get in touch.
Finally I've just had a look at my bonus metal generals. All I can say is good sculpting.....poor casting. Half of the group suffer from the moulds having been out of alignment (one I thinking s so bad it's unread usable) the others have a fair bit of flash. Shame really, but again I'm not sure how you'd use them in the games anyway.
More to follow
Posted by TimsTanks at 11:11