Finally got around to trying out P&S in anger last night, using my 15mm ECW figures. I know it’s been out for ever, but I get distracted….OK?

Having loosely read them through, Two issues seemed odd to me.
1.       The splitting of infantry into separate musket and pike units
2.       The use of the “Hedgehog formation”.

Firstly, every ECW rules I’d ever encountered had combined infantry units (Pike & Shot together) and secondly, I’ve not read anywhere of the use of the “Hedgehog Formation” during the ECW and wondered how historically important it was? 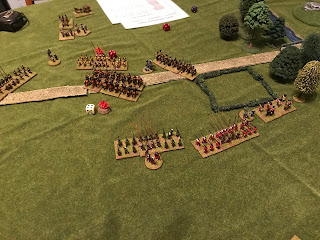 So to this end we adopted combined units as per those advised on the Wargames Design blog.

I see that the new “To Kill a King” P&S supplement has finally introduced this option too.

The idea of the game was to become familiar with the rules mechanisms rather than test the skills and tactics of the players! So we just went for a straight forward encounter game, with both armies facing one another. All units assumed to be “Normal” in size and 2 Battalia per army with artillery support. 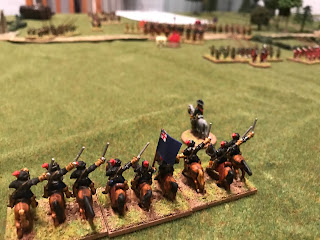 Early on my renowned dice rolling got me into a pickle with units failing to get off the starting blocks whilst others raced ahead breaking the line.

The main action took place in the centre where my semi-armoured Cuirassier pushed back my opponent’s infantry unit despite taking a casualty from the closing fire.

I decided not to follow up this with  a further charge and paid for it with an enemy counter-charge from their supporting cavalry, during their next move. 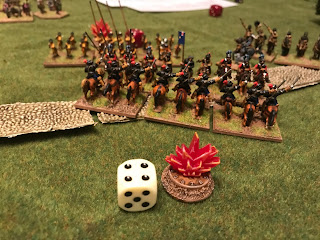 The demise of my Cuirassier started with them firstly having received a single casualty by fire from the pushed back infantry unit. As this was on a score of six, the Cuirassier became Disordered.

Then receiving a charge (even with delivering Closing Fire first) my unit failed to win the HTH and as they were Disordered, were destroyed. Harsh but probably fair……I should have followed things up. 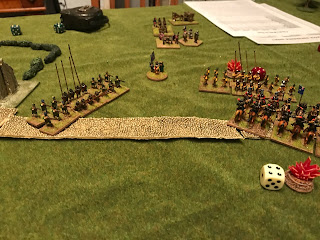 This leads me to one issue that confused us all evening. The score of a natural six leading to Disorder. If that hit is later cancelled out by a Morale Save, does the Disorder still stand???

All-in-all an enjoyable evening’s gaming. I think P&S’s mechanisms will be easily learnt as we play more and I think an exercise separating out those rules relevant only to the ECW would help there.