Another little sideline for me, 3 armed (and Armoured) Jeeps as use by the SAS in Europe 1944-45.

These are from Battlefront are are nice little models. 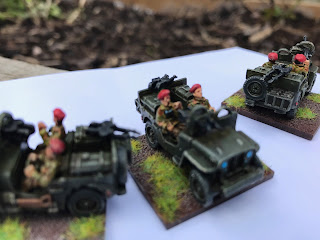 The basis of each model is a once piece resin casting of the jeep body. It incorporates the two rear mounted, self-sealing fuel tanks, extra fuel cans on the rear and a rear gun mount. 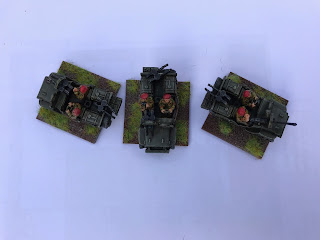 Then for each vehicle there are two crew figures wearing para smocks and berets. Together with a selection of weaponry to add - including single & twin Vickers K guns and .50 cal HMGs. The latter incorporate an armoured screen and there are armoured screens for the drivers too. 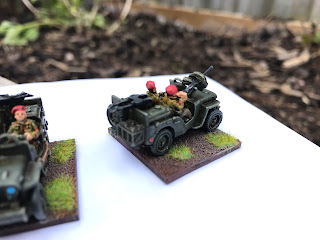 Assembly is straight forward enough and they are quick models to paint up. Not sure how I will use them in games as yet, but I'm sure they will come in for something.
Posted by TimsTanks at 11:01