As well as the historical hero figures that came with the Warlord set, I also bought myself the Holywood versions. These are great little caricatures of the stars of the 1964 film. 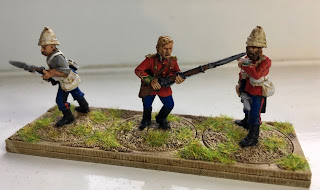 The Warlord plastic Brits need some assembly and I have to say I found them a little fiddly. Getting left & right arms to line up whilst still located correctly at the shoulder was quite a challenge.

The sprues each contain parts for 4 figures - two standing 7 two kneeling - so there's not much variety to be had between figures. There are parts for two to be aiming & firing their rifles, one at the ready and another loading. There's also an arm with sergeants stripes as an alternative to the loading arm. 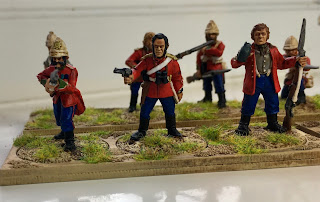 There's a wiggly bayonet - which I believe would have only been issued to sergeants and a variety of heads. Most wear the colonial sun helmet, but there's also a forage cap and a wide brimmed, "Boer" style hat.

I chose to mainly use the sun helmet, with just a couple of forage caps thrown in. I was unsure of the wide brimmed hat to be honest, so left them  well alone. 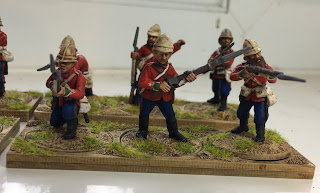 Due to the lack of variety I purchased a single sprue from the new Perry Colonial Infantry set, from good old Ebay.

The first four Warlord figures and the two sets of Empress Metals have been completed so far and really look the part. I've tried to resist trying to paint in too much detail, but there's so much there to be picked out, it's hard not to.