Zulu! - 28mm Rorke's Drift - Trying the Terrain with the Figures

To help keep that motivation going I decided to set up the terrain for the battle and try my newly finished figures for size.

I only have the basic set, so the actual perimeter is somewhat curtailed. I'm thinking I may need to treat myself to another pack of Mealie Bag barricades and a Mealie Bag Redoubt, but the £30 price tag is holding me back!

This contains some really good ideas to consider. One of which is the concept of fighting the battle with far fewer figures than you might think you'd need. 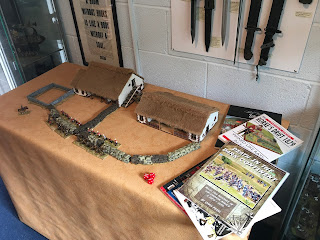 This is based on the premise that the Zulus carried out a series of probing attacks at different points around the defence perimeter, throughout the 12 hours of fighting.

This invites the possibility of splitting the perimeter into zones and selecting them randomly for attack, through the game. This way you can keep recycling your Zulu forces.

The author also suggests just representing the area of the defences on the table to avoid the battlefield appearing devoid of Zulu Impis! 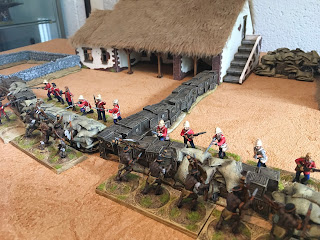 I have the Black Powder supplement, Zulu, which covers the battle with a modification to the main rules.

I picked up Osprey's The Men Who Would Be Kings, at a recent Firestorm Games Bring-&-Buy for £5. These I see were used by the Beasts of War for their refight. 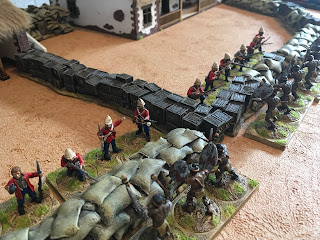 And, as previously mentioned, I have a copy of Death in the Dark Continent, too.

I think the answer is to try each out and find which combat mechanisms I like the most and then use those with the Campaign book ideas to create a game.