I was sifting through my lead mountain a few weeks ago and came across several Peter Pig packs of figures I’d bought some 4-5 years ago.

These were a mix of WW2 Japanese infantry and USMC inspired by having watched the HBO Mini-series “The Pacific”. 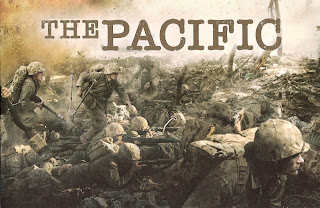 Re-discovering these figures prompted me to re-watch the programmes and together this got me thinking about how I could create a wargame based in this theatre of operations. The obvious choice of rules (for me anyway) was to use Arty Conliffe’s Crossfire to refight a company level battle. 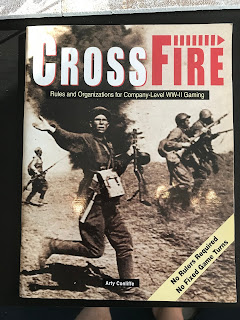 As I’d just built two mdf landing craft from Original Laser Designs, I wanted the scenario to be an opposed beach landing. So with that sliver of a plan I set out to decide what had to be done.

I had an idea that this game would lend itself to a demonstration/participation game for use at either club level or a gaming show. Therefore I planned for it to be both compact and portable.

I had four ready cut sheets of 6mm mdf, each 30cm square, left over from my HOTT project a few years ago so I decided that this would form the beach and interior jungle area of the game. I’ve played Crossfire on several occasions over quite small boards and found it still to work fine.

The actual beach area at first caused me some concern….but then I hit on the idea of printing out some beach graphics I found on-line. I printed them to a size that allowed them to be cropped to 30cm x 25cm. and then laminated them with gloss finish pockets. These were then stuck onto 5mm Foamex board (a scrap sign) and the sandy beach area sprayed with matt varnish. Job done. 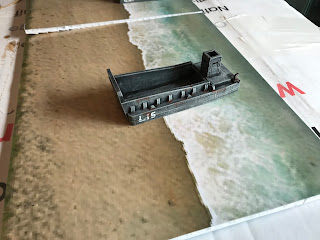 I then turned my attention to the four mdf sheets. Firstly I varnished them on both the upper and lower surfaces to avoid warping.

Then I devised the shapes of sand dunes/banks I'd incorporate using paper templates. The design I came up with allows a little variation with swapping the tiles around. 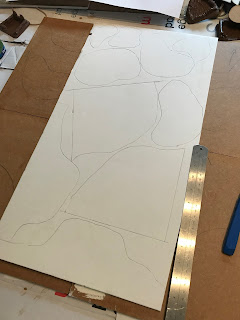 The sand dunes/banks were added using 5mm Foamex board. 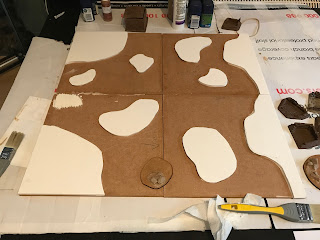 These were blended to the main board with decorators caulk. 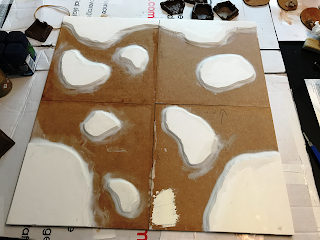 Then everything was coated in PVA and sand scattered over it. To seal the sand in place another coat of varnish (Oak stain colour) was given to the upper surfaces of the four boards. 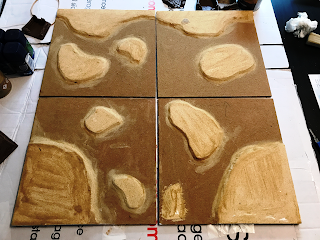 Finally when all was dry, the upper surfaces were dry brushed with emulsion paint from a suitable sand coloured matchpot. This was then left to dry while I tackled the other items. 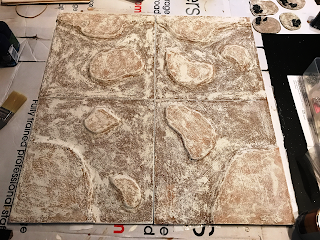 I was going to scratch build some defensive positions and get a Sarissa mdf jungle hut, but fate intervened when at Colours in September. I found on the Products for Wargamers stall a box of ex-Mainly Military resin pieces being sold off for a song. I came away with 5 defence positions and a jungle hut for less than £6! 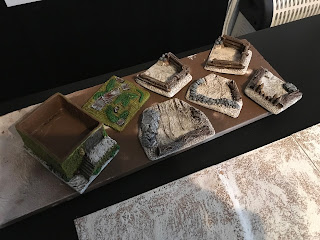 These were simply painted to match the base boards. 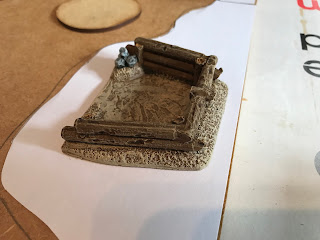 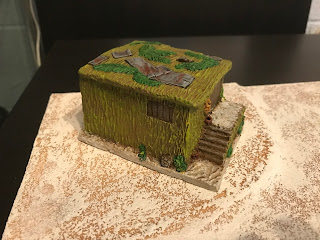 The foliage was the next item on the list. I firstly bought 25 palm trees from China via ebay for £2.50, which arrived surprisingly quickly! Then I found a pack of Games Workshop jungle trees in my pile of things to do – this gave me four more (large) palm trees.Then whilst at Colours I found some nice jungle plants that cost me a further £5. 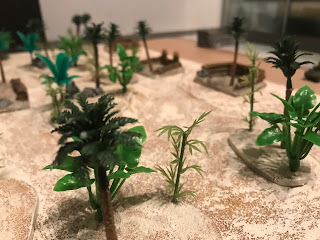 These were all mounted on mdf terrain bases (random shaped) from Products for Wargamers. With sand, and some resin boulders (from The Square) added they look the part and form the areas of cover for the figures to move around the table in a Crossfire game. 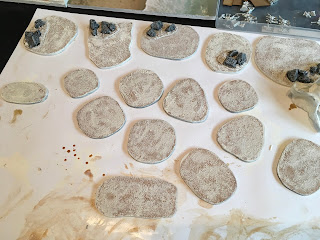 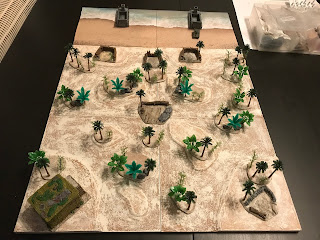 With the base board finished, it was time to paint the figures. 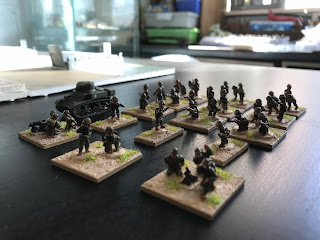 To boost the Peter Pig miniatures I bought the Battlefront USMC platoon. These at first looked to be very rough and ready. I guess they were quite old sculpts as the castings had a lot of flash and mould lines to be cleaned up.

Eventually I was left with sufficient  figures to form two rifle companies with command figures. To complete the organisation, I had bought support weapons from Peter Pig so had .30 MMGs, Bazooka teams and 60mm Mortars to add to these as well as a Zvezda M3 Stuart. 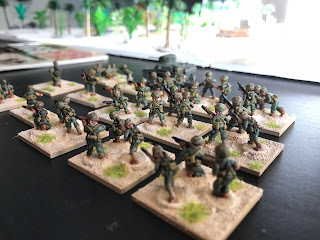 The Japanese figures were all Peter Pig. The quality of which is excellent. Little to clean-up and very characterful sculpts that make it easy for you to paint them up. 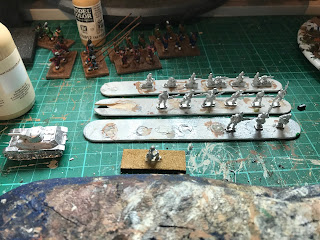 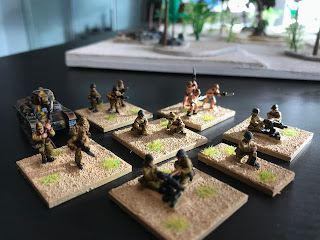 The Battlefront figures are actually 18mm not 15mm,  so don’t mix well on the same bases as the PP figures, but once painted proved to actually be very well detailed with a good mixture of weapons etc. 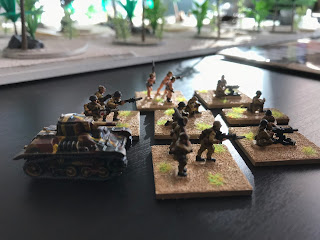 I’ve ended up with more figures than I really need (I’ll use them on larger games using my 6x4 desert mat) as I only need one company of USMC with some support and a platoon of Japanese with 2xMMG support for this scenario. 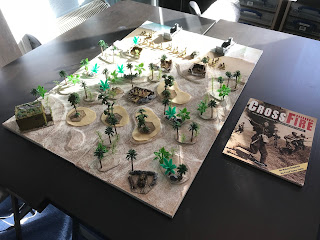 Now it’s all completed the terrain fits into one Really Useful Box (bottom one in the picture) and the figures into another. All very easily transported. Now all I need is to try out the scenario…..anyone fancy a game? 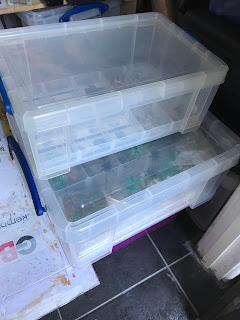