As opposition to my Soviets I treated myself to a platoon of British mechanised infantry and a Milan ATGW platoon.

These are cast white metal figures that considering they are quite newly released, take a little bit of cleaning up before you can paint them. 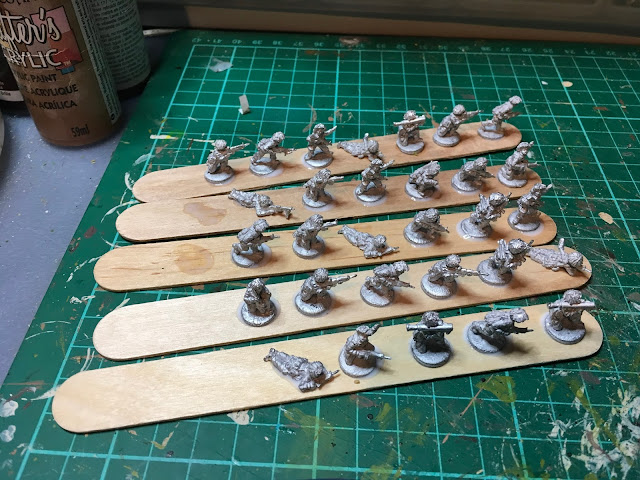 Once that was done I attached the figures to lolly sticks (from Hobbycraft) with PVA glue and allowed to dry overnight.

They were then spray primed with Army Painter Matt white primer. 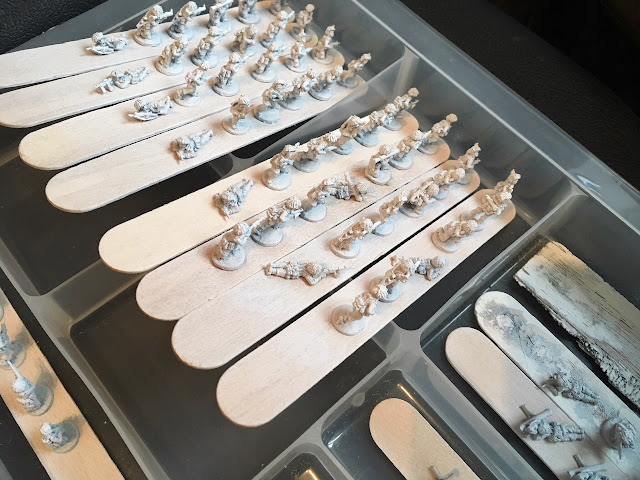 At this point my technique for painting British DPM material differs from that described in the Iron Maiden supplement. Closer examination of the DPM material will reveal that the base colour is in fact a sandy colour (from Buff through to Dark Yellow dependent on the amount of laundering) not green as described. The green, red brown & black pattern is printed over this base colour. 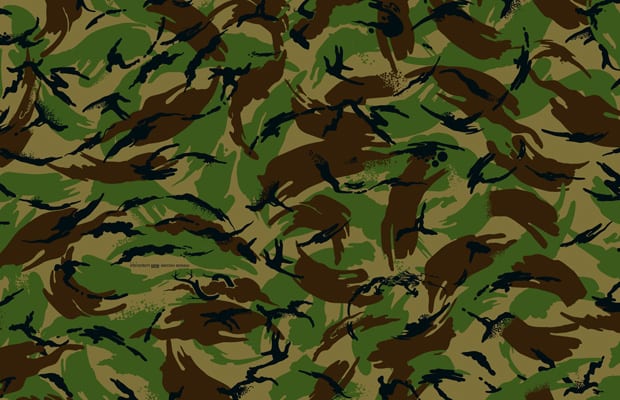 I guess the ratio of colours in DPM was somewhere in the order of;-


Therefore my base coat was Vallejo Panzer Yellow – in this case the ModelAir version applied with my airbrush. 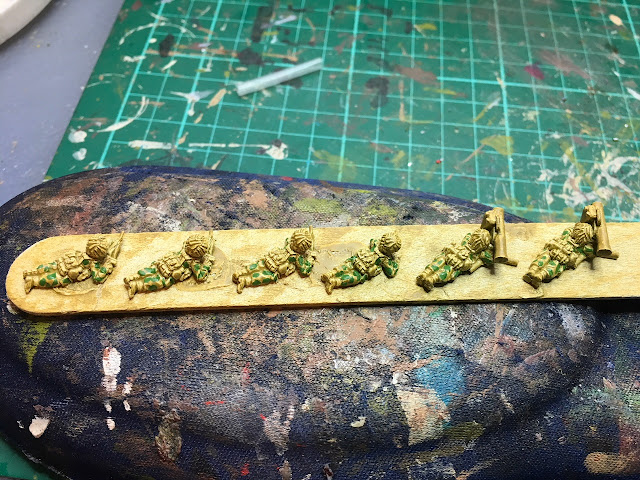 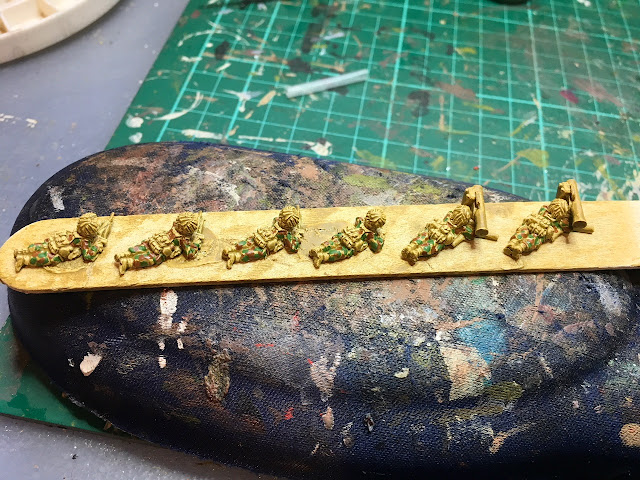 After this the ’58 Pattern Webbing was painted Vallejo Grey Green. When new the webbing is a dark green (Almost Vallejo Russian Green) colour. But it rapidly fades in use to a greeny grey shade.

I also painted the rifle sling at the same time (these could be any colour from sand through to dark green dependent on age and material of manufacture). The cloth puttees were then painted Vallejo Khaki. 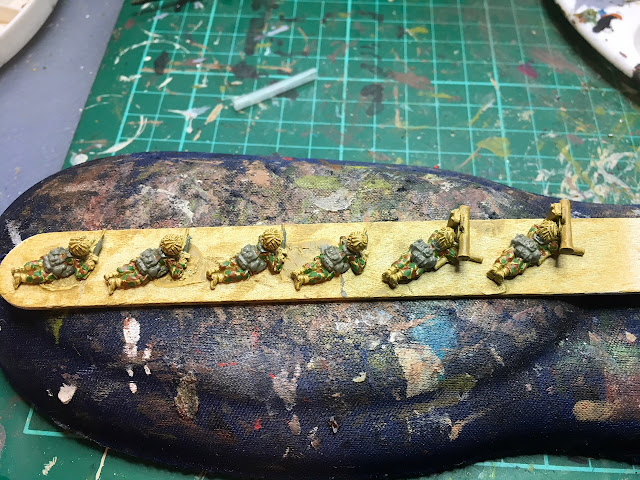 The figures were then given an all over coat of Vallejo Sepia Wash. 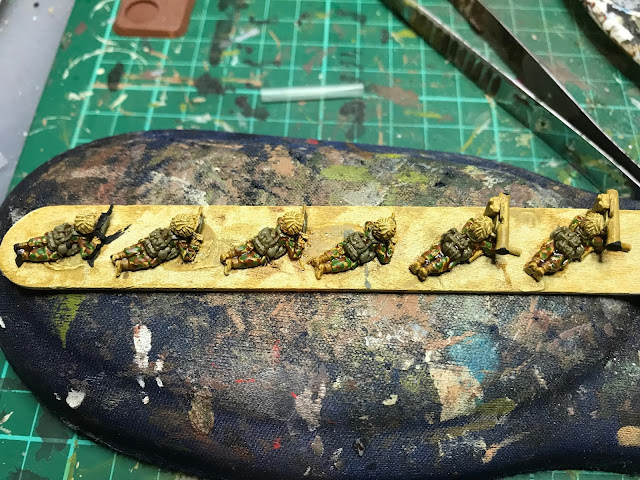 Once dry, the boots and SLRs were picked out in black together with the bottle top (which pokes out of what I'm assuming is a ’44 pattern pouch? NB: These were non-standard but popular items as they gave quicker access to the bottle than the '58 pattern item).

The black element of the DPM cloth was added at this stage in the form of small black lines here and there. Also the flesh areas were painted and given a flesh wash to add depth. You would be hard pressed to find a British infantryman of this area without his face and hands smeared in camouflage cream. However I chose not to depict this as it makes it look like you've done a bad paint job and forgotten to touch up afterwards! 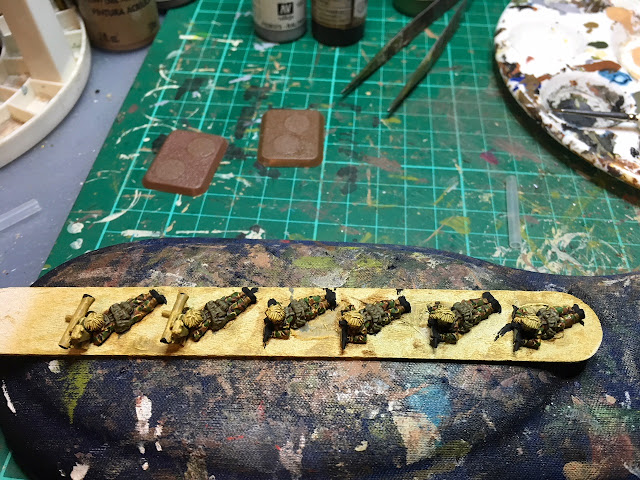 NB: At this time in history it was not unheard of to find SLRs that still sported the original wooden furniture, or indeed a mixture of wooden stock. pistol grip and black nylon hand-guard.

The helmets as depicted are covered firstly in hessian (cut from a sandbag), then scrim netting and finally strips of different coloured hessian and scrim attached to break up the outline. I painted them Vallejo Military Green and applied a Vallejo Sepia Wash, before dry brushing Vallejo Iraqi Sand and picking out individual strips with Vallejo Khaki. 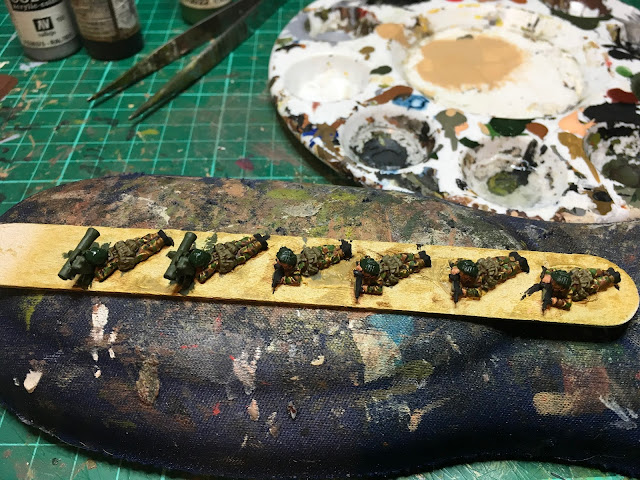 The Milan firing posts were painted Vallejo Russian Green and then weathered.
The bases came with blanking discs for use with the prone figures, which was nice! These were simply left as they came, painted with cheap acrylics and dry brushed with a lighter colour, before super gluing the figures in place. To get a good bond I score the base surface with a scaplel first. 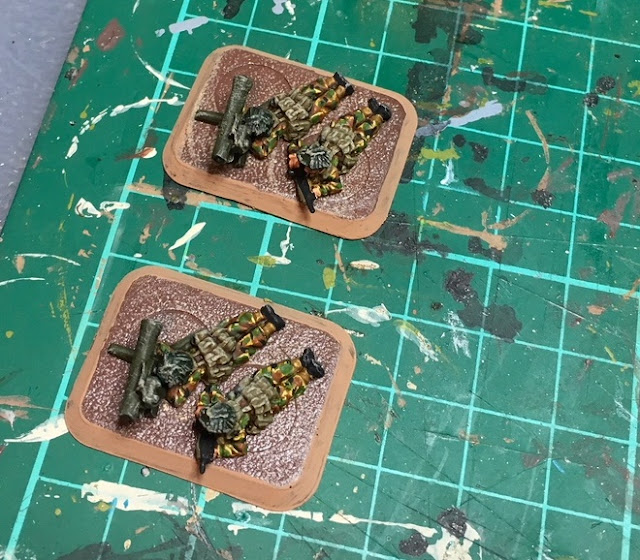 Nice additions to the collection and not badly priced – in the case of the Milan Platoon £7.20 (at Firestorm) for 20 figures + Bases. Which is comparable in cost to say Peter Pig figures.

Just a coat of varnish to apply and some flock and they'll be finished.
Posted by TimsTanks at 09:35