On the first full day we took a tour around the scenes of 6th Airborne Division's actions post D-Day. This was of particular interest as my Great Uncle died during this advance in the summer of 1944.

This is his story. (Source:-https://paradata.org.uk/people/david-mckirdy)

Sergeant David McKirdy, born in Glasgow, was the son of David Vincent and Jean McKirdy. He later moved to Bridlington, Yorkshire and married Emily (My Grannie’s Sister).
He enlisted into the Green Howards, a Yorkshire based regiment. He was taken as a Prisoner of War while fighting in North Africa with the Green Howards and held in a POW camp in Italy, escaping during the Italian armistice. He was awarded a Mention in Despatches for his actions and the award appeared in the London Gazette on 27 April 1944.
Shortly after repatriation, he volunteered for airborne forces and attended Parachute Training Course 109 which ran at RAF Ringway from 27 March to 7 April 1944. This was a standard course of 8 descents including two descents from a balloon, 3 descents from a Whitley, one night descent from a balloon and 2 descents from a Dakota (including one with kitbag). The course instructor notes record that David was an “above average parachutist and efficient NCO”.

On qualifying as a military parachutist he was initially posted to the Airborne Forces Holding Unit and then transferred to the 13th (Lancashire) Parachute Battalion.

David jumped with the battalion, forming part of 5th Parachute Brigade, onto Drop Zone N, north of Ranville near Caen for the Normandy landings on 6th June 1944. 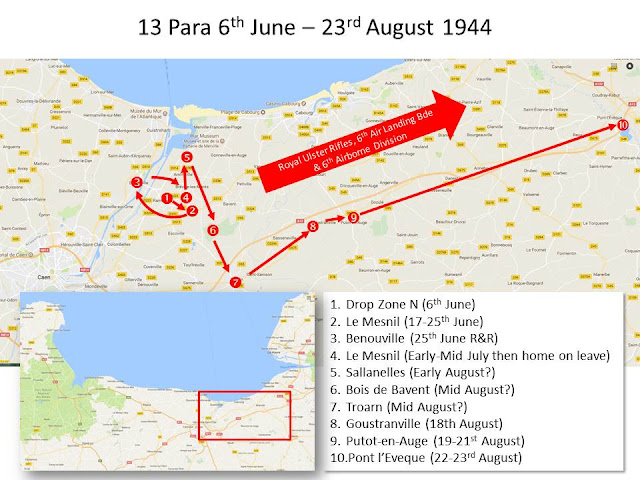 All tasks allotted to the battalion were completed according to schedule and the battalion established defensive positions around Ranville. There was considerable shelling of the battalion positions and a major attack against the battalion on 10 June was repelled with heavy losses to the enemy. On 17 June, the battalion moved forward to Le Mesnil to relieve 1st Canadian Parachute Battalion, and from there on 25 June, in to a rest area near Benouville bridges for a much-needed rest.

In July, David carried out a long spell of duty, with the battalion, in the line at Le Mesnil and the rest of the month was spent at rest or training areas.
In the first half of August, David moved with the battalion to attack the German positions at Salanelles and later in the month (18-19 August) advanced to secure the village of Putot-en-Auge.
As a result of this assault alone, 70 men from the battalion were killed wounded or missing. Many of whom are now buried in the village cemetery.
The battalion was then ordered to take Pont L’Eveque, which was stubbornly defended by the Germans. As a result of two days of fierce fighting much of the town centre was set on fire and destroyed. It was during the assault to capture Pont L’Eveque that David McKirdy was killed. 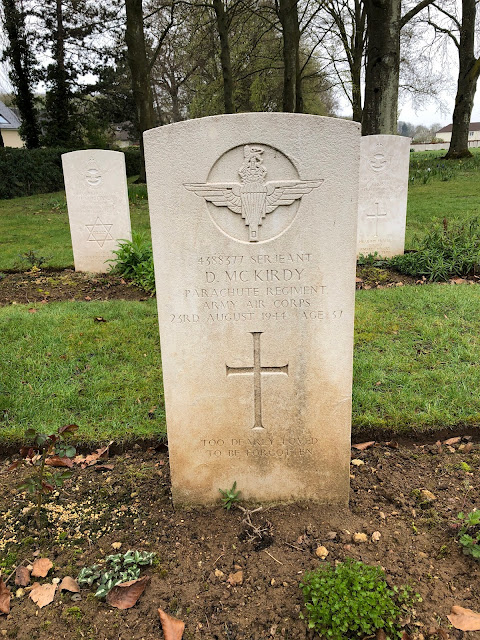