What a Tanker – First Game AAR (Part One)

I’d laid out the terrain on my Deepcut Studio’s 4’x3’ mat. I’d pretty well used all the suitable terrain pieces I have to try and give a “realistic” Normandy feel to the table.

I’d decided to keep things simple for my first solo game, and had chosen the Sherman Firefly & Cromwell for the Allies and a Tiger I & Panther for the Axis sides. Now I know there is an in balance in points here (something like 28pts. vs. 40pts. in favour of the Germans!) but it was just an exercise to become familiar with the mechanics.

The Allies were playing left to right and obviously the Germans in the other direction. As I’m using ‘N’ scale (1/150) AFVs I opted to go with centimetres in place of inches – more of which later.

Moves One & Two. The Firefly advanced over the slight rise and headed for the hedgerow cover beyond. The Cromwell advanced alongside the Firefly. Finally, the Panther and Tiger moved forwards onto the road, very cautiously.

The dice rolls at this point had really only allowed for movement or re-loading (even with Wild Dice!) so when the Cromwell managed a couple of acquisition dice I checked to see what could be seen.

Using my newly purchased (J) laser pointer I could easily check what cover appeared along the line of sight. This showed there were 4 minor obstacles along the way so no way could I spot my intended target (L). 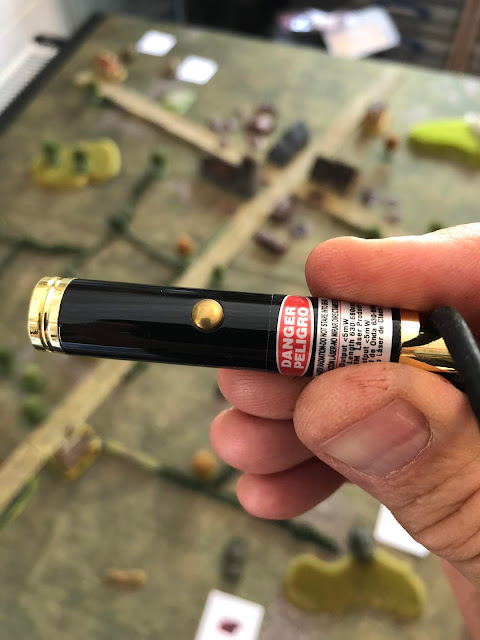 Move Three. Saw the Firefly move forwards again, only a short distance (it’s rated slow in the rules so maximum 2 move dice). However it rolled 3 acquisition dice which allowed it to acquire the Tiger.
The Cromwell continued to advance using the hedge for cover and the Tiger took up position against the low wall ready to try for a shot. 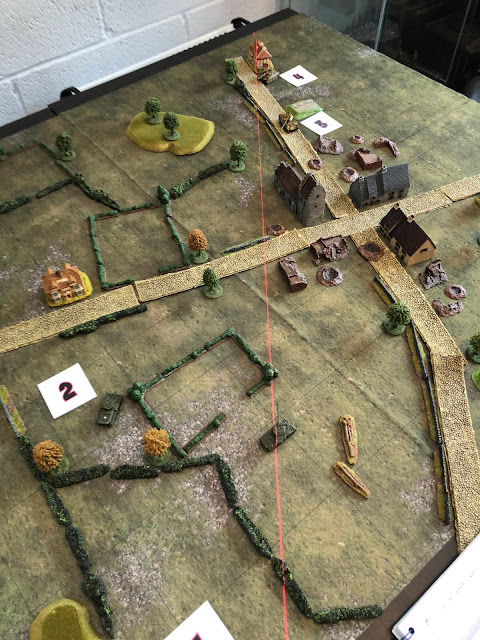 The Panther (fast) seized the opportunity to “race” to the crossroads where shots against the Cromwell and/or Firefly would be a distinct possibility next move.


Then I had to stop as dinner was ready!

Email ThisBlogThis!Share to TwitterShare to FacebookShare to Pinterest
Labels: 3D Printing, What a Tanker