Yesterday I made (my now annual) pilgrimage to Colours at Newbury Race Course. A very similar format to last year (and previous years I believe) with most of the big traders occupying the very same spot as they did on previous occasions. 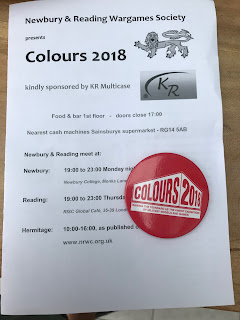 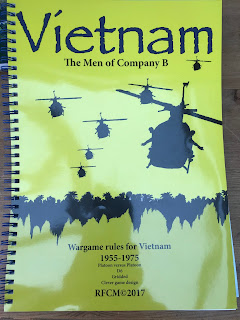 I wasn't really searching for something new this year, so that controlled my spending somewhat, but I did weaken and buy Men of Company B from Martin Goddard  (Peter Pig) after he did such an eloquent sales job on me! I have already US & VC armies in 10mm, based for BKCII, so with my 4" square Deep Cut mat I should be able to get straight into this. 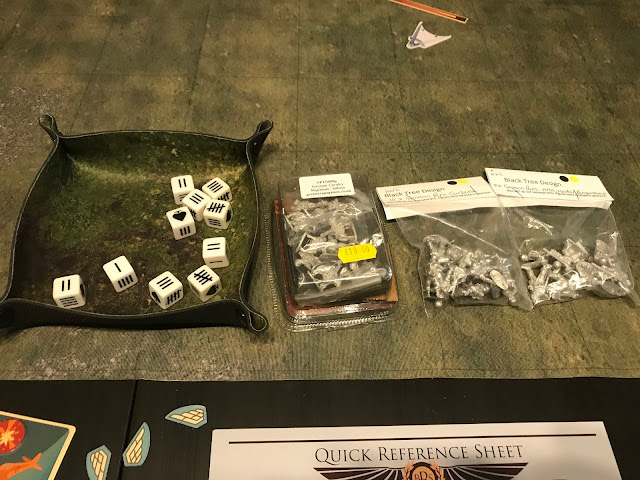 Deep Cut Mats were present at the show and they were doing a very brisk trade with their mousemat material battlemats - very nice too. I treated myself to one of their little dice mat thingies (£3) - made from off-cut material - just what I always needed! 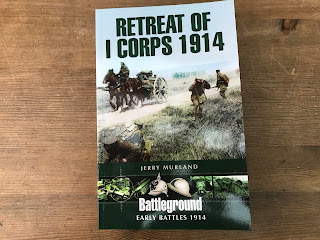 I had a very pleasant chat with Stuart McCorquodale from Great Escape Games about their 1914 rules. Sadly he's no plans to make a later war version. I think it's time I had a go at some house rules myself. To this end I've bought myself Iron Cross to see how they handle the AFVs, for inspiration. I bought myself a pack of WW1 12mm Cavalry while I was there, as this is the only troop type I'm short of for the game. Nice figures, a pack including the mounted elements, dismounted elements, MG Gunner and mdf bases for £10.

As a useful source for 1914 battle scenarios, I purchased the Battleground Europe book on I Corps' Retreat from Mons. Excellently written and full of sketch maps showing troop positions etc. Perfect research material.

Minibits/Pendraken were a one stop shop for mdf bases, dice frames and dice for my PSC Great War French army, a heavily discounted Warlord Hetzer (£12) also fell into my shopping bag  and finally I bought 20 or so Black Tree Design Fallschirmjager in 28mm, that were being sold at a very fair price of £8 for 10 figures.

The bring and buy was a waste of time for me. The prices being asked were hardly in the "bargain" region....I saw one army priced up at £300! Though there appeared to be a lot of items for sale and lots of people were looking if not actually buying.

The demo/participation games were upstairs on the 2nd floor and I thought there seemed to be more on offer this year. There were several "Cold War gone hot" type games, which was interesting considering my first moves into wargaming all those years ago was doing the very same!

Most games were visually stunning, but many suffered the usual fate of not progressing fast enough for the viewer to see what was happening together with a reluctance from those taking part to engage with those people who had stopped by to watch.

Those that succeeded had a dedicated, outgoing games master who actively sought to communicate what was going on. All groups should take a look at themselves and try to emulate these individuals. Bravo to those that did...

Below are some pictures of what was there. I'll let them do most of the talking. Where I can remember I've credited the presenters. Where I've got it wrong or have forgotten I can only apologise.

So there you go. Not every game by any stretch, I apologise for those I missed, but hopefully it'll give you a flavour of what was on offer.

I had a good 4 hours of entertainment so cannot moan. I'm not certain, but I think the lighting may have improved from previous years, I certainly didn't seem to have as much difficulty examining stuff. Food and drink were still outrageously dear for a peasant like me, but there's a Tesco and Greggs not far away, and it was a lovely day to sit outside with a packed lunch.