Finally it has arrived. PSC are really making a name for themselves with late delivery (originally due for delivery in June 2018) on Kickstarter projects!

Having so far bought the original game (on Kickstarter) and the first expansion - Tanks (again on Kickstarter) I felt obliged to back the latest offering too. 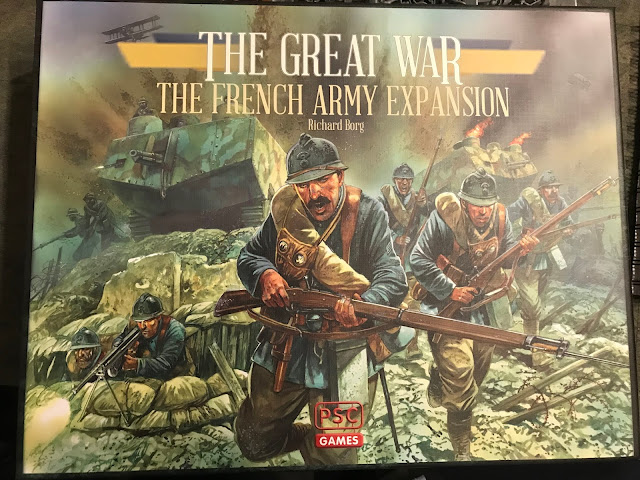 I must say the production values are well up to the standard of the previous too, though, if I'm honest, without the attractive stretch target additions, I'm not sure it's particularly good value for money at £45? 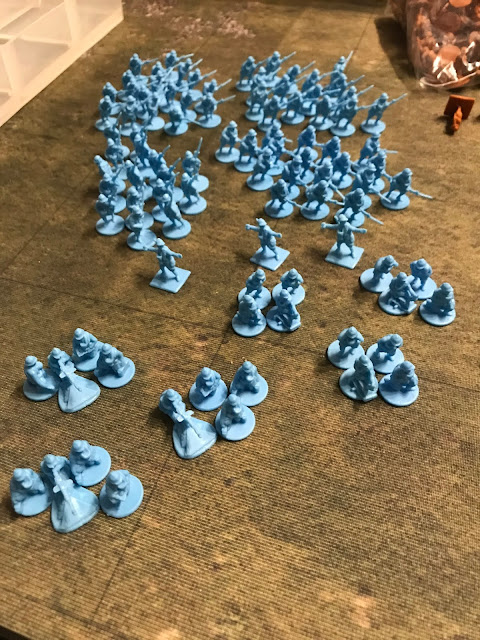 In the attractive box was one 15mm French army pre-cut from the sprues, in a new softer compound plastic. In total there should be 48 infantry, 3 MG teams, 3 Mortar teams, 3 Grenadiers  and a further 14 "Special troops" - a new feature for the rules. In fact I had 68 infantry figures so cannot moan...
In addition there were 18 "Special Troop" figures to add to each of my existing British & German armies from the original game.
The rule book includes new rules for French troops, their tanks (which, whilst offered as part of the Kickstarter, I didn't purchase as I already have some perfectly good Battlefront examples) and how to use the new Special Troop types in games. Also there were 20 or so new scenarios which include several for the fighting around Verdun.
Two quick reference sheets were included as well covering the new troop types & new terrain hexes.
Finally there were three sheets of (high quality) card terrain hexes to add to those I already have from the first two boxed sets.
The stretch goals rewards were decals for tank nicknames, an additional set of battle dice, more scenarios (on a loose sheet) a Rather small tank data card & French victory tokens (in card).
But best of all were two complete "replacement" armies in the new plastic (already cut from the sprues) including the 18 "Special Troop" figures for each army - British & German - these will retail post-kickstarter for £19.50.
This I think was brought about by the unhappiness that dyed in the wool board-gamers felt having to cut the original (hard plastic) figures from their moulding sprues!
Whilst I admit, it was a challenge not to damage the British infantry's bayonets whilst doing this, it wasn't all bad. I'm more than happy with my original figures so I don't really need these for the game itself.
So I'm currently unsure what to do with these - I guess they could make a good start towards a couple of Square Bashing armies?