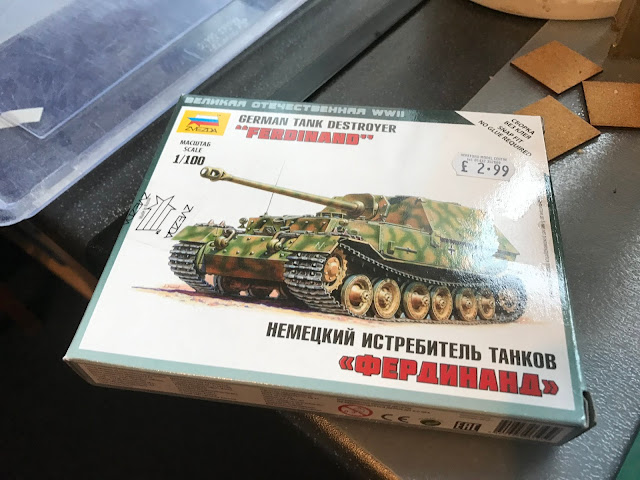 I bought these two (and a few others besides) early in 2018 with a view to building them up to review and add to my collection. I started this piece of work in May, but then forgot about them until last Sunday when I found them whilst was looking for something else! 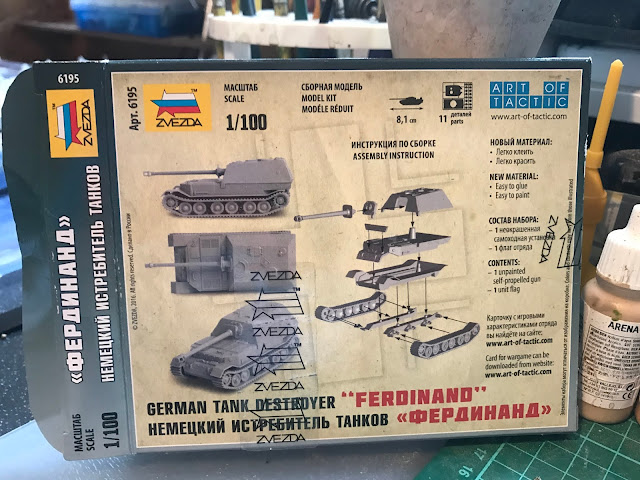 As ever the box art gives you an overview of assembly, which looked to be straight forward enough. 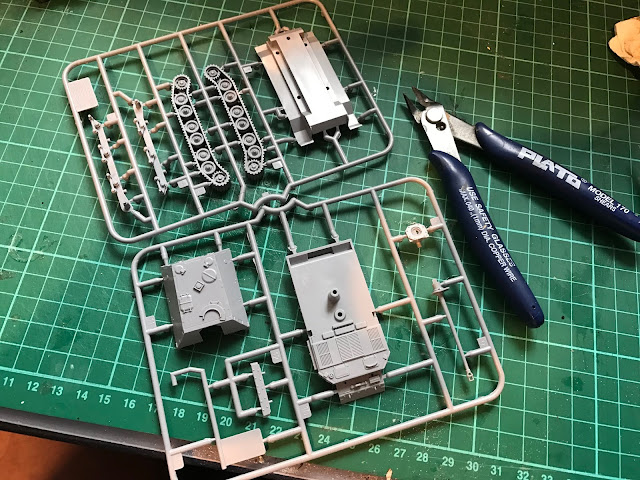 The parts come on two sprues moulded in a hard grey plastic. Parts are easily clipped from the sprues though (as ever) it is hard to do so without leaving tell-tale marks on the track surfaces. 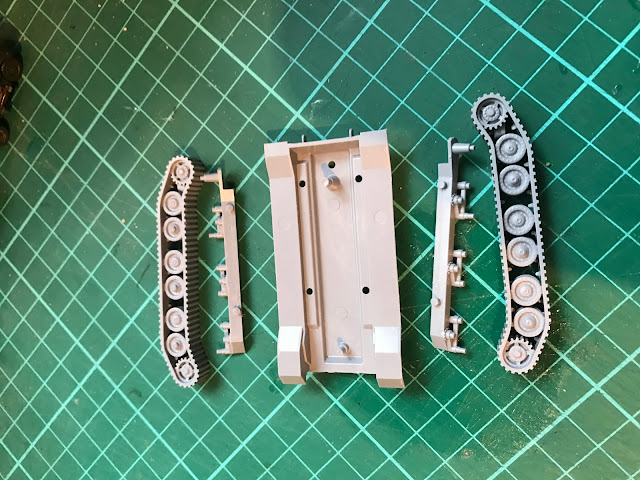 These five parts are required to build up the chassis. Beware there are right and left hand track units....check before you glue! 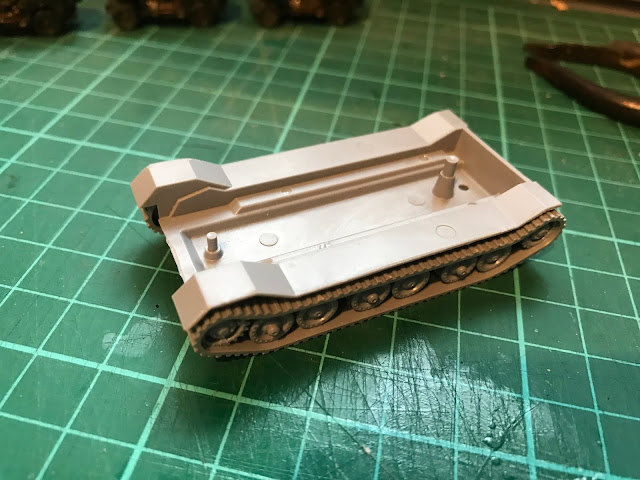 The chassis once it was assembled. 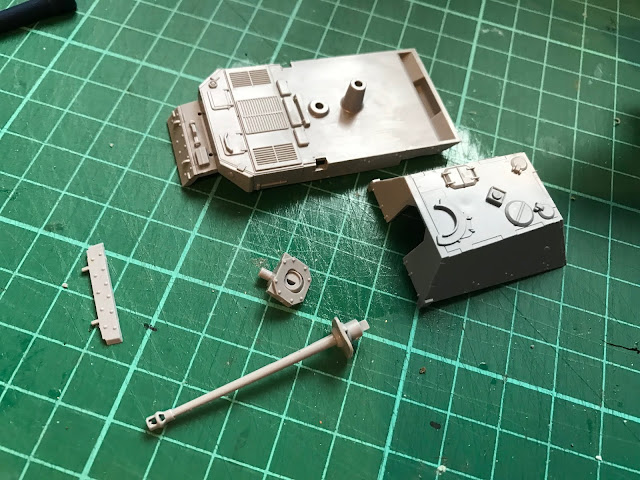 Next stage is to assemble the fighting compartment and attach this to the upper hull. There is a separate front armoured plate to fit with locator pins so you get it the correct way up. The fighting compartment has some nice detail including the interlocking armour joints at each corner of the superstructure. 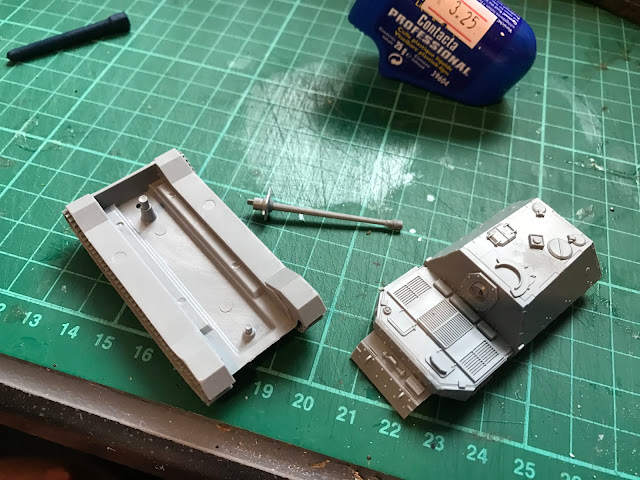 Finally attach the completed upper hull and fighting compartment to the chassis and attach the 88mm gun/mantlet and the model is finished. 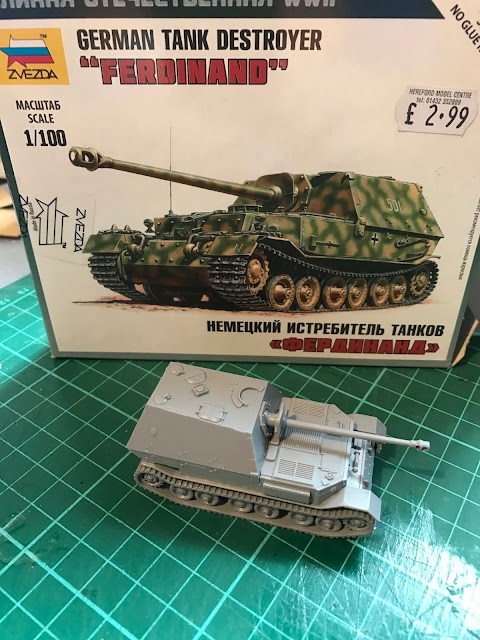 Very quick to assemble and a lovely little model of an early (pre-bow machine gun) Ferdinand. I guess this would be best suited to Kursk era battles, though the MG and a STUG III type cuploa would be easy enough to add for later battles (i.e. Italy) turning it into an Elefant! 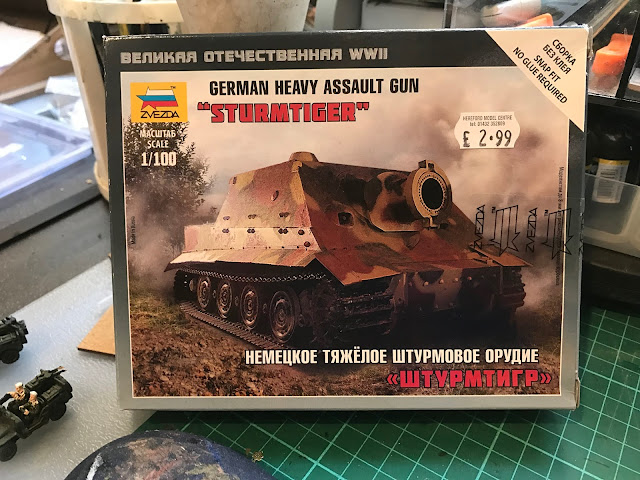 The other model was the Sturmtiger Heavy Assault Mortar/Rocket Launcher. 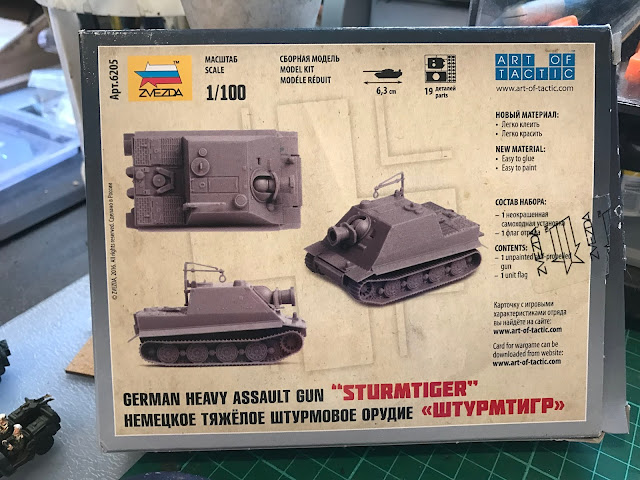 This time the box artwork just showed the finished tank as the assembly instructions were on a printed sheet inside the box. 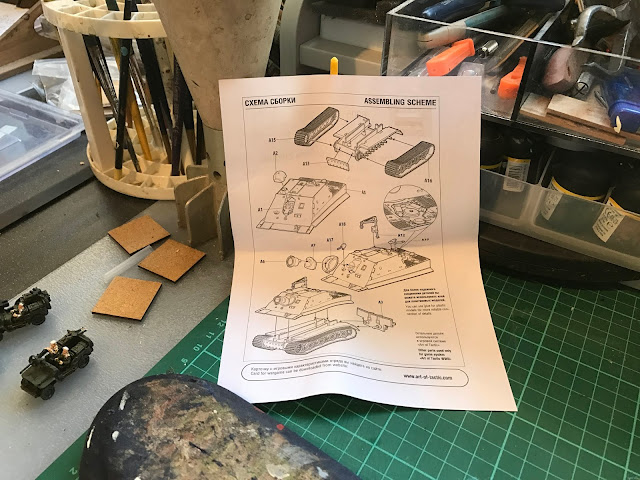 They obviously thought it too complex to rely on an exploded diagram on the box! 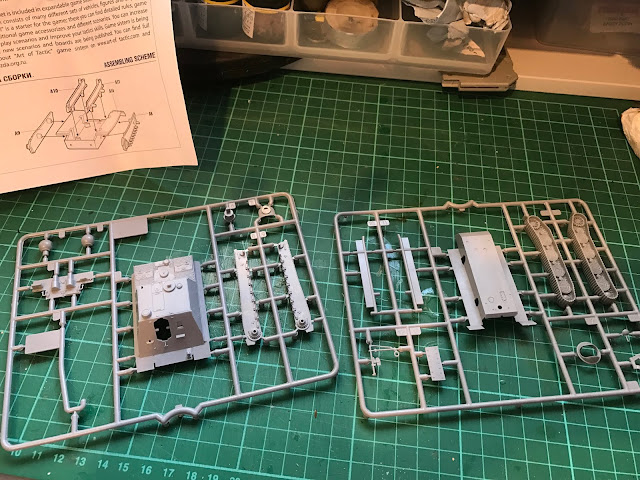 Once again all the parts are on two sprues, moulded in light grey polystyrene. 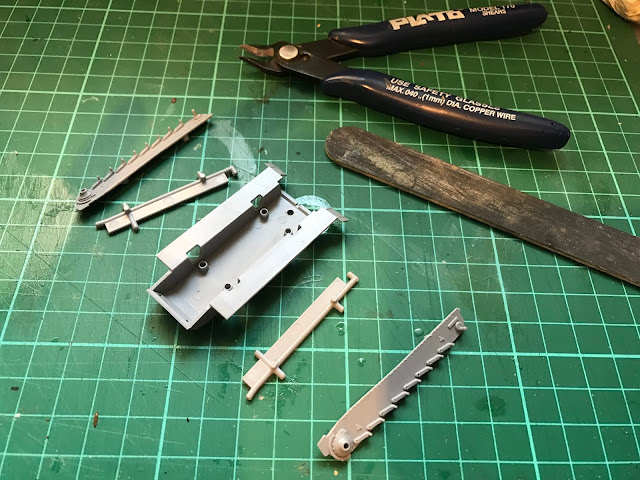 Starting again with the chassis, the kit uses what seems to be one of Zvezda's rather over complex means of attachment. I guess this is to make the model truly snap-fit, but does seem just a little over-engineered. 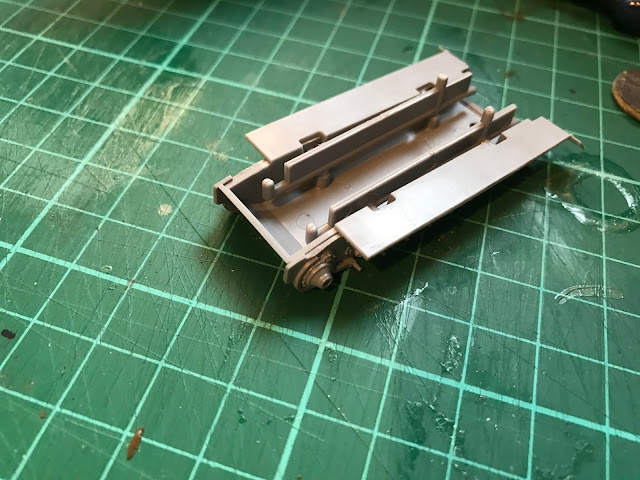 Once assembled it looks like this, ready for the track units to be attached. 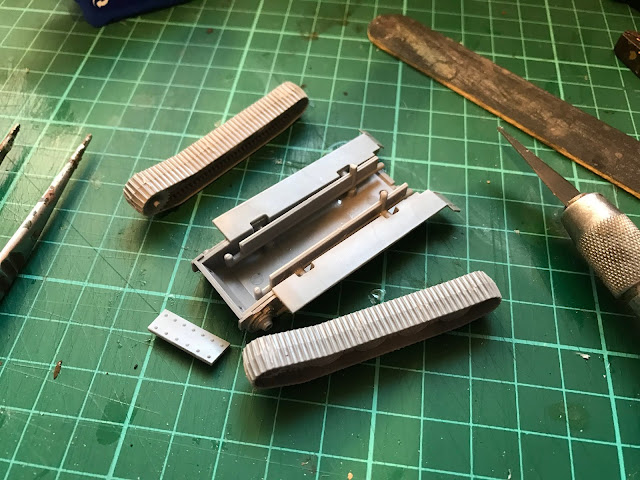 Also there is a front armour plate at the bow to be fitted along with the tracks. 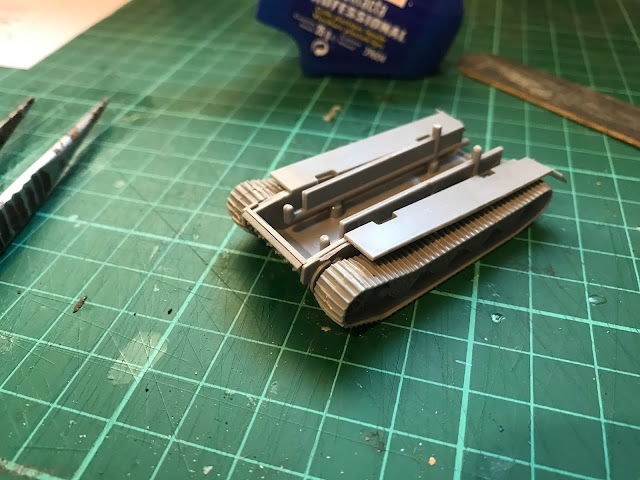 Once again, I have a tendency to mark the tracks when removing them from the sprues, no matter how hard I try not to. 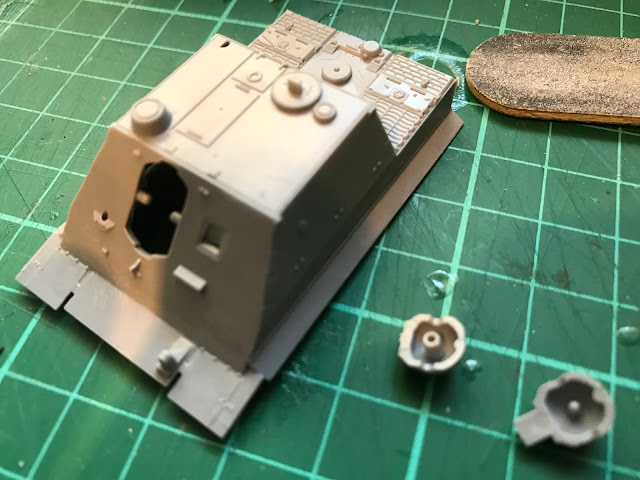 The body of the hull comes in one piece. Nicely detailed with interlocking armour plates engraved. All that needs to be done is to add the main gun etc. and the winch for spare ammo. 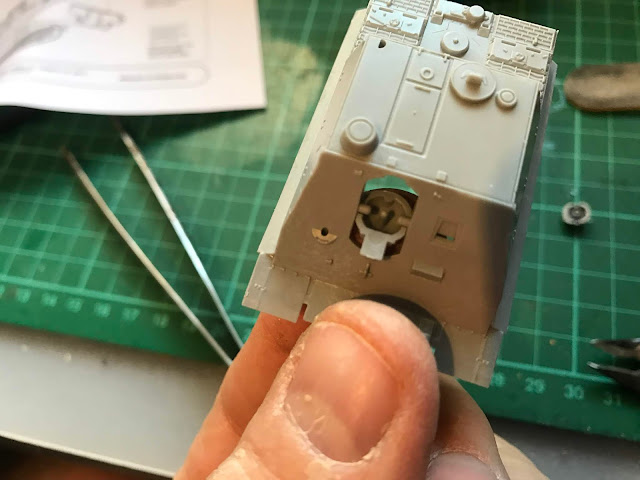 With care the back piece can be held in place whilst the front is glued. 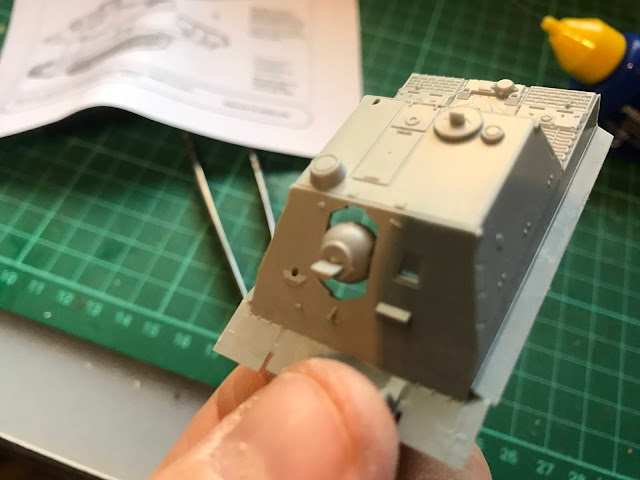 This then enables the gun to elevate freely. 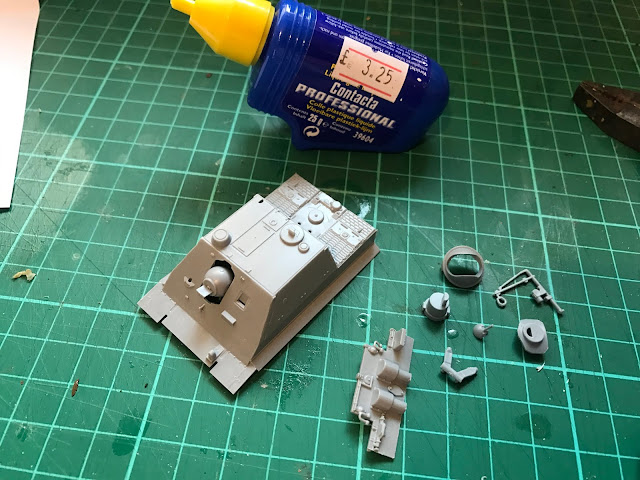 There is a large gun mount surround to add afterwards, and a mantlet, before the barrel is fixed in place. There is a finely moulded bow MG mount (take care with the barrel!) and the aforementioned winch to attach. The rear plate has the exhausts already moulded in place, but there is a part of the air ducting to add to the engine plates. 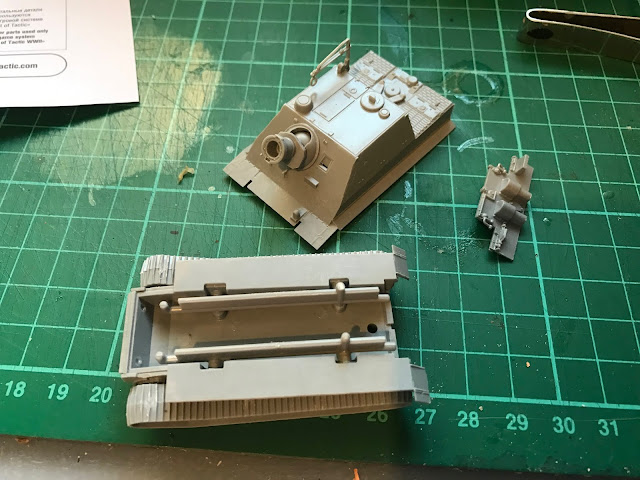 Finally attach the completed hull and rear plate to the chassis to complete the model. 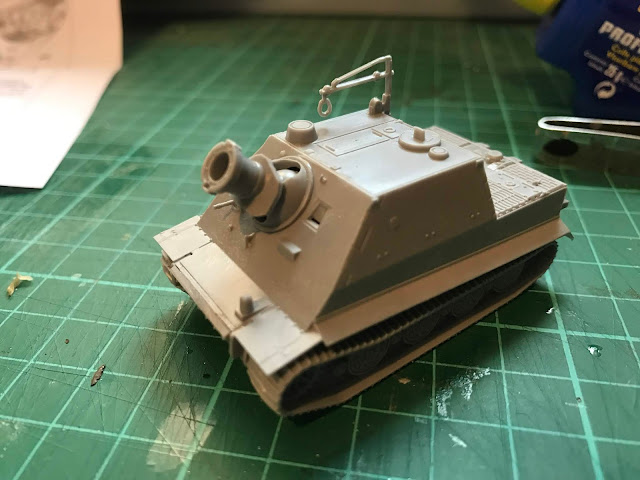 Another really nice little kit. Simple enough to build and gives a nice rendition of a rather rare Panzer. The late type steel rimmed wheels of the track unit, might prove to be suitable to produce a late model Tiger 1 when combined with another kit? 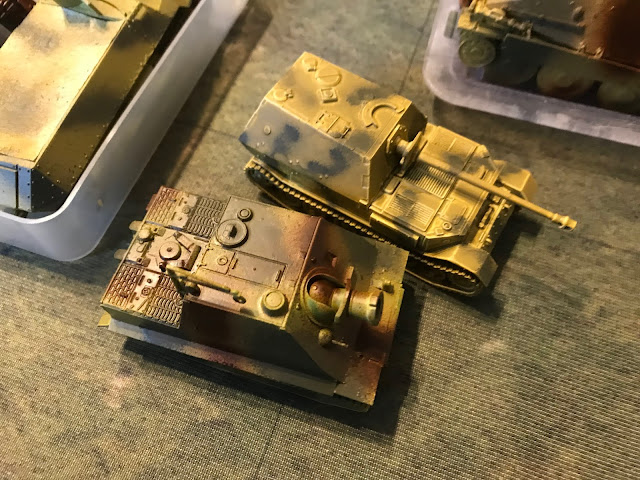 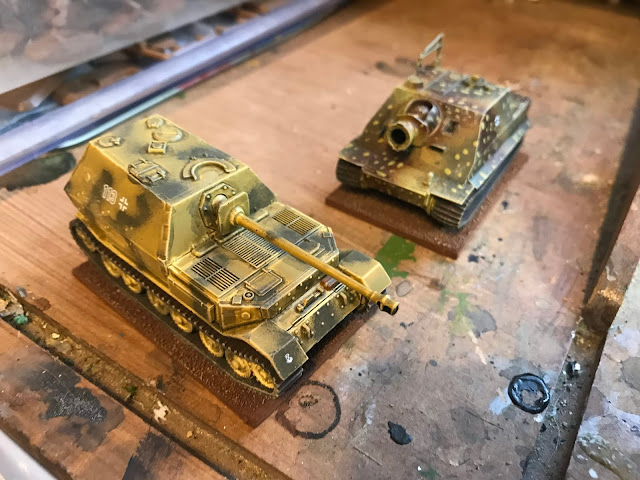 The Sturmtiger was given desert yellow flecks to the green and brown areas to create an "Ambush" finish and then both models were weathered with Vallejo Sepia wash and high-lighted with Vallejo Iraqi Sand. They were both based on sand covered mdf bases (as all my AFVs are) and markings added from my ever diminishing supply of surplus Dragon decals.

Excellent little models, fairly straight forward to assemble and enough detail to lead to a good finish. These are such good value at approximately £3 you cannot go wrong. What's not to like...?
Posted by TimsTanks at 15:12