After my first introduction to Wargaming (WRG Ancients) I sought out rules and figures to satisfy my real historical interest – WW2.

Leicester Micro Models produced the first rules vehicles & figures I bought back in the early 1970’s. These were little more than lead lumps!

From here I was drawn towards the Cold War “what if” type of battle and I ultimately collected 3 massive 1/300 US NATO, UK NATO & WARPAC armies to play with using firstly the WRG Modern AFV rules and then TTG’s Challenger by Bruce Rea-Taylor.

After a less than enjoyable experience taking part in the UK Championship heats in Bath back in the mid 1980’s (The first time I encountered “Rule Book Lawyers”) my interests moved on to other periods.

My much loved 6mm armies languished in a box almost forgotten until along came Cold War Commander. 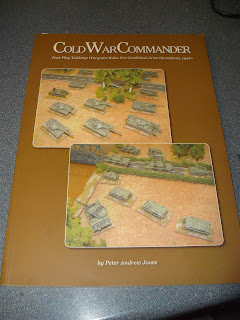 Since then, I’ve never looked back. I based the 6mm moderns on to Warbases mdf and repainted them where necessary and away I went.

Another period I dabbled with in the old WRG Modern AFV days was the Arab-Israeli conflicts of 1967-73. I’d enjoyed this period immensely, so when I saw a box of unloved & unpainted GHQ/H&R Israeli AFVs and figures at the recent Bristol Wargames Tabletop Sale I couldn’t resist.

Here’s the first instalment a 3,000-point Israeli Battle Group for the 1967 war. I've now painted them up to a high standard with Vallejo Acrylics, based them on mdf with fine sand and sealed them with Army Painter Ant-Shine varnish. Sadly I've no room for these little guys so they're going to be sold.

These guys have now been sold......but there's a 1973 Israeli army on the bench that'll be up for sale in a week or so. Keep checking back.
Posted by TimsTanks at 23:14