I bought these three Battlefront Shermans ready assembled and undercoated black at the Bristol TTS. 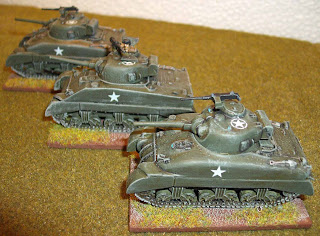 They were part of an 8th Army force for the desert war that a guy was selling on behalf of a friend in lots of two or three vehicles. I wondered at first if these would prove to be too early a mark of Sherman to use in Europe, but you can see from the picture that I needn't have worried. They do, however, all have dust guards fitted, but this is not unheard of in Europe so I was pleased with the finished result. 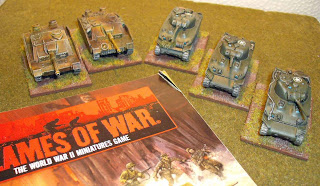 Having bought these, the very next stall I looked at was selling the introductory Flames of War set "Open Fire!" for only £10.  I knew from having bought one previously that this was a good way to buy 5 x 15mm AFV's cheap, but at this price who could say no. 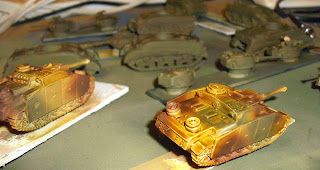 This boxed set comes with 3 Shermans with 75mm guns and 2 Stug IIIs together with a getting started guide to FoW and a miniature version of the full rule book. Useful to have a look through the rules and convince myself they weren't for me, but best of all were the cheap vehicles. They each come cast with tracks in place (turrets separate on the Sherman) and with white metal guns. 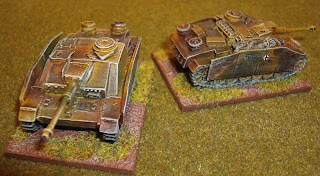 This is the old brittle style resin, and I managed to break the Stug's Bazooka plates while handling the model. The casting plug had been cut off between the track units and of the five vehicles I don't think there was one that sat square on it's tracks. This wasn't a big deal as I based them using Green Stuff to level them, but would have taken a fair bit of sanding to put right if I hadn't. 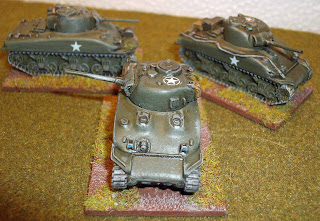 Painted up they make nice little models, each having it's own slightly different stowage already cast on.