At the same time I ordered my Stan Hollis figures, I ordered the Battlefront Sherman Crab. Together with my Churchill AVRE this will form the core of my "Funnies" unit for beach assaults. 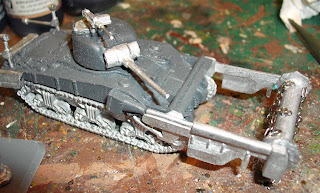 The kit has many parts (for once!) and takes a little longer to assemble that the norm. I think this is one of Battlefront's earlier releases as there was rather a lot of file work needed to get the metal track units to fit the resin hull. The only resin parts were the hull and turret, the hull casting being modified to suit the Crab role with the addition of mounts for the power take off booms and the blast shield across the front of the glacis plate as well as a locker on the left hand side for flares etc.

Everything else is supplied in white metal. There were the two booms to support the rotating flail drum, the two bins (used to dribble powdered chalk to mark mine-free clear paths) and extended light masts. Also there is the optional commander figure, the turret hatch and .50" MG. A particularly nice touch is the inclusion of a length of fine chain from which to cut the flails! 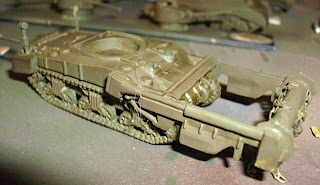 I assembled the model using Gel Type Super Glue as this helps to fill the inevitable gaps. The left and right booms cannot be fitted the wrong way round so this simplified the assembly, which is good given that there are never any instructions provided! The bins fit to the hull sides at the rear, sloping downwards. There is a sculpted hole in each bin, which should face downwards and to the rear (to let the powdered chalk dribble out!) so watch out. The extended lights on their stalks face rearwards (Some pics on the web make them appear to point out sideways). If you look at the sculpting they represent shrouded lights to be followed by other vehicles, so should point directly to the rear (don't forget to pick the lens out in red when you paint!). 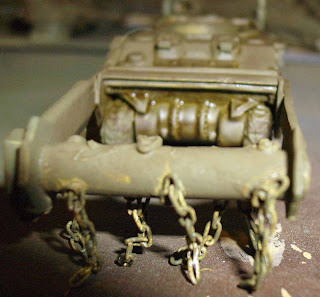 The chain that's supplied, cuts easily with side cutters and provided 7 pieces each approx. 15mm long. Each of these was secured to the flail drum with a blob of Gel Super Glue - spaced evenly around the drum - arranged to dangle downwards. Whilst hopelessly out of scale for the "rivet counters" out there, I think they look very effective. 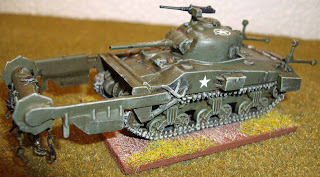 The finished model was given the usual coat of Russian Green, followed by Sepia Wash and then an overall dry brush of lightened Russian Green. The chains were simply painted Black and the tracks (which had a nice metal cleated pattern rather than the more usually represented rubber pads) finished in Dark Grey. The decals came from my QRF supply. 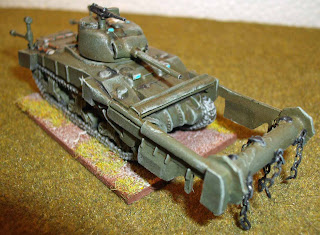 I'm very pleased with the end result. If you shop around you can get this model from as little as £7.65 (rrp £8.50) which isn't actually too bad compared to the other 15mm manufacturers for once.