Since I returned from my trip to Normandy in March, I’ve wanted to recreate a little bit of what I saw in model form.
Initially I had in mind to recreate an entire strongpoint in 2/3mm scale, but as reality dawned I realized this was not really practical as it would be too large to store even at that scale.
Plan B saw me scouring the net in search of suitable bunker models in 15mm scale that I might be able to use on the wargames table.
Surprisingly there are very few authentic models, many being nothing more than stylized imaginary constructions.
Then I stumbled on the 15mm historical scenery range manufactured by Antenocitis Workshop. 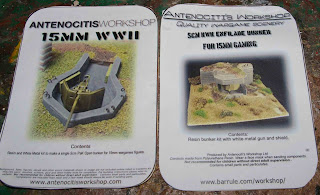 This range included two different 50mm emplacements and a 88mm casemate of the types found in Normandy. They also make a radar post and a Westwall bunker amongst other pieces. Sadly they don’t include (Big Hint here!) my personal favourite bunker – the “Tobruk” which are so common along the D-Day coast you loose count.
Anyhow that was me convinced – I sent off for the two 50mm emplacements on Sunday and they arrived, well packaged, on Wednesday. Excellent service! 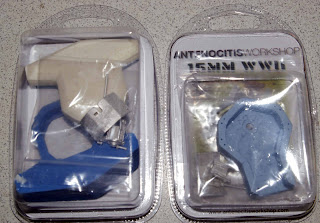 The first emplacement is the Vk600e, an open hexagonal concrete pit that was armed with a 50mm Kwk 39 or 40 pedestal mounted gun.
These emplacements are evident on just about every landing beach. The guns were obsolete antitank & tank guns from the 1940-42 period as mounted in Pzkfw III. They have a newly designed, spaced armour shield and 360’ field of fire. “Tobruks” aside, these were the most common weapon station on the beaches and were intended to target landing craft and infantry.

As they were somewhat exposed positions it was common practice to create a supporting frame from steel reinforcing bars and then covering the pit with a large camouflage net. To increase protection, there are documented examples of sandbag walls being placed between the pit and the sea.
The second emplacement was the Vk600sk as seen on Juno Beach in St. Aubin-sur-Mer. This was a Parapet style mounting, often built into the sea walls and was intended to provide enfilade fire up and down the beach while protected from naval bombardment by the 3.5metre concrete glacis and overhead protection facing the sea.
Many of these bunkers (and others) had an attempt at camouflage built into the concrete by adding random planks to the inside of the shuttering before the liquid concrete was poured. This left a zig-zag pattern along the edge of the overhead protection which supposedly would break up the outline of the bunker. There is no record of how effective this may have been! 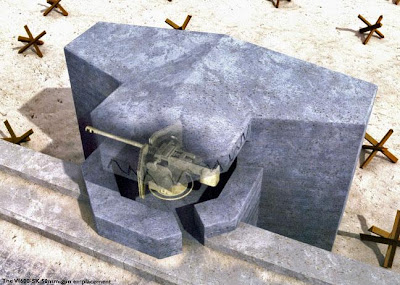 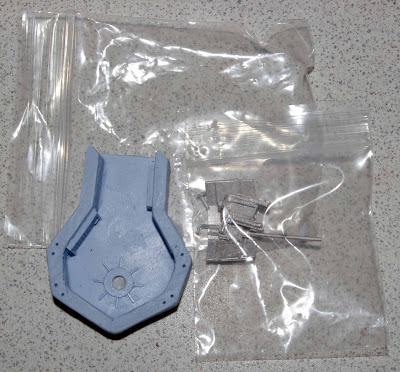 The 50mm open pit cost £5.59 and consists of resin and white metal parts. The resin casting represents the pit with the pedestal mount cast into the floor. There is fine detail of the concrete shuttering and recessed ammunition lockers in the walls. There are eight holes in the upper wall to allow steel hoops to be represented for the attachment of camouflage netting. The white metal parts are for a four part kit of the 50mm gun and it's mounting. This is very well cast and perfectly captures the look of the real thing. Both resin and white metal parts require some cleaning up as you would expect, but this took only a couple of minutes. 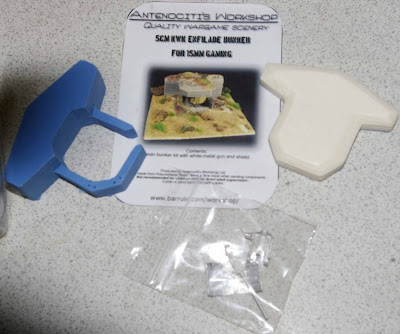 The enclosed enfilade bunker comprises two resin parts and the same four part white metal kit for the 50mm gun and costs £6.50. Once again only minimum cleaning up was required. You'll see from the picture that this bunker does not have a floor - so to mount the gun you're going to have to mount the whole thing on some form of base. 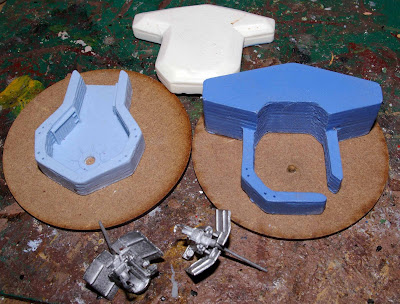 I was lucky enough to have a couple of large Warbases mdf circular bases in my spares box. These were perfect, and the bunkers were fixed on with superglue. I marked the point where the pedestal base would go and drilled a 5mm hole through in anticipation of final assembly. 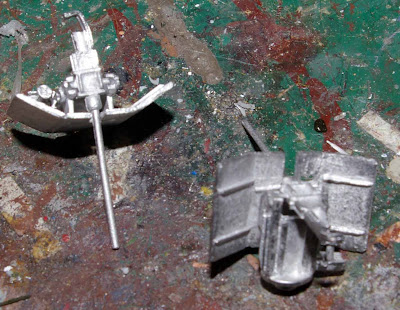 The two guns went together easily (again with superglue). There were two handwheels provided with each model but I am pretty certain there is only one required which goes in the hole cast into the pedestal base - see the photo reference I used below (taken on Utah Beach) 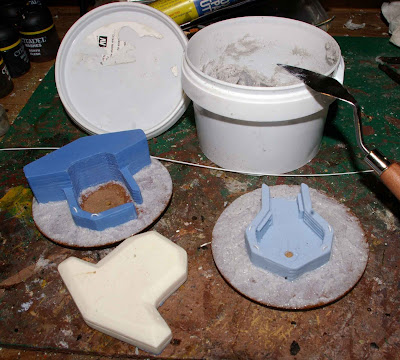 Last job for now was to texture the bases with Vallejo pumice. It would not have been incorrect to mount the pit emplacement flush with ground level, but I thought it was a shame to hide all the wonderful shuttering detail on the sides and opted to just lightly cover the base.
The eagle eyed amongst you will spot that I have represented the steel loops for cam nets with very thin plastic rod glued into the provided holes with superglue.
These now need to dry overnight before they can be primed prior to painting etc.