At the same time I ordered my USMC Minis from Peter Pig, I chose five packs from their AK47 range to start off my generic Middle Eastern forces. I say generic, because I haven't made any effort to brand these figures as any particular army - a bit like their manufacturer has done.

I figured that these minis could pass for Iraqi, Iranian, Syrian, Libyan, Cuban or any Soviet supplied Middle Eastern Army dependent on the scenario being played.

I have to be honest here, I have a bit of a mental block when it comes to wargaming current conflicts involving UK Forces (i.e. Afghanistan) and I am much happier re-fighting historical actions from 10 years+ ago or imaginary "what if" scenarios.

To this end, these figures were going to get a simple (i.e. quick) finish. Before I started it's always good to spend five minutes contemplating what you want your finished figures to look like and the strategy you'll apply to get them there. By this I mean deciding what colours to use and in what order to apply them. As I go through the stages you'll see what I mean.

First job was basing the figures on Warbases mdf 15mm dia disks. These were once again, textured with Vallejo Grey Pumice before priming White. When dry they received two sprayed coats of Vallejo Model Air Light Green. OK this might look a bit bright, but I believe smaller figures (i.e.15mm or smaller) should be painted in lighter shades to simulate how colours appear at distances.

Ultimately these figures are going to get an all over coating of Vallejo Sepia Wash. So as part of the planning ahead I spoke of earlier, the next steps were to paint the webbing (Brown), the boots (Red Brown), the faces and hands (Flesh) and the helmets and bases (Tan Yellow) as all these will be shaded with the Sepia Wash.

The wash was sprayed on and allowed to dry. It settles nicely into the well sculpted folds on the Peter Pig minis and darkens the green to a more military shade.

Once fully dry the complete figure was dry brushed with Vallejo Buff to pick out all the high-lights.

Now the finishing details can be added. The weapons picked out in Black and their woodwork in Bestial Brown and once dry, a dry-brush of Buff. Some of the figures had Shemags picked out in White and some "Elite" forces had their berets painted Maroon (a very popular colour for SF Headwear the world over!!). 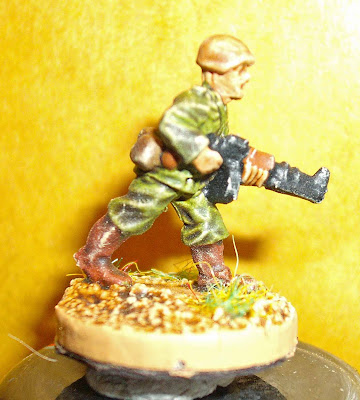 Finally, the edges of the bases were tidied up with some Tan Yellow, before the figures received two coats of varnish. Once they'd fully dried a little static grass was added to the base and after a self-adhesive magnetic disk was fixed underneath. 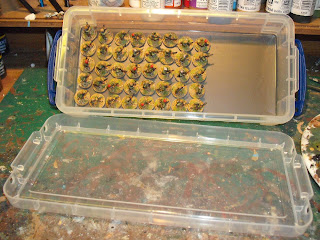 The finished minis are now stored in another Really Useful Pencil Box with metallised sheet attached to the bottom.

All-in-all not bad for three evening's work. Now to get on and read through those rules!
Posted by TimsTanks at 17:26