15mm USMC by Peter Pig for Force on Force

As you'll probably have gathered, I purchased a few figures to go with my IrishSerb Humvees, from Peter Pig. 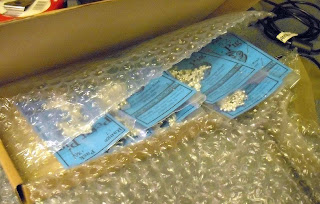 They arrived in the best packaging I've yet seen from a figure manufacturer. They were packed in a really sturdy long, slim box (like a pencil case) that completely protected the minis and had the advantage of fitting through our letter box.

Why do I get excited about this? Well living in the sticks and both my Wife and I working all day, means that many parcels don't get delivered and we end up having to make a 15 mile round trip to Hereford Post Depot to collect them! 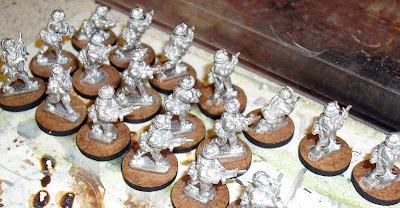 I'd ordered 40 USMC figures and 40 assorted Arabic type figures. The quality of casting was as good as ever and the figures needed only the bases filed flat before they were ready to attach to Warbases 15mm dia circular mdf bases. 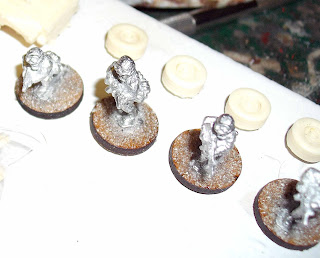 The bases were then textured with Vallejo Grey Pumice and left overnight to dry, before undercoating them with Matt White Primer the next day.

I planned to tackle these figures as quickly as possible, whilst still trying to attain a decent finish. The first step was to spray them with two coats of Vallejo Model Air Sand. (You probably guessed that I did this at the same time I sprayed my Humvees!) This base coat will be the only colour I apply to the uniforms - no attempt will be made to try and paint the new digital camouflage patterns. Why? well if you look at stills of USMC personnel in Afghanistan etc. that are in the middle distance (i.e.100m+ away from the photographer) you cannot make out the camo pattern on their clothing.....everything looks like one single drab colour.

Therefore why stress yourself out trying to paint it? The scale of the figures (1/100th) means that when you're stood 1m away from the table, you're getting the same view you would of a 180cm tall man stood 100m away.

You'll see that I've split the figures into 9 man Rifle squads and attached them, with Blutac, to plastic strips to make it easier to handle them while painting. 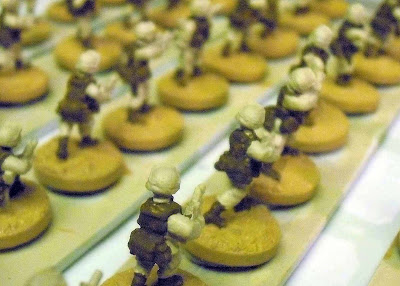 Next step pick out the load bearing equipment (Body Armour and all) together with the boots in Vallejo English Uniform. When dry the bases were painted Vallejo Tan Yellow.

Then the figures were sprayed Vallejo Sepia Wash. Peter Pig figures are so well sculpted the wash flows beautifully into all the creases and crevices giving a well worn appearance. 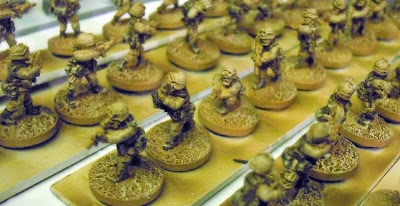 When dry, a generous drybrushing of Vallejo Buff to both figures and bases to catch the high-lights. I'm experimenting with a GW Medium Drybrushing brush - which I have to say does seem to do the job rather well. Up until now I always used cheap art shop brushes for the purpose. 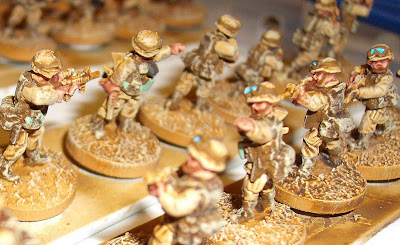 Time now to start the finishing touches. First a little sky blue applied to the goggles lenses on the helmets. 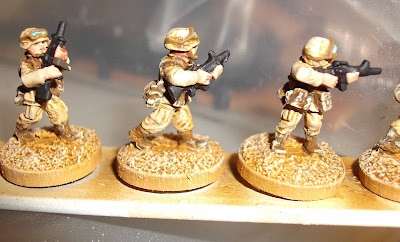 Then the Goggles themselves were picked out in Vallejo English Uniform. Faces and hands were painted flesh* with a flesh wash to follow, when dry. Finally the weapons were painted black followed by a drybrush of Dark Grey. Job Done!

*Now I didn't think about it at the time, but researching on Wikipedia, I now realise that 18% of USMC personnel are of Afro-American decent. So really I should have painted 8 or so figures as such. This I will do retrospectively. 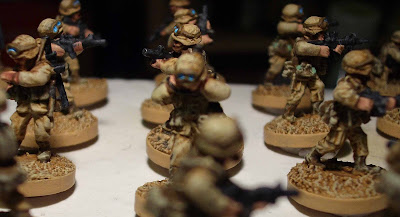 Finally two coats of varnish sees the minis completed. I glued a tuft or two of flock on each base just to represent a bit of foliage and break up the rather drab overall impression.

I decided to attach magnetic bases to the figures so the could be stored in a Really Useful Box pencil case, to allow ease of transport whilst offering maximum protection.
I bought the self-adhesive magnetic disks (15mm dia) from the Magnetic Displays stand at WMMS ready for just such a project, together with sheets of self-adhesive metallised rubber sheet for them to adhere to.

The disks stick well to the mdf bases but are slightly too big (or the bases are too small - not sure which??!!) so had to be trimmed to size. 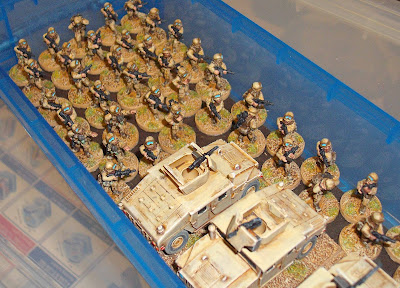 The bottom of the box was lined with metallised rubber and the figures cling to it like glue. It's a bit of extra work but gives a good storage solution. In case you're wondering, the Humvees have magnetised sheet attached to their bases too.

Well I'm really pleased with the finish of these, and also how quick they were to complete. Four evenings saw the 40 figures completed and in the box.