I decided for my first foray into 15mm Moderns I'd just get a few Humvees to start off with. As I thought I'd probably have a go at Iraq or maybe Afghanistan, I'd need armoured Humvees, so I started to search the Interweb.
I found that QRF, Old Glory and Peter Pig all supplied Humvees (albeit un-armoured) in the UK from between £4.50 and £5.50 per unit. Then I took a look at each on-line using other people's blogs (Bless them!)
QRF's offering did not appear to be one of their best sculptings, needing lots of cleaning up, but is open not a solid casting.
Old Glory's examples looked OK, but I dislike their insistence on selling everything they supply in numbers higher than you really want!
Peter Pigs's examples looked good. They were of the solid casting variety, but had interchangeable gunner/gunmount castings to increase flexibility. I was on the verge of ordering these when I stumbled on the IrishSerb's website.

Brian (the IrishSerb) is a wargamer who's putting a bit back into the hobby. He too wanted armoured Humvees, found no-one made them and rather than compromise he made his own master and cast them in resin. Now he offers these and a variety of other useful modern vehicles via his website at VERY reasonable prices - even when mailed to the UK. 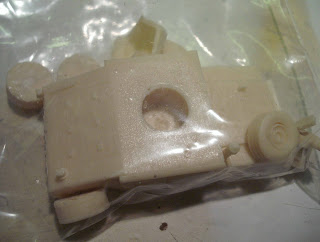 The models arrived, very well packed, just 5 days after Brian sent them. Each vehicle in it's own bag with an additional bag of spare parts just in case anything got broken. He takes PayPal making payment simplicity itself - 3 models delivered from the USA for less than £12! 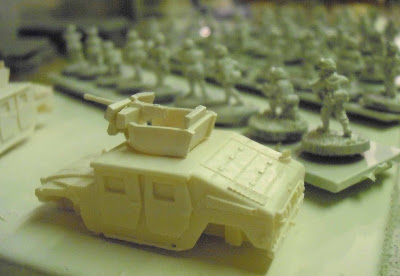 Each model is just 7 parts;- Hull, 4xwheels, turret & armament. I built up each hull quickly (no real cleaning up required) but left off the wheels to paint them separately. The completed hulls and separate wheels were then all sprayed in white primer. The turret looks like it can accommodate a 3/4 figure and can also be left to traverse freely if desired. I fixed mine in place and as I haven't any suitable crew figures, I left the turret empty for now. 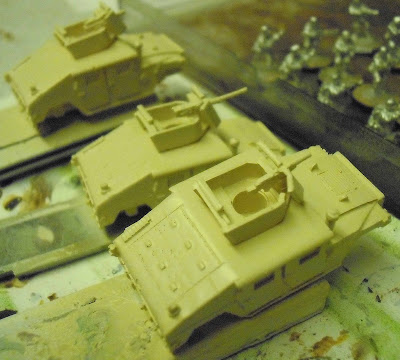 Next the hulls and wheels were sprayed in Vallejo Model Air Sand - two coats required to cover adequately. 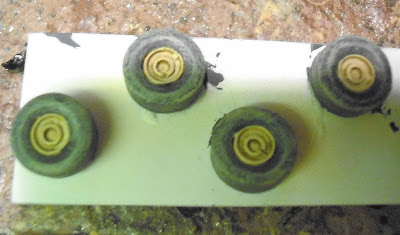 The wheels were washed with Vallejo Sepia and the tyres painted Dark Grey. When dry the whole wheel was drybrushed with white. The wheels were held on a plastic strip with blutac for ease whilst they were being painted. 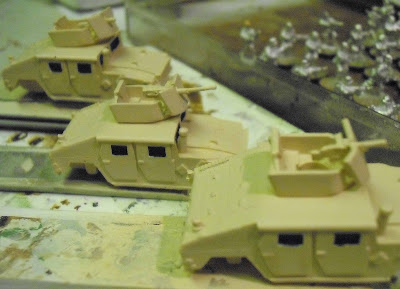 As the castings are of the solid variety, I picked out the areas of glass in matt black. 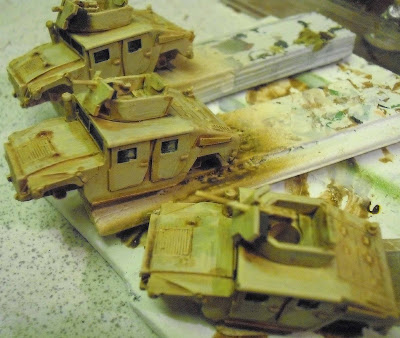 The hulls were then sprayed with Vallejo Sepia Wash. Once this dried the hull was drybrushed in Vallejo Buff with a fairly loaded brush. Areas around doors, hatches etc were picked out with GW Sepia wash (more orangy than Vallejo) and finally the hull edges were dry brushed white. 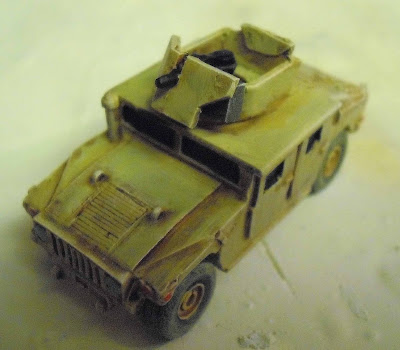 Final stages to finish off were the attachment of the wheels and painting the main armament. Fixing the wheels is simplicity itself - Brian has thoughtfully left a flat surface (where the struts and springs would be) with an overhang at the top to which the flat rear surface of the wheel is glued - this ensures each wheel is centred in the arch and at the correct depth from the top of the arch so the finished vehicle sits square.
The headlights and indicators where picked out and the underside painted Black. 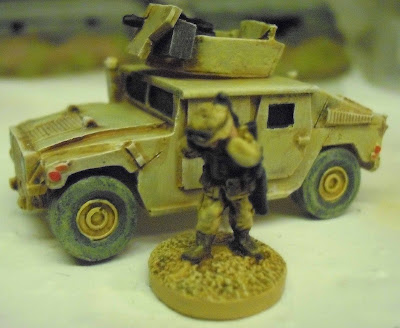 To complete these vehicles I will probably mount them on mdf bases to protect them and add a gunner figure, in time. I guess you could go to town and add aerials, bullbars and wing mirrors etc, but I'm happy with the way they look now. They're intended to represent an armoured Humvee on the table and they do that admirably.

I've got to say these little vehicles were the "find of the month" for me. They are just what I was looking for and I'm sure I'll be buying more. In fact when I need some M2A2's I'll be emailing Brian as well. Thoroughly recommended.
Posted by TimsTanks at 18:47