I had a quick look through the pre-publication FoF books available at the WMMS show back in March and was impressed by the production standards of this new rule set from Osprey. I wasn't so impressed by the £25 RRP. 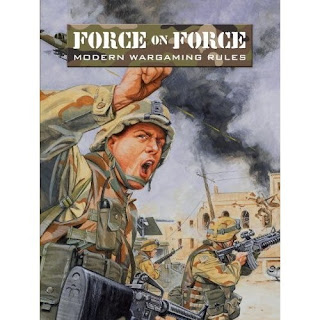 I was pleased then when I found them on Amazon for a very respectable £13.70 delivered and sent off for my copy straight away.

I'd been swayed by the various articles published over the last few months in Wargames Illustrated and Miniature Wargames - particularly an in depth article discussing the rules with their creator.

OK I know they're not strictly brand new, but they're new to me and they seem to have come up with mechanisms that neatly cope with some of the processes in small unit combat that aren't fully grasped by other sets of rules.

What I'm trying to say is here is a rule set that appears to capture small scale tactical warfare without getting bogged down in all the wrong detail.

Primarily, there's no weapons data tables! This means the rules avoid what I call "MG42 Syndrome" - meaning players cannot get into debates about the relative merits of different types of small arms - these guys know that it's all about how you use them not what they are.

Yes an MG42 may have a cyclical rate of fire of between 1200-1500rpm when compared to the good old Bren Gun's 500rpm - but when you consider that a belt in an ammunition box is only 250 rounds long can you see yourself carrying enough boxes just to prove the point? NO. The German gunners used their MGs in the light role just like we did ours, firing short controlled bursts to conserve ammo - so there's no difference or no advantage between an MG42 and a Bren.

It's all about discipline which comes from training - and this is what FoF concentrates on neatly allowed for by using different dice (D6, D8, D10 or D12) when trying to score the almost universal success score of 4+. Simples.

I love the concept and hope the rules measure up when finally played!

To do this I've branched out into 15mm Moderns - 4 squads of Peter Pig USMC and 40 odd assorted Middle East troops (Iraqi's maybe) armed with the usual AK47s and RPGs. Oh and 3 Armoured Humvee's to get about the table in.

Now, where's my paint brush?
Posted by TimsTanks at 17:46