Whoopee....reinforcements have arrived from Irregular Miniatures!
I've ordered a "Town/Suburb" and "Riverside town" terrain pieces to make two new BUA terrain tiles (each 60x60mm) which you can see to the right, top corner of the picture. These come in at a whopping £2.40 each, but make the production of the tiles simplicity itself. All I need to do is smooth around the edges with a bit of acrylic modelling paste, to blend the castings in, and they'll be ready to paint.
I've also ordered sufficient miniatures from Irregular's range to build my Rommel forces up to Divisional strength. I will now be able to field a 1944 British Armoured Division with either Sherman or Cromwell as their main AFV (modeled on the Guards & 7th Armoured Divisions) and a 1944 Panzer Division (modeled on Panzer Lehr & 12th SS Panzer Division Hitlerjungend) 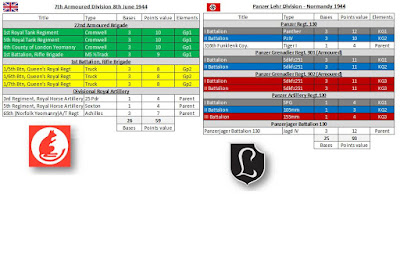 I've been knocking together some organisation tables to help me remember who is in which element using colour coding that I'll then apply to the base tags. This is an early draft, but you'll get the drift.

I'd better get on with painting these little beauties up.....
Posted by TimsTanks at 14:49