As a further taster here’s a draft version of the scenario map. 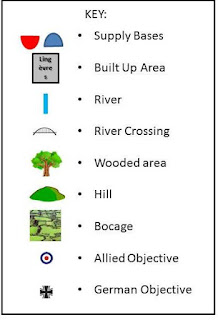 It’s somewhat stylised to ensure that all the key features of the battle area are included. 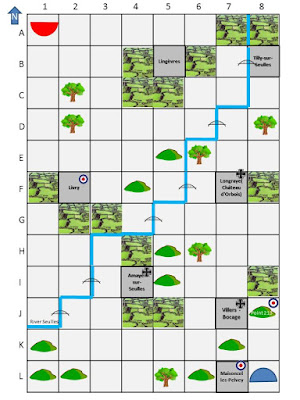 The Allied force enters the table and deploys in grid squares A:1- A:5. (Army Cards)

The historical plan for 7th Armoured Division was as follows;-


The German Forces will be scattered to the East of the River Seulles.

I haven’t a clue how to do it yet, but will come up with some random system of generating force strengths together with when and where they enter the table. This will be made up of elements of Panzer Lehr, 2nd Panzer Division and of course Wittman’s 101 Heavy Tank Company.

The actual battle lasted two days culminating with 7th Armoured Division withdrawing to a holding position around Amayé-sur-Seulles. This was due to Brigadier “Looney” Hinde deciding to take an overnight stop around Livry following an attempted counter-attack from elements of Panzer Lehr.

For gaming purposes I think the battle will fit into the standard 16 turn game.

Please feel free to pass comment as this plan evolves.
Posted by TimsTanks at 10:47