I built all my 28mm AFV hoard together, as I planned to camouflage them using my airbrush.

I don't leave the airbrush set up when I'm not using it and, to be honest,  it's a bit of a pain to get it  out ready to use. So when I do use the airbrush I try and maximise it's use, spraying as many things as possible!

So you'll notice evidence of it's recent use in both past and future posts.

The first finished AFV I'll talk about was the Warlord Games  Panzer IV which can be built as an Aus F, G or H.

The model was moulded in grey polystyrene and pretty well flash free.

Assembly is straight forward and also flexible enough to allow some parts to be painted on their sprues. To facilitate this I primed both sprues with matt white spray. before I started to assemble.

One departure I made from the assembly instructions was to leave off the running gear until later. I assembled these on the sprues (i.e. added the drive sprockets and rear idler) but left them attached for now to ease the spraying.

The track links (one top piece and one lower run of track) where also painted on the sprues. To do this I spray them Matt Grey and then a coat of Vallejo Flesh Wash (looks good as rust too!) followed finally with a dry brush of Silver on the raised edges.

The hull and turret went together easily. I chose to leave the turret commander's hatch open and painted up the commander half-figure supplied with the kit. Whilst not their best ever sculpt, he was more than adequate for the purpose.


The turret spaced armour needs care to attach correctly, but once on, and thoroughly dried, it is strong enough to cope with repeated handling.

I opted to omit the moulded radio aerial  as this will only get broken off during wargaming.

The side skirts were assembled off the model ready to attach as the very last job. These each had four strongly moulded brackets by which they will be hung from the tank's hull.

Once all the main components (Turret, Hull, Track Units, Tracks and side skirts) were assembled I set about spraying. The base coat was German Dark Yellow - all the paints coming from Vallejo's Model Air range of colours - then the camouflage pattern was over-sprayed with German Tank Brown and finally German Tank Green.

Once thoroughly dry (my Loser Shed is a little cold at this time of year and paints take some time to harden so I left these overnight to be certain) I painted in the details like the tyres in dark grey, pioneer tools, extinguisher etc.

Then it was time to weather things a bit. I kept this simple by adding shadow/depth with some Vallejo Sepia Wash and highlights by dry brushing Iraqi Sand.

I assembled the track units off the vehicle, touched up the paint where needed and then attached them to the hull.

Finally I added the side skirts. These need a lot of care to ensure the brackets have all adhered strongly to the hull. My first attempt failed when I picked up the model squeezing the side skirts, and as I did they came away.

Lastly, before spraying with matt varnish, I added a few decals. The set supplied gives plenty to choose from, but I stuck with a turret number, Balkan cross and divisional symbols. 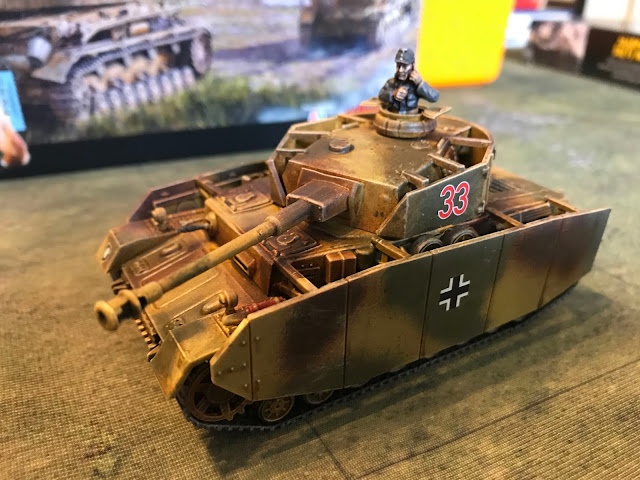 A smashing little model when completed, quite robust as long as I'm careful with those side skirts. 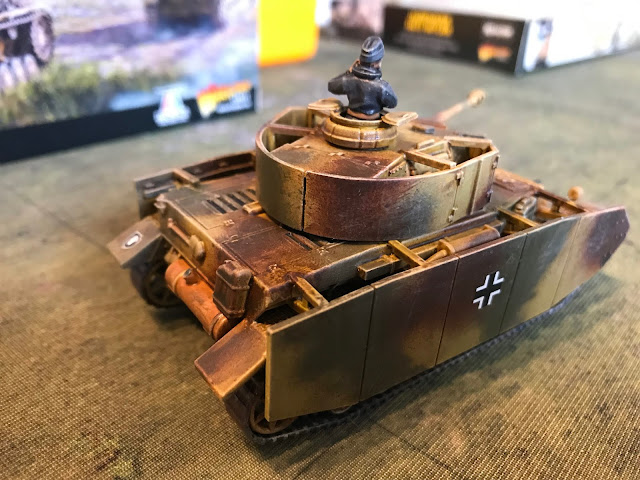 I bought mine at Reveille II for just £16 which I think was a very good price. Build time is very quick, quicker still if you're going to brush paint it! You won't be disappointed. 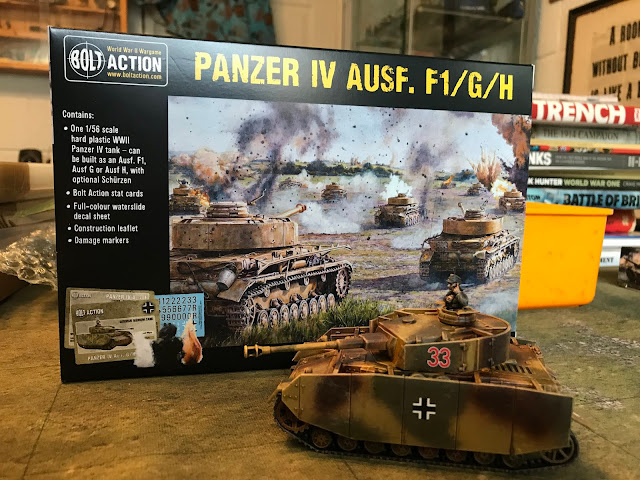