Having watched Warlords YouTube play through of the opening scenario for Cruel Seas, and rather enjoying it, I asked myself can the game really be as broken as people were saying on the various forums? 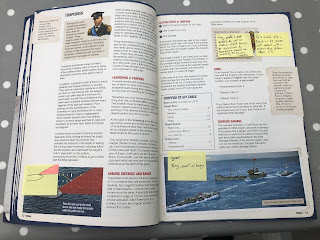 To try and quantify this I decided to hand-write the errata/additions onto 50x35mm Post-It notes and add them in the appropriate place in the book. This way I'd have the changes to hand when I read through without the book being trashed by adding bits of paper that couldn't later be removed.

This took 20 Post-It notes to do as I ignored the trivial amendments to Scenarios and ship data.

Not ideal, but when you actually get to noting what the amendments really are, I must say they're not as bad as I was led to believe. In fact I can see how initially, no-one would have noticed had they played the game straight out of the box.

I think the issues lie mainly with the "Simulation" crowd (as opposed to the "Game" crowd) as they maybe take too many liberties with what might be termed historical "Accuracy"?

Any how, Warlord have now come up with a pdf QRS which has the corrected details. This was three pages llong, but ten minutes with Windows wonderful Scissors application, and good-old PowerPoint, it has now become a double sided document that has all you need for play.

I've also invested in some rather nice mdf data card holders that incorporate sliding discs to replace the cardboard slider thingies that came with the game. These look rather good and I'll post a picture when they are assembled.

I've very nearly painted my initial fleets of freebies + starter set and am now looking forwards to trying them out.
Posted by TimsTanks at 15:08