I played my first Solo game of Cruel Seas a couple of weeks ago and thought it might be worthy of an after action report. I had genuine fun playing this game which I have to say, really lends itself to solo play with the random dice activation mechanism.

I chose to play the 2nd scenario from the book, where a cargo vessel/tanker has to travel from right to left, protected by two S-Boats from three Vosper MTBs.

I played this on a 4 x 3 foot table area, using my GW Dreadfleet cloth play mat and some simple terrain (Modular hill doubling up for land and some random rocks). 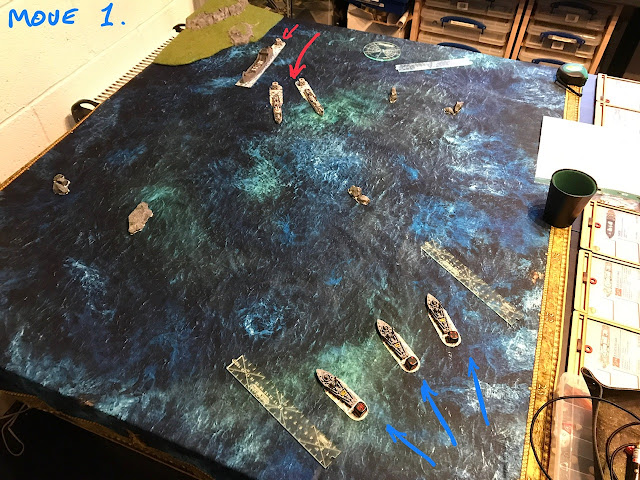 Move 1: The three MTBs start from stationary as the S-Boats peel off to head them off before they can reach the slow moving tanker. 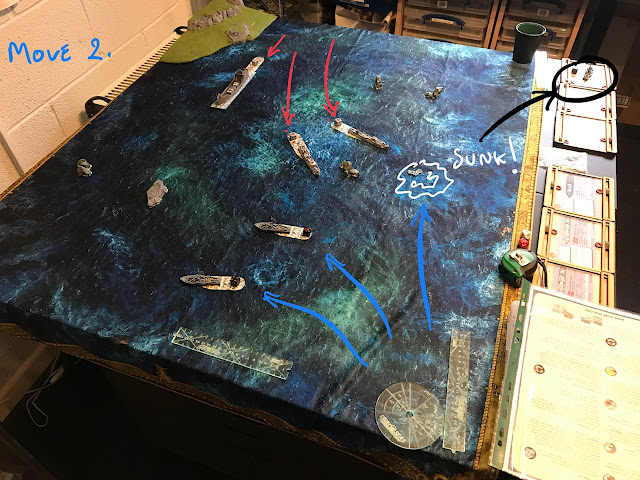 Move 2: A chance to find out how decisive (and bloody) Cruel Seas can be! My right hand MTB was caught off-guard by the two S-Boats and, with some lucky dice rolls, sunk! 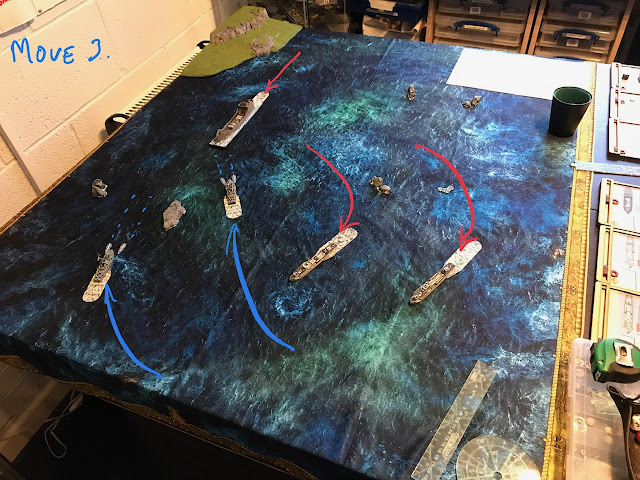 Move 3: The remaining two MTBs continued regardless and positioned themselves to launch a brace of torpedoes each. Meanwhile the S-Boats swung round to attack them from the rear. 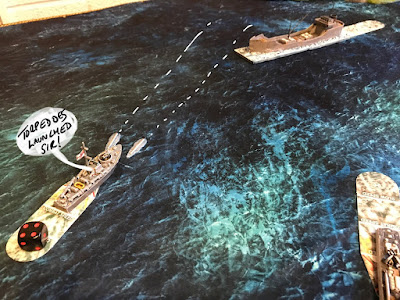 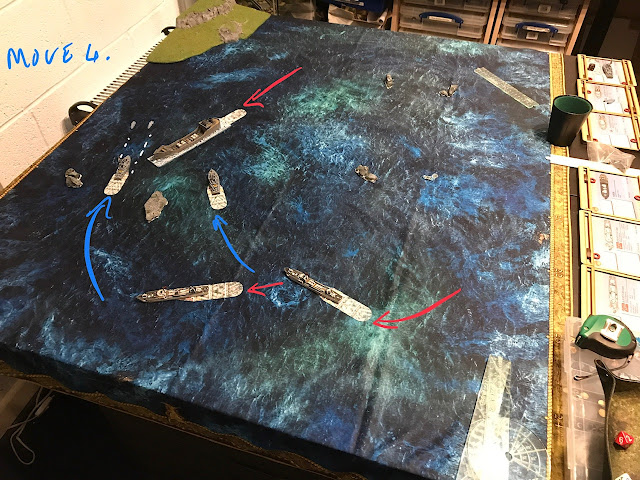 Move 4: The torpedoes from the centre MTB failed to have any effect and those from the left hand MTB completely missed the tanker. The S-Boats started to engage the remaining MTBs - one each. 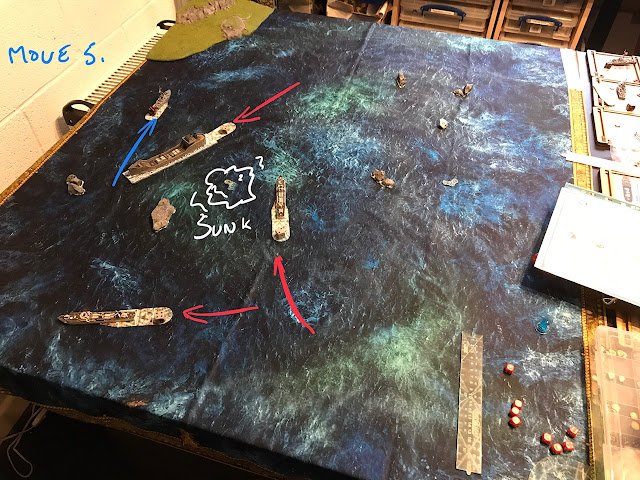 Move 5: The left hand MTB found itself in the path of the Tanker and a collision resulted. The MTB was left severely damaged, but managed to limp on past the Tanker, which was itself, largely undamaged by the encounter. The centre MTB was engaged by one of the S-Boats and sunk.... 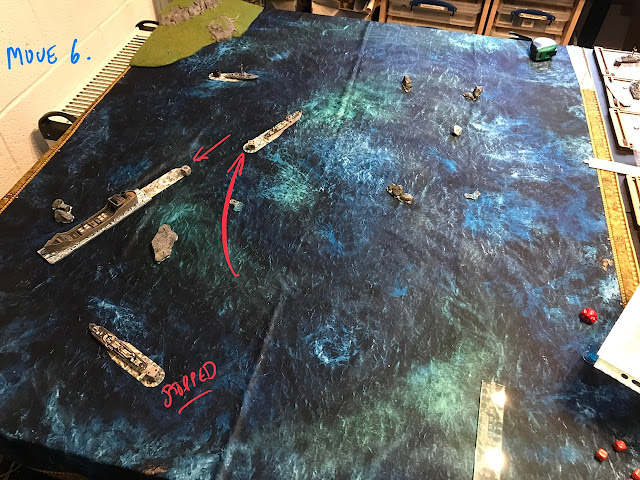 Move 6: The game was academically over now, but I played out the last few moves to see the Tanker leave the board. The nearest S-Boat slowed to a halt to avoid colliding with their Tanker, while the other S-Boat set off after the damaged remaining MTB. 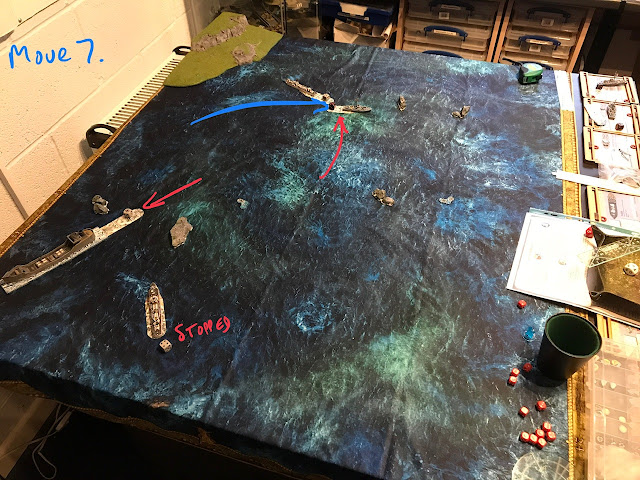 Move 7: The S-Boat caught up with the MTB by the rocks at the top of the picture. A brief gun battle proved inconclusive (due to the relative speeds of the two vessels) and the last MTB made their escape. The other S-Boat manoeuvred while stationary, to avoid both the Tanker and the rocks. 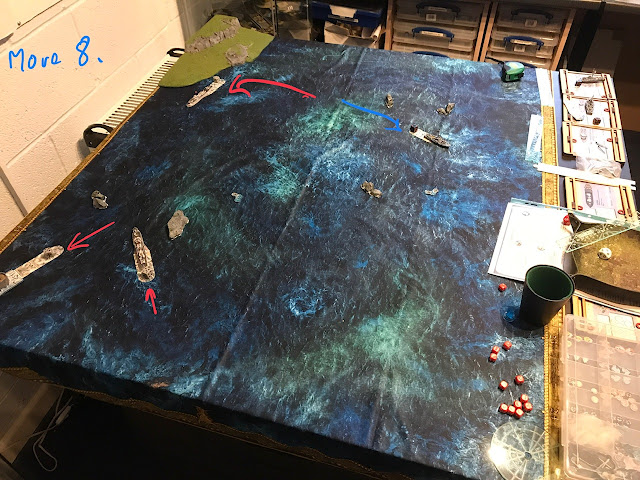 Move 8: As the last MTB limped off the board towards safety, the two S-Boats were both having to do some careful manoeuvring to avoid hitting rocks/land obstacles. Meanwhile the Tanker exited the board - Victory to the Germans!

Naval wargaming for me is just a pleasant diversion from what I usually do. Therefore I don't see me buying any more ships than I have already (maybe print some though😄). However, I will certainly play the game again.....it's fun! I know there are a few house rules appearing to try and make things "more realistic" but, to be honest, I don't have any need for them on the experience I've had so far.

Hats off to Warlord, a jolly good game.
Posted by TimsTanks at 09:23