At this January's Crusade Show I purchased a resin terrain piece from The Square.

Now this isn't unusual as over the year's I have quite a few of their pieces in my collection as they frequent the shows that I attend. However I'm not sure how well known they are widely, as they don't appear to have much of an interweb presence other than a Facebook page (https://www.facebook.com/The-Square-Wargames-Modelling-388837544922073/).

Most of what I've purchased in the past were small scale items (6-10mm), all are cast in a grey/brown hard resin and, universally, all paint up much better than you'd expect when looking at the raw casting!

Like many old school resin casts they display air bubbles that may need filling, as well as a little flash that needs careful removal due to the brittle nature of the material.

The sculpts are always good, and detailed and are priced well. They present excellent value for money.

I believe that The Square also own the old Wild Geese 1/200th range, though I've not seen them on their stand. These were some of the first 1/200th WW2 kit that I owned (and still have them) and were good value at the time.

Back to Crusade, and my eye was caught by the site of a large resin piece that on closer examination was a 15mm scale earth fort in the style of an ECW Sconce (though I guess it could do for any black powder period i.e. American War of Independence, ACW, Napoleonics etc). It was priced at £14 and to my mind it wasn't worth trying to scratch-build such an item if that's all it would cost.

I had no obvious need for such an item, but I couldn't resist. I think I hoped it would rekindle some interest in painting my 15mm ECW armies that still languish in a really useful box... 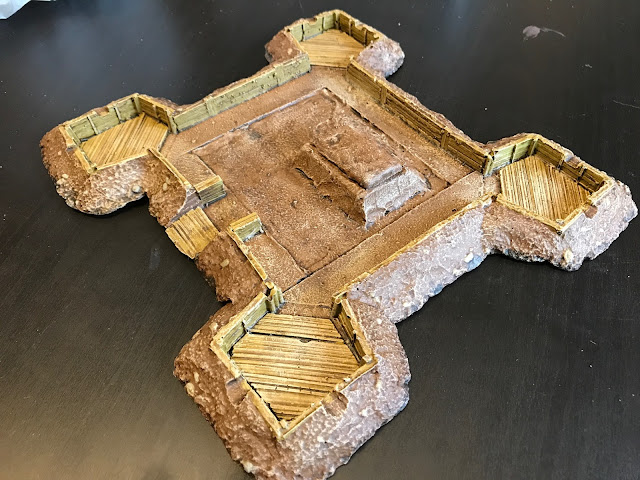 It's a simple single piece cast with four timber lined bastions linked by timber re-enforced breastworks, one of which contains the entrance. Centrally there is an earthen powder store (?) with a separate removable roof.

I did the bare minimum of cleaning up, before spraying the entire piece in Army Painter Leather Brown. I then painted the timber revetments and boards in Vallejo Middlestone, the stones in the earthen ramparts with Light Grey and then the entire model was given a coat of Vallejo Sepia Wash.

Once dry the entire model was dry-brushed Iraqi Sand before being given a coat of matt varnish. 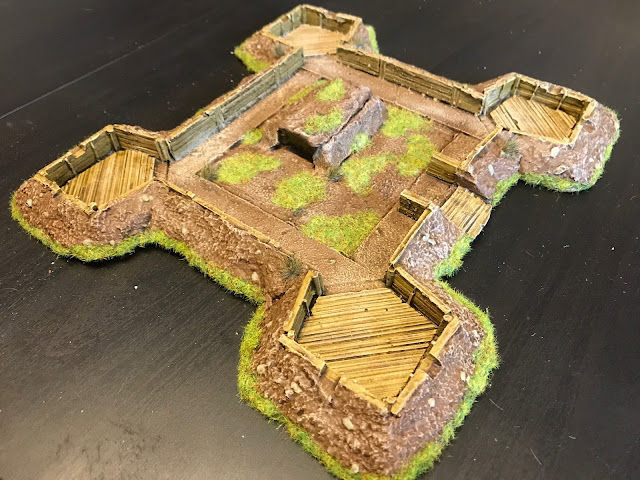 Finally to finish it off I added some static grass here and there to help it to blend into my GW battle mat.

I'm very pleased with the finished article. It will make an imposing centre piece in any siege game. The bastions will take guns mounted on a 30x30mm base (mine are on 40x40mm) so I may need to consider re-basing.

And has it rekindled my desire to paint 15mm ECW figures....? Well currently yes! Let's hope it lasts!
Posted by TimsTanks at 09:58