One thing missing from my growing Bolt Action/Chain of Command late war German army was any form of towed anti-tank capability. 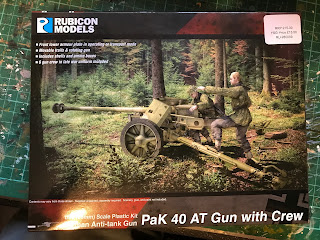 To put this right I treated myself to the Rubicon model from Firestorm Games - at £13.50 it looks to be good value for money. 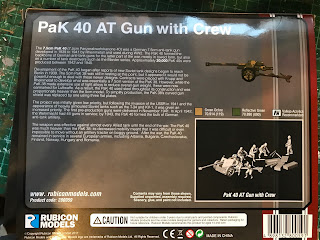 The model comes packaged in a nicely illustrated card box together with a glossy, printed instruction leaflet. 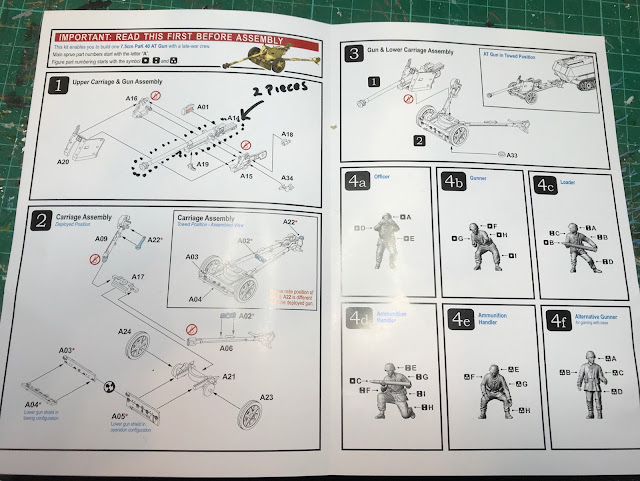 Having built models of one sort or another most of my life, I have now got into a tried and trusted routine of checking the instructions stage by stage and looking at the corresponding parts, before I start with my side cutters and glue. 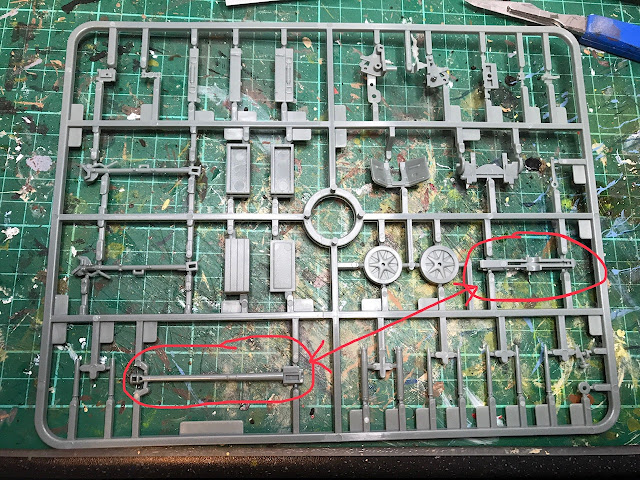 Luckily this turned up an issue with the assembly instructions. In step 1. the instructions show the gun barrel & recoil assembly as one complete part. Evidently they are separate parts on the sprue! (see above). This is easily overcome by starting with assembling these two parts...but be aware!

I was attracted to this particular model as it included a crew of 6 plus a good selection of whole rounds, empty cases and shell packaging equipment. The figures come on three sprues, two figures each, and are "anatomically correct" in stature, as opposed to "Heroic". More on these later. 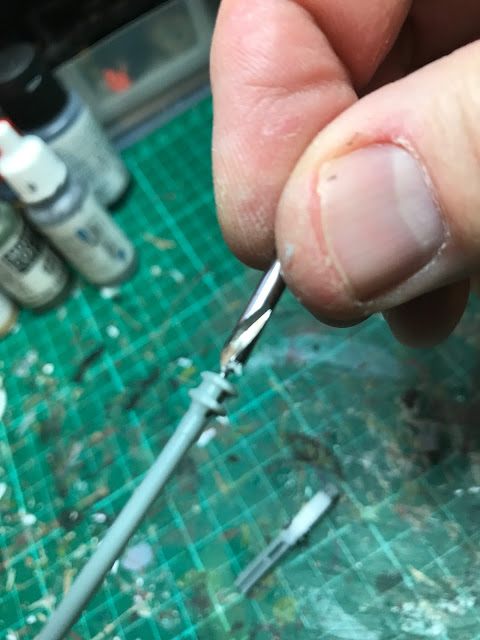 Whilst assembling the barrel and recoil system I drilled out the muzzle break to enhance the look of the finished gun. 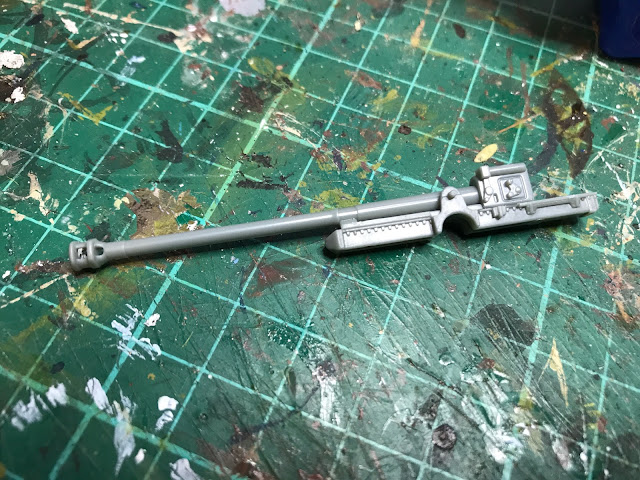 The breech assembly has a few fine parts that need some care whilst adding, but nothing too difficult. 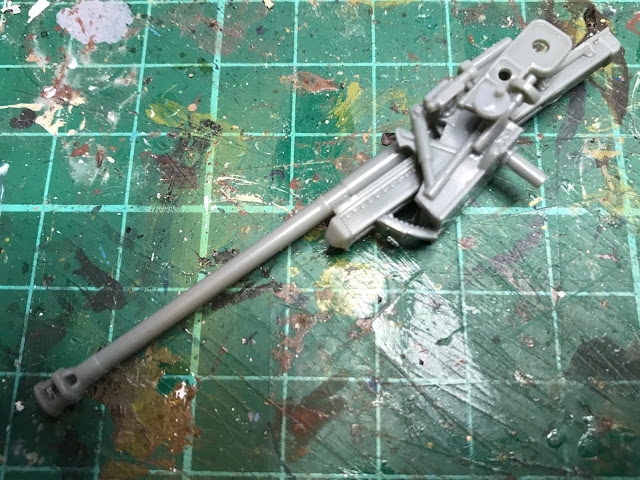 Again, there are some more small parts to add to the gun mounting, but with care they aren't too difficult. However, some of the location tabs/recesses provided were not of the required size and needed a bit of "fettling" with a scalpel. With care the assembled mount will allow the gun barrel to be elevated, if that's your thing! 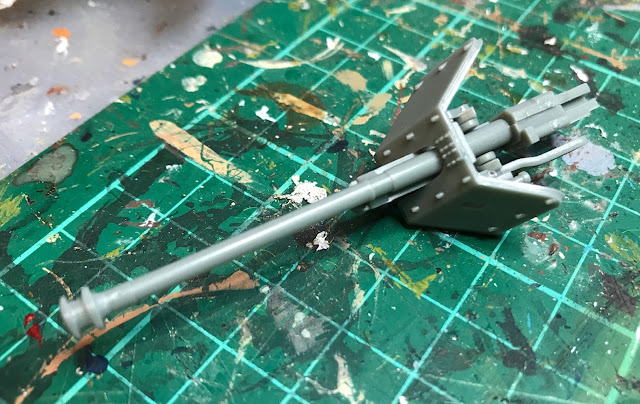 Next was adding the gun shield. This glues to four points on the gun mount, be careful to ensure it is touching on all four of these as failure to do so will leave the model weakened and the shield likely to fall off ..... guess how I know! 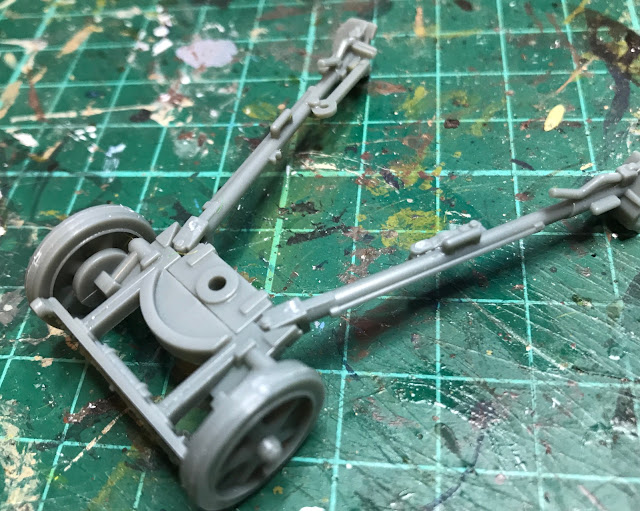 The carriage is straight forward to assemble as a separate step. Again with care the trail arms can be left movable. There are some optional parts to consider here depending on whether you will depict the model in a firing or towed configuration i.e. the towing eye and the front, lower armour plates. 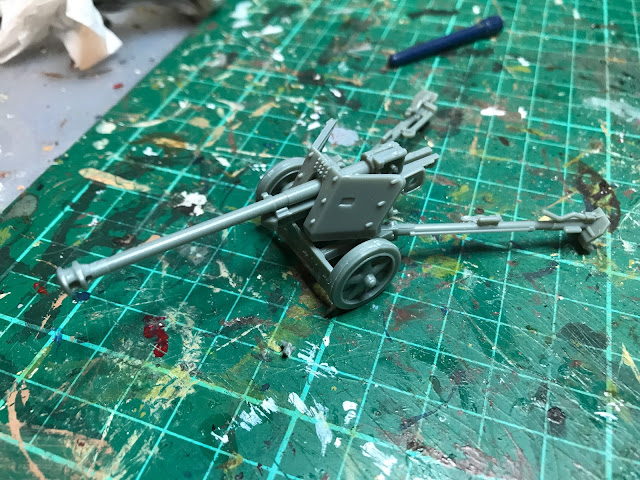 Finally the two assemblies come together and (with care) can be assembled so there is a degree of rotation available to the gun. Altogether a simple model to build with adequate detail for a wargames piece that will look good on the table. 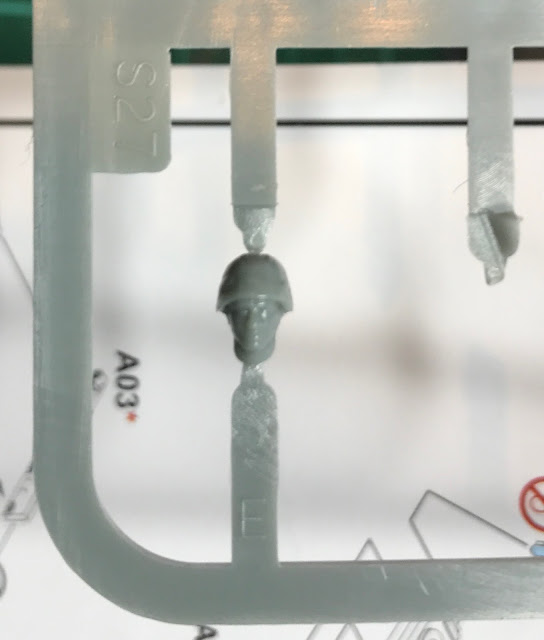 Whilst they are nicely sized, the sculpting leaves much to be desired. The bulk of my German figures are dressed in Field Grey jackets & trousers, so having a crew dressed in Camo Smocks wasn't top of my want list. To be honest, the detail is that indistinct I think I could probably get away with just painting them FG. The heads are particularly "Blurred" and I chose to replace them with Warlord items (thank goodness there's always so many spares!) to better help them blend in. 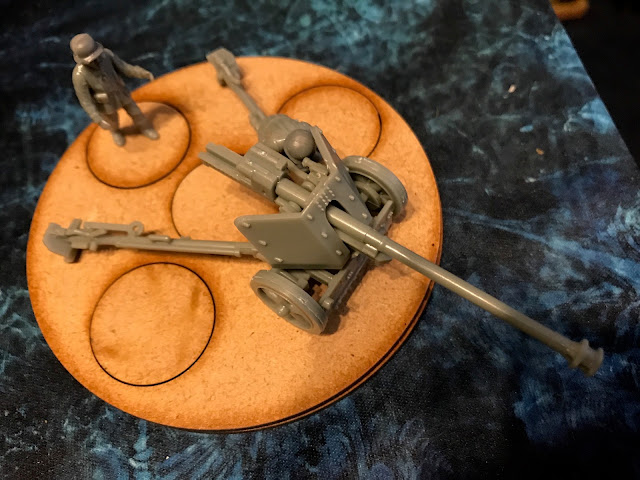 To mount the model, I purchased a ready cut large artillery base from Just Lasered. This allows up to 4 crew figures to be mounted on 25mm removable bases (included) to simulate casualties.

I will finish the model with a crew of five, one seated astride the trail leg, aiming the weapon, the rest on the bases provided.