As ever, I've been neglecting my blog through work commitments....however, I have something a bit different for you this time...a battlefield visit report!

As I was working in the Normandy area I decided to make a trip to see the site of the Bruneval raid, otherwise known as Operation Biting, 27th February 1942. 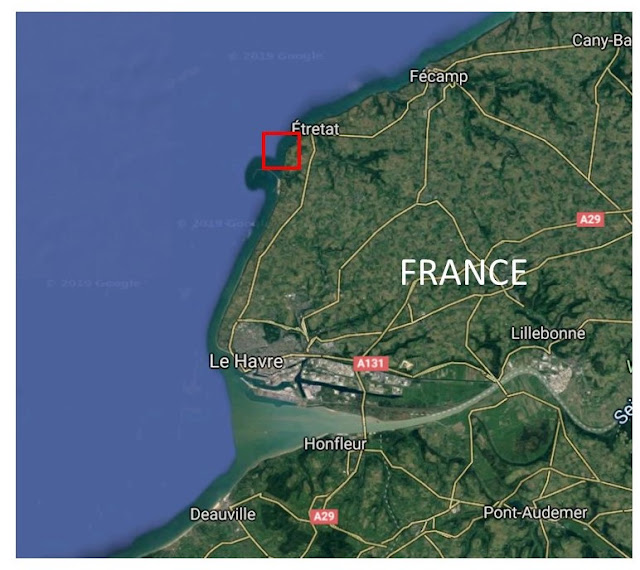 Firstly for anyone who wants to make the same visit be careful as many of the present day village names differ from those in common use in 1942 and were printed on contemporary maps of the raid.


There is much written about the actual raid elsewhere, so I don’t intend to go into too much detail. See -  https://en.wikipedia.org/wiki/Operation_Biting

The plan was simple; - 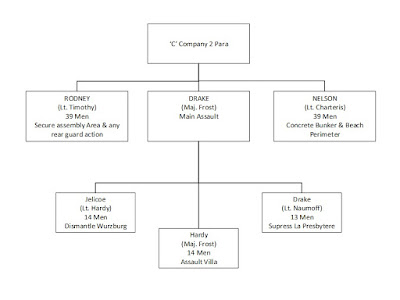 The plan was executed almost to the letter. Apart from 2 sections of NELSON group, all the paras landed on the designated drop zone. 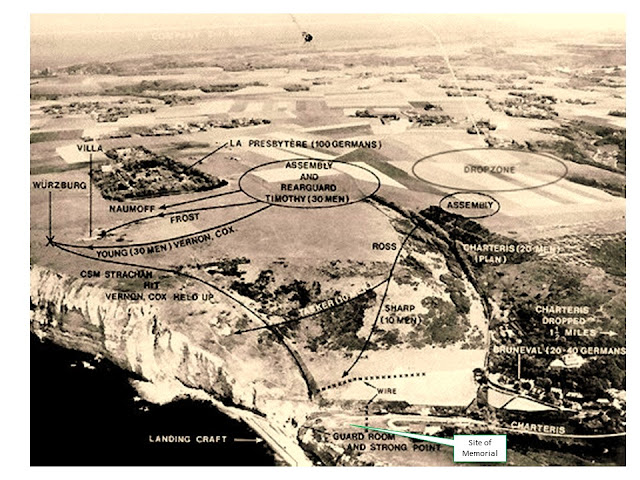 The three main assault parties headed for their respective targets and carried out their planned actions with minimal losses. The Germans present at the RECTANGLE were suppressed and unable to mount any form of successful counter-attack. 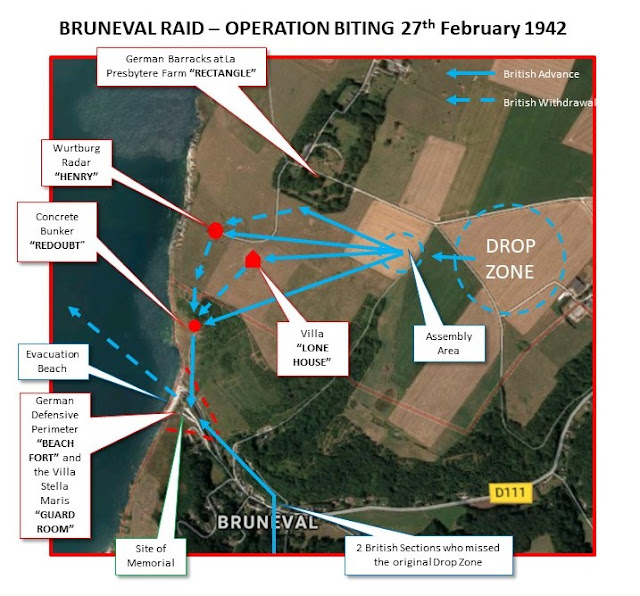 The reduced NELSON group – supported by the withdrawing Main Assault group dealt with the concrete bunker and headed for the main beach perimeter.

This proved to be a tougher nut to crack than expected but was finally silenced by the timely arrival of the remainder of NELSON group who had been dropped 2 km South of the drop zone.

Once the beach was secured the British force was evacuated by landing craft and returned to the UK.

To tour the area I would suggest start by driving to the village of La Presbytere. Here take the Rue Major Frost and head towards the coat (Westward). As you travel down this road (which rapidly becomes a dirt track!) towards the site of the RECTANGLE, look to your left and you will see the area of the drop zone.

On reaching the gates to the RECTANGLE, park up to one side and get out of the car.

Immediately to your front (hidden amongst the trees) you will see a concrete bunker. 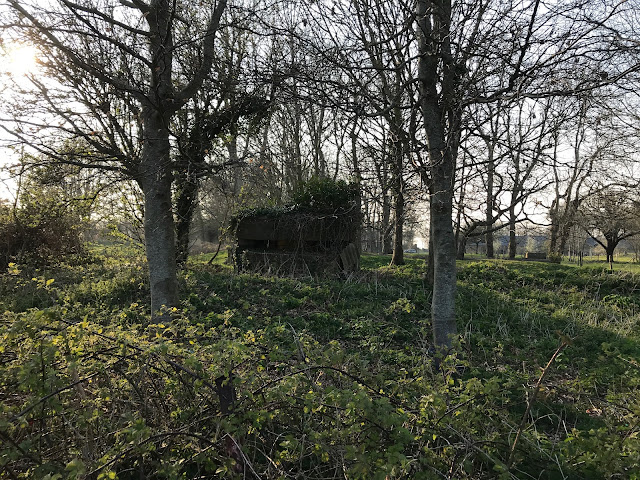 I guess this may have been added after the raid as part of Rommel’s beefing up of the Atlantic Wall defences, but cannot be sure. The farm and it’s derelict buildings are on private land, but it is possible to walk around the perimeter (heading to the left of the gate) and follow it round until the site of the Villa and Wurzburg Radar are visible. As you walk around you will spot additional bunkers amongst the trees. 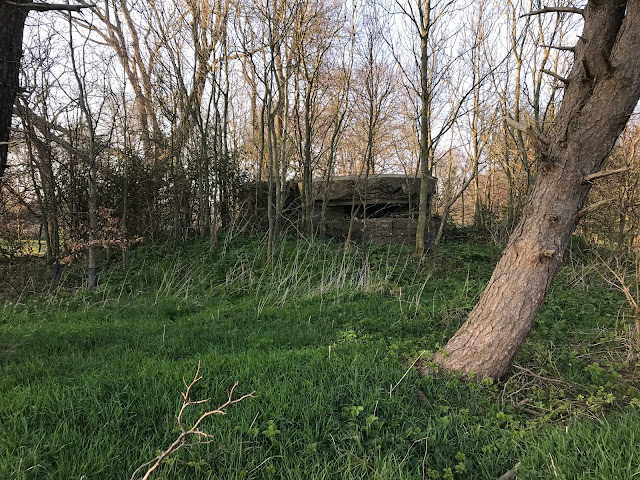 Today all that remains are the cellar and terrace of the Villa and several Concrete Bunkers surrounding it. 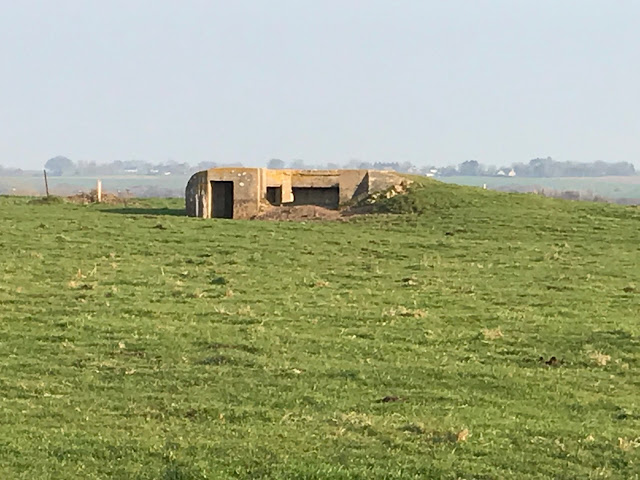 Again I’m uncertain if these are contemporary to the raid or later additions. They are fenced off with an electric fence and occupied by cows, so approach at your peril!! The Wurzburg position is 80-100m beyond towards the cliff. 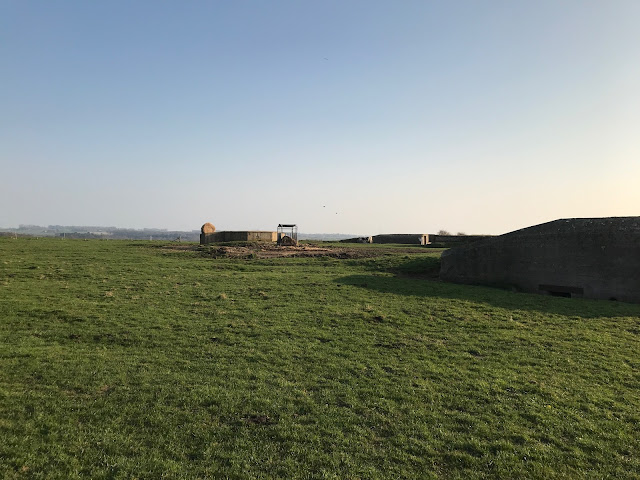 While you are there, if you look North along the coast you will see the present day lighthouse and beneath it you can make out some more Concrete Bunkers. This is where the supporting FREYA radar was positioned.

Now return to your car and follow the road back to La Presbytere.

When you reach the village square (with the church of St. Martin) turn right and take the D111.

Follow the D111 for 2-3km, through a wooded area, heading downwards towards the coast. This will take you through the village of Bruneval.

As you enter the village, on the left, there’s the hotel that was used by the German garrison as accommodation. The now single lane track takes you all the way down to the beach where there is adequate parking for several vehicles.

Park up and take a look around. Looking out to sea, to your left is the modern oil terminal that was not there in 1942.

To your right the steep cliff with the Concrete Bunker  known as REDOUBT just visible on it’s summit. 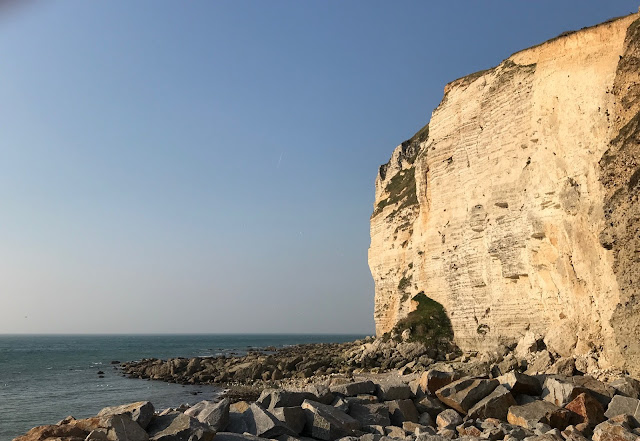 If you turn back to face inland on your left you will see the path down which the paras evacuated to the beach, and on your right a derelict hotel that stands on the site of the original Stella Maris used by the Germans as their GUARD HOUSE.


There is what looks like a bunker in front of the hotel, but I think this was something to do with a former swimming pool on the site. 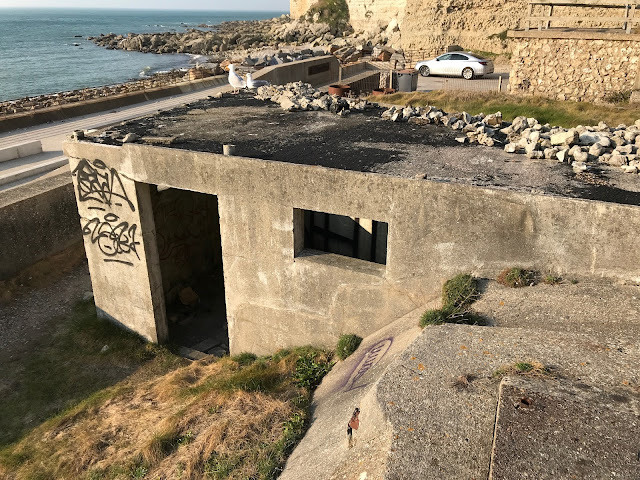 To the right of the hotel is a flight of stairs. These lead to the Bruneval Raid Memorial and explanatory tableau. 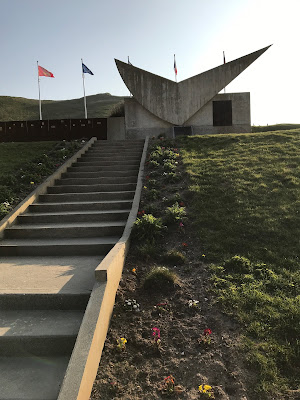 Climb up to get a good view of the cliffs opposite (and the REDOUBT) as well as taking in the memorial. Surprisingly the tableau is entirely in French…….but looks to be very detailed.

Illustrated with many familiar photos and maps. The memorial itself lists all those who took part as well as commemorating 2 Para itself. 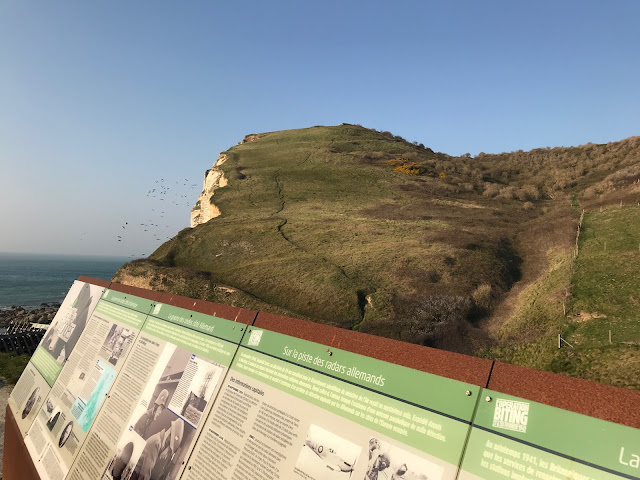 If you were feeling really energetic you could climb up the path to the REDOUBT on the cliff top! 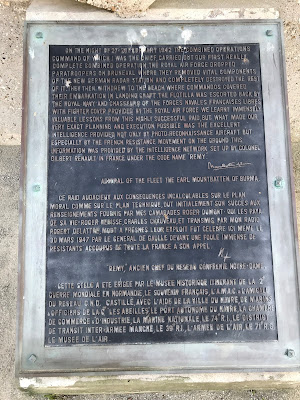 Climb back down and jump back into your car and if you think you’ve earned a reward, head up the coast to Etretat where you will find many excellent cafes and restaurants to refresh you! 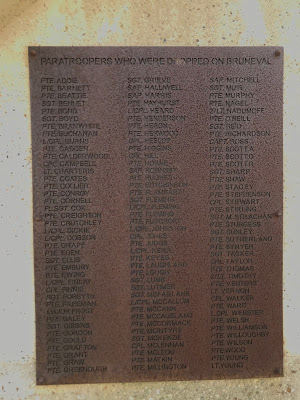 Altogether a very informative trip. It will only take you 1-2 hours to look around (with a car) and you will come away with your head full of wargaming scenario ideas and shopping lists for more figures and terrain!