A couple of week's ago I had the chance to visit the site of the Bruneval Raid once again.

Whilst there I took the opportunity to visit the Freya site at Cap d'Antifer, that wasn't part of the scope of the raid, but was just north of where the attack took place.

From the Rue de Major Frost in the village of La Presbytere, take the Rue de Phare towards the Lighthouse at Cap d’Antifer.

Visit the lighthouse and the German Naval Radar buildings around it before heading back the way you came. 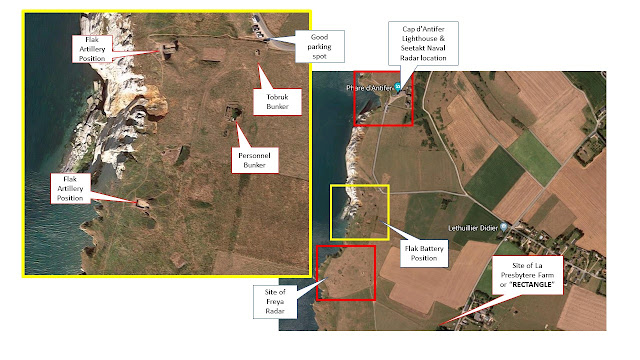 At sharp left hand bend, park your car by the gate. Here you’ll see immediately a good example of a Tobruk bunker. Now walk towards the cliffs and you can climb up onto the first flak position you come to.

From here you can view the other bunkers, the Freya base (in the distance) and the old entrance blocks that were either side of the flak position’s gate!


I also (rather foolishly as it was a very hot day) decided to climb up the path to the concrete bunker at the site of "REDOUBT".

The bunker is likely to be a later addition, but this was the path down which the raiders evacuated to the beach.

If you ever go there be aware that it is very steep, not very wide and very challenging!

I hope you find the photographs of the areas I visited interesting, and perhaps inspire you to take a look yourselves one day!
Posted by TimsTanks at 16:23